How high does the ground effect last?

Up to which height is the ground effect still significant enough to be taken into account? Would this height be sufficient to actually fly above the ground, overcoming at least trivial obstacles like trees?

The early transatlantic flights were done with heavy loaded planes that had difficulties taking off (only at the end of the runway, and only just). Could it be that these planes were flying within ground effect for rather extended distances, before picking enough speed to complete the take off?

When moving up from zero height, ground effect diminishes rapidly because the gap between trailing edge and ground opens up and the ram effect vanishes. Moving up further will also weaken the first effect until at a height of one semispan the flow will be very similar to that of the airplane out of ground effect.

To illustrate how much happens on the last centimeters (or feet), look at the two pictures which I took from this YouTube video: 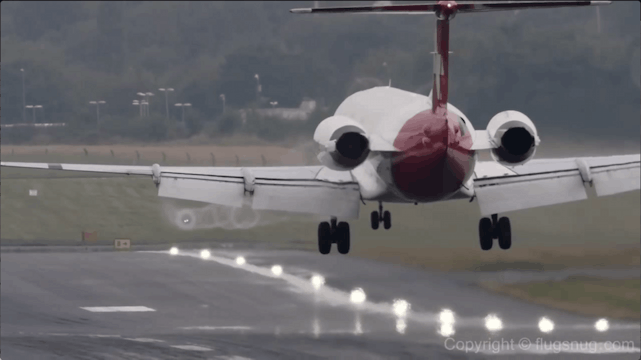 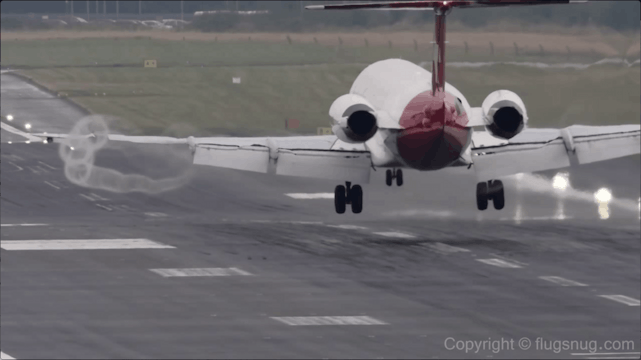 In the top picture the wing is clearly closer to the ground than its semispan, but the vortices from the flap edge trail straight behind the plane. Now move forward to the lower picture when the trailing edge is maybe half a chord above the ground. Now the trailing vortex is swept to the side because the flow, which is compressed below the wing, expands when it exits the gap between wing and ground. Additionally, the downwash becomes a sidewash, because it has no space below the wing left in which to drop.

This should demonstrate that most of the ground effect happens when the ram pressure below the wing builds up. Once the trailing edge is less than half the wing chord from the ground, this part of ground effect kicks in, and the aircraft sees a significant reduction in drag.

I remember studying that ground effect happens within one wingspan. Although it reduces when you gain altitude.

As mentioned in FAA’s Pilot’s Handbook of Aeronautical Knowledge:

It is also referenced here:

Ground effect height is primarily a function of the airfoil, and the "ground" surface. Smooth desert lakebeds have "better" ground effect than forest tree tops. Calm water is better than open water for smoothness.

As I recall, there have been several times where planes have operated in ground effect for substantial distances, such as military aircraft loosing engines at sea.

So to the OP questions:

Although it depends of the characteristics of the wings (shape, wingspan,...), as you said it can be useful to gain some lift. I would say from 5 to 10 meters (for a medium sized plane), the effect loses a lot of its efficiency. Unfortunately, I have no mathematical proof to back this up.

I don't know if you ever heard about them, but ekranoplans use almost exclusively the ground effect to "fly", however, they can't gain altitude like an actual plane would do. As @mongo stated, smooth surfaces are much better to take advantage of this effect.

Not the answer you're looking for? Browse other questions tagged takeoff ground-effect or ask your own question.

1
What are the limits of ground effect over water on an airliner plane at cruising speeds?
57
Is a winglet better than an equal span extension?
10
Why do wall-to-wall airfoils in wind tunnels produce no (or infinitesimal) downwash?
5
What is the typical touchdown angle of a large airliner?
4
Is there ground effect flying below an infinite 2D plane as opposed to above one?
2
Why does the effective alpha/CL increase at wingtip of swept wing?
1
Is there an ideal lift distribution for human-powered aircraft?
1
What were the L/D ratio of the A-90 Orlyonok at its different operational atlitudes?