How are wood and canvas wings able to sustain damp and bad weather?

Small aircraft have used and still use at least for wings, and perhaps for fuselage, material like wood and canvas, as visible on the bottom side of this wing: 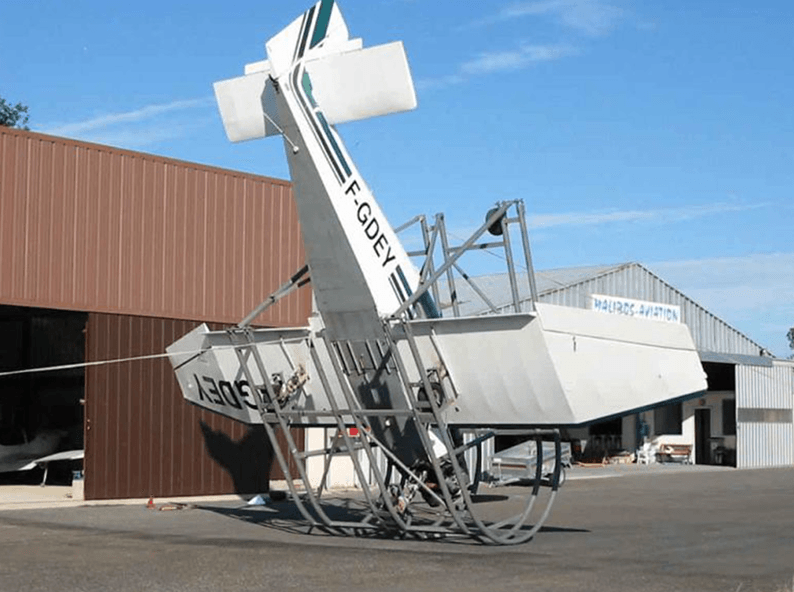 Which kind of fabric / which treatment are used? What are the limits:

Wood and canvas are not meant to be used in humid conditions. All outer surfaces are painted, so they are water repellent and can sustain a shower, but when left to the elements, wooden aircraft deteriorate rapidly. The unprotected structure will take up water and will warp. Wet canvas is less taut, many glues lose strength when wet and plywood will come apart over time. When a wooden aircraft has suffered a shower, it should be wiped dry and stored under a roof as soon as practical.

When Junkers introduced all-metal aircraft, they were sometimes the only types to fly because bad weather had made all other types unusable. In the war for independence of the Baltic states during 1919, the rapidly moving frontline made the use of aircraft hangars impossible, and only Junkers airplanes were able to operate on rainy days.

DeHavilland designed a sleek, four-engined airliner, the DH.91 Albatross, in 1936. The last three of seven built were put out of service after a crash in Shannon in 1943. This crash had made the fact obvious that the plywood structure had deteriorated beyond repair in bad weather, despite a fabric-and-dope cover to protect it from the elements.

The good thing about wood is its long-term strength. In stark contrast to aluminium, wood shows no fatigue under stress and allows to design a life-safe structure. When stored and operated properly, a wooden aircraft will last centuries. While the fabric cover will lose strength over time and needs to be replaced maybe every 20 years, the wooden structure needs no rejuvenation.

The maximum size of wood-and-canvas aircraft was demonstrated by the Caproni Ca.60, and that of wooden aircraft by the Hughes H-4. Both were the biggest aircraft of their time (1921 / 1947) and were bigger than a Jumbo Jet if you use wing area to measure size. However, fabric cover puts a low limit on flight speed, and indirectly on wing loading. The DH.91 had only 134 kg/m² and I would be surprised if any wood-and-canvas aircraft with a wing loading above 200 kg/m² exists. Even the plywood-covered DH.98 Mosquito had only 195 kg/m².

Now to the materials: Otto Lilienthal used osier stakes which he covered with nettle cloth. As far as I know, treatment was wax (applied dissolved in a volatile solvent). Early designs used linen or cotton and dope for glueing the cloth to the structure as well as tightening the cover. Since maybe 50 years those natural fibers have been displaced by polyester cloth because it has less of a tendency to rot. Still dope is used for glueing and tightening, and a finish of synthetic resin lacquer is used as topcoat.

Not the answer you're looking for? Browse other questions tagged aircraft-design wing composite-materials or ask your own question.

23
Would it be feasible to build a jet fighter plane based on a wooden construction?
37
Why did the Junkers Ju-52 have corrugated external surfaces?
25
Which airplane designs have the greatest longevity?
0
Can I use parachute fabric to cover an aircraft fuselage and wings?

8
How are folding wings managed?
12
What are the pro/cons of polyhedral cranked wings?
6
What are the differences between wings made for 2 engines and wings for 4 engines?
9
Were stub wings on early flying boats designed or able to exploit ground-effect lift?
3
Are high lift wings bad for faster speeds
16
For airliners, what prevents wing strikes on landing in bad weather?
13
Why are longer wings with foldable wingtips used on the B777X instead of lighter ones with original size?
1
How heavy are modern cantilever monoplane wings?