The following [edited] images are from a network post: 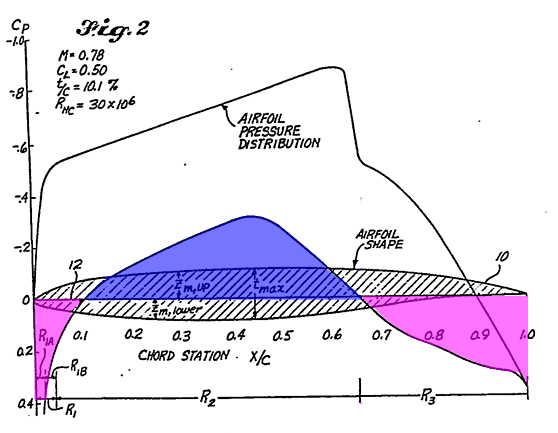 On the bottom image, the $C_p$ varies.

According to the pressure coefficient equation:

The area marked in blue for the pressure side ($C_p$ in the negative), the pressure is lower than the freestream. In magenta (the leading and trailing areas) it's greater than freestream. (If I'm reading this correctly.)

When all areas are combined for straight-and-level flight, what would the overall pressure be in relation to the freestream? Is the top image still correct with an overall greater pressure?

The question came up in chat and I'm not sure anymore. Of course pressure distribution will vary with speed and airfoil shape, so it's a general question. Any extra information on how speed/shape affect the pressure side is welcome of course.

The depicted airfoil is operating in the transonic-regime. This means the free stream velocity is close to the speed of sound (M=1). Caused by acceleration of the air on the suction side of the profile the air flow will reach supersonic speeds. The rapid increase in $C_p$ at the suction side is a shock.

The following picture shows the Mach-number-distribution around an airfoil in the transonic speed range. 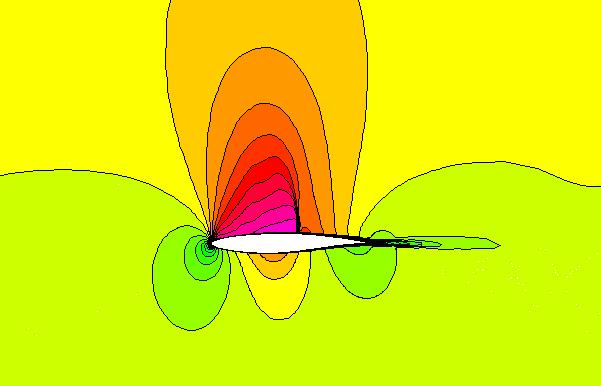 The term $\frac{1}{2}\rho V^2$ is a representation of the dynamic pressure for very low velocities (M<<0.3). Of course this equation can also be used for higher Mach-numbers, however the results (in terms of self-similarity) will contain a large error. Therefore, $p_0 - p_\infty$ should be used to avoid this.

During level flight (design-speed@design-AoA) there will be a stagnation zone at the leading edge of the airfoil. This results in a pressure higher than the static free-stream pressure. After that the flow will be accelerated resulting in a reduction of the pressure. Often, this reduction will result in a $C_p<0$. At the trailing edge the pressure of suction- and pressure-side have to be equal, so the pressure rise of the aft-section of the airfoil-pressure side will be adjusted accordingly.

For low Mach-numbers (e.i. low free stream velocities) the pressure on the pressure-side is likely to be very close to the ambient static pressure.

As always with the (elliptic) aerodynamics it's a bit chicken-and-egg. Lets assume (Caution! this is a very simple point of view) there is only one design objective (lift). Then the pressure-distribution on the pressure side needs to fulfil two boundary conditions. 1) high pressure ($C_p$) at the leading edge which is a result of the free stream velocity and 2) the pressure ($C_p$) at the trailing edge which is given by the pressure-distribution on the suction-side. Now, the airfoil-designer needs to find a profile-shape which fulfils both requirements. Whether the $C_p$ becomes negative or not is not of importance, as long as it stays above the $C_p$ of the suction-side and there is no risk of boundary-layer-separation (which is likely to cause missing the pressure at the trailing edge).

Since there are no simple answers to complex problems, I truly beliefe the best thing would be to install Xfoil (or its successor) and try it out.

0
Is pressure lower than ambient on the pressure (bottom) side of an airfoil?
1
When the angle of attack is increased does the air flowing below it slow down
12
Why does the wing root of the A330 have a pronounced twist?
0
Bernoulli Principle -- Reversed
0
What happens when the velocity of the lower surface of the airfoil is lower than the velocity of the free stream?