I've noticed that the flight BR087 from TPE to CDG doesn't follow an orthodrome.

Instead, it seems to take great pains to avoid the Chinese airspace entirely. 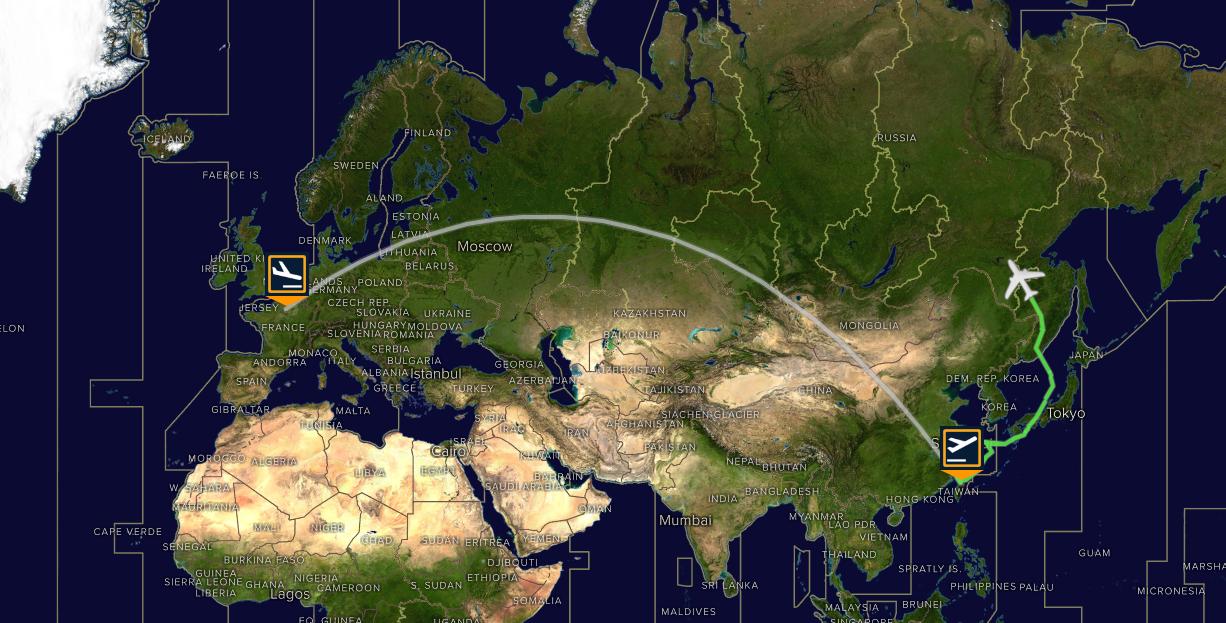 Why? EVA Air has other flights connecting Taiwan to China.

EVA Air is Taiwanese. Taiwan and People's Republic of China are not on the best of terms (publicly).

The relations between China and Taiwan have been characterized by limited contact, tensions, and instability, due to the fact that the Civil War merely stopped without formal signing of any peace treaty and the two sides are technically still in a state of war.

The details of the bilateral Air Service Agreements (ASA's) are not public though. Treating airlines differently is supported by a discussion on airliners.net.

EVA Air does land in Mainland China, but that's only recently. That's because ASA's are not black and white. (Both economies have been on good terms lately.) An example of the limited liberalization:

The first direct commercial flights from China (from Guangzhou) to Taiwan since 1949 arrived in Taipei on January 29, 2005.

About 70% of the Chinese airspace is military controlled, i.e., the military may choose to allow KLM, but not EVA Air.

Aviation experts agree that one of the main problems in China is the fact the country’s airspace is largely controlled by the military, leaving little room for civilian aircraft even as the domestic airline industry booms. According to the state-run China Daily newspaper, less than 30% of China’s airspace can be used by commercial airlines, compared to about 80% of the airspace in the United States (BBC, April 2016).

As DeltaLima mentioned, KLM operates a subsidiary on those routes, KLM Asia:

A wholly KLM-owned subsidiary registered in Taiwan was established in 1995 to operate flights to Taipei without compromising the traffic rights held by KLM for destinations in the People's Republic of China.

Here is another example a couple of hours apart (do note China Airlines is Taiwanese). 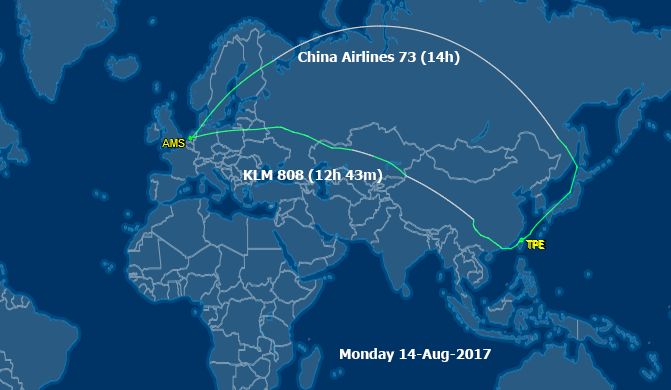 Not the answer you're looking for? Browse other questions tagged airspace airlines flight-path or ask your own question.

106
Why do airlines follow these routes between Barcelona and Düsseldorf?
7
Do overland long-haul flights have something similar to SELCAL?
1
Why do airlines not use direct routes?

3
Why is the flight path from Taipei to Tianjin not a straight line?
8
Why doesn't the US have a flag carrier airline?
20
Why didn't Air India always fly DEL-SFO over the Pacific?
2
Why has the Bombardier CSeries been delayed in starting service with Delta Air Lines?
2
Why was Air India flight AI101 diverted to SHJ 5 times in the past few days?