Why did some Caravelles have a very long dorsal fin?

Why did some Sud Aviation Caravelles have a very long dorsal fin stretching half the fuselage?

Initially I thought it's to keep the fin low to fit in existing hangars as a selling point, but the variant shown above (10B3 Super B) can also be found without this fin:

There are two competing theories on airliners.net forums. One of them says it's fuselage strengthening for over-water flights in case of ditching. The other is a housing for an optional HF antenna. As far as I know, an old HF antenna was a stretched wire.

I checked the English, French, and Swedish Wikipedia articles, only the Swedish mentions it:

The aircraft was also equipped with a long dorsal fin (Google translate).

A Flight issue from 1956 does not show the fin in their cutaway (the article also does not mention it). 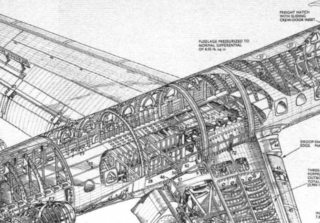 The dorsal ridge housed avionics and HF antennas. From this document:

The most noticeable difference are the larger cockpit windows and the removal of the dorsal fin (the long fin on top of the fuselage), that housed avionics. The 6R's not built for United did have the dorsal fin, though.

This is a non metallic radome. It protects the antenna from aerodynamic effects, and from water and ice which damage antenna electromagnetic characteristics. Closer view:

These features were not useful when flying over populated land, where VHF aids and VHF communication were possible.

There is a list of C/N without the dorsal fin in this forum. When the antenna is not under a radome, it looks like this:

See also: What is this wire going from mid-fuselage to the tail on this 737?

Progress in antenna design and receivers with (hugely) increased sensibility allow for smaller antennas, that can afford to be vertical with some signal losses. Today HF antennas tend to be vertical and under a radome at the leading edge of the vertical stabilizer:

Helicopters, civil and military still use long wire antennas as antenna rails when they need HF:

See also: What is this pipe on the tail of this helicopter?

15
What is this pipe on the tail of this helicopter?
13
What is this wire going from mid-fuselage to the tail on this 737?
0
What is the exact purpose of the string attached between front fuselage & the tail section of the transport aircraft's?

46
Why did the Ju-87 Stuka have a siren?
19
What is the purpose of a dorsal fin such as on the Boeing 737?
4
How many versions of the P-51 dorsal fin fillet are documented?
37
Why did the Junkers Ju-52 have corrugated external surfaces?
9
Why doesn't the A320 have a dorsal fin like the 737?
8
Why did it take so long for helicopters to be developed/in use?
25
Why did WWII prop aircraft have colored prop tips?
13
Why did the F-104 Starfighter have a T-tail?
31
Why did the DC-3 have wing sweep?