What performance issues/symptoms can a pilot expect while taking off above MTOW?

Lately I've been flying a Cessna 162 Skycatcher, primary as a cheap way to build time towards the Instrument Cross Country requirement and my glider club's hours requirement to tow gliders.

One issue with the 162 is it's relatively low Useful Load. Here are some figures relevant to my question:

Note: All Weights above are in pounds(lbs).

Because weight is an issue with this plane and almost any passenger I would consider bringing along, there is a diagram in the FBO's flight book that can be shown to the person fueling that depicts points inside the tanks that denote full, 3/4, 1/2, etc: 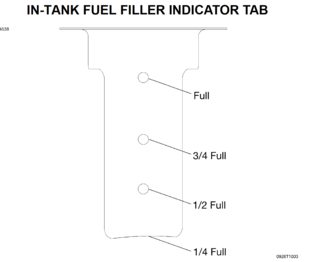 Last week, I did a flight with a 130 pound passenger. On the first refueling I was sure to show this diagram to the person filling to ensure he only filled to 3/4. I generally make it a habit to inspect the tanks after fueling to ensure they have not gone over the asked for amount. Takeoff was normal with no noticeable degradation in performance. Note: the fuel gauges in the 162 tend to show the same value whether the tanks are full or 3/4 full, with no noticeable decrease until until values go below 3/4.

We then proceeded to fly roughly 1.5 hours to another airport. At that airport, I went through the same routine but (in a hurry of course, isn't that how most mistakes are made!) I did not follow up to ensure he had not "overfilled" the tanks. On takeoff, I noted a notable (though by no means catastrophic) degradation in performance:

As I was able to climb at a safe enough airspeed, things seemed to stabilize and I had no other issues, I chose to proceed with the return flight. Performance for the rest of the flight was fine with no extra RPM needed to cruise or do later climbs.

It wasn't until I was thinking about it later that it occurred to me that the refueler might have filled my tanks to full.

So my question is, do these symptoms sound indicative of being overweight? Or, more generally, What performance issues can a pilot expect while taking off above MTOW?

Note: I have reviewed several questions related to this, including:

However, I didn't find a question dealing specifically with the performance degradation felt by a pilot taking off above MTOW.

After thinking on this a bit more, reading some of the answers and talking it over with my daughter (the passenger mentioned and a pilot in her own right), I'm leaning towards a different conclusion. Since I was first checked out in the 162 last winter, this was the first time I'd had a passenger. My first takeoff was from KJYO (5500 feet runway length / 390 ft elevation), whereas my second was from Eagles Nest (W13) (2004 ft runway length / 1436 ft elevation). My new theory is that what I felt on the second takeoff was the added weight I wasn't used to since I've flown the previous 20+ flights alone. I believe I didn't notice this as much on my first takeoff because I had much more runway to work with.

Nonetheless, I think the question and answers are still relevant/useful.

Firstly, you did goof up by not checking what the refueler did. Your life depends on that fuel, and in light aircraft the gauges are notoriously unreliable. We've probably all done it but we shouldn't - always check!

However going off your figures you might have been what, 20 pounds overweight? That shouldn't cause such a massive decrease in performance. MTOW isn't an on/off switch. It's a point that has been selected as the maximum allowable limit - with a safety margin built in. You should never exceed MTOW even by a bit, but if you do you will (hopefully) live to see your kids birthday thanks to that margin.

I've flown a C172 right at MTOW (actually about 5kg under but close enough). Acceleration is slow, meaning you use more runway. Rotation actually feels normal thanks to ground effect, but once you leave that you notice a degraded climb performance. If you're over MTOW these effects are the same but amplified. If you are very overweight, you will climb in ground effect but will struggle to go much higher than 20-30ft.

As for your flight though, it could have been affected by a tailwind or high temperature/low atmospheric pressure. What was the temperature like on the second leg? Vy will theoretically get you the best climb rate even above MTOW so it doesn't make sense that you could climb below but not at that speed. Maybe there was something localised affecting the ASI, or, if I may be so bold, your technique on the day wasn't 100% :)

It's possible you were overweight, a longer takeoff roll and degraded climb performance are definitely symptoms, however there are other possibilities as well, for instance a higher density altitude. Assuming you are in the northern hemisphere and therefore in summer, a couple of hours can make a big difference temperature-wise, and therefore to your density altitude can be much more than you might expect. Let's compare a sea level airfield at standard pressure when it's 50 degrees F (11C) versus 90 degrees F (32C), at 50F the DA is about 450ft, at 90F it's closer to 3000ft (dew point dependent). An airfield at 1500ft elevation at standard pressure and 90F temperature would be 4700ft density altitude. A high density altitude also makes for a much longer takeoff roll and decreases climb performance.

It's possible you may have been both a shade overweight in hot and/or high conditions, which would make for an uncomfortable beginning of the flight.

Provided that you don't run out of runway, you will probably get unstuck, but perhaps then you won't be able to fly above ground effect. The MTOW figure has usually a considerable margin of tolerance, but a pilot should follow the rules exactly, and consider it an absolute limit...

Yes, MTOW is there to save your neck, BUT - there will come a time when you decide that it is necessary to exceeed/ignore it, for whatever reason seems good to you. Each situation needs careful analysis. Understand that MTOW changes with temp / density alt/wind/Rw length /rw slope/even safety margin inherent in the a/c design, such as power reserve amd wing section polar. We are talking extreme situations, such as PNG mountain strips, <1700 length, 5000'high, 25 C, and passengers determined to fill by volume. Overweight of 20% useful load can usually be accomodated by technique, you need to know flight in ground effect, use of thermals and, of course, fhe terrain ahead. Older designs often have a bettter margin than more modern types. DC3 have been known to get away with 200% of useful load, a popular usa light 2/4 seater was fatally overweight, inquest found that it would have been overweight with pilot and zero fuel, not the pilot, 3pax, luggage and full fuel they attempted T/O with. I have flown a seriously OW Aztec, but I had lomg sealed strips both ends and leaving the high country behind. I didn't calculate TOW, didn't want to frighten myself.

Not the answer you're looking for? Browse other questions tagged aircraft-performance takeoff weight-and-balance or ask your own question.

23
Does weight and balance of an airplane matter more on takeoff?
13
Can a commercial airliner be too heavy to take off?

13
Can a commercial airliner be too heavy to take off?
30
How does a commercial airliner measure its weight/mass?
11
How do airlines handle uncertainty in passenger weight for weight and balance calculations?
20
Why is the takeoff decision point based only on speed and not time or distance?
6
Under which conditions is full rated power instead of METO power required for takeoff (DC-3/C-47 with Pratt&Whitney 1830 twin wasp engines)?
2
What margin of error should one reasonably allow regarding aircraft performance?
14
What would be the challenges to taking off and landing a typical passenger jet at FL300?