If no low-speed compromises were made, what would an ideal Mach-3 wing look like?

But let's just say, hypothetically, you don't need good low-speed performance at all. So no such compromises in the wing shape. What would an ideal Mach-3 wing look like?

The goal is to have a wing with the highest lift-to-drag ratio at Mach 3.

I chose Mach-3 because that seems to be the limit on what jet aircraft have been put into production (MiG-31, SR-71) (which does not count experimental aircraft).

I'm interested in conventional designs, not things like the Blended-Wing-Body. So presumably this ideal aircraft would look similar to the Concorde or Tu-144.

Some things I've noted over the years:

Note: I don't need a complete 3D model of the wing shape. I'm more interested in things like what planeform it has, what anhedral/dihedral if any, etc.

One Mach 3 design which did not care about low speed characteristics was the Lockheed Q-12 / D-21 reconnaissance drone, which used a Marquardt RJ-43 ram jet for propulsion and had a flight Mach number of up to 3.5. It was initially air launched from the back of an A-12 / M-21 and crashed when fuel ran out. The purpose was deep penetration of hostile airspace to perform photographic reconnaissance in pre-satellite days. When later the launch aircraft was switched to the B-52, the D-21 needed an enormous booster to bring it up to its cruising speed of Mach 3.35.

This should be closest to a uncompromising Mach 3+ design; however, it drew massively on the aerodynamic work with the A-12 / SR-71, so probably the solution space was restricted from the start. 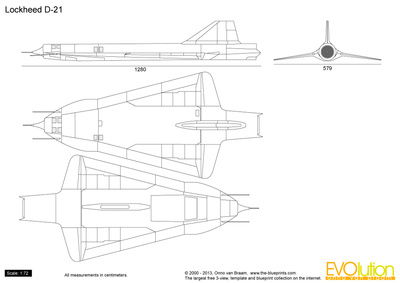 D-21 three side view (picture source). The anhedral was needed to compensate for the rolling moment of the high tail in sideslip. An even more uncompromising design would had used a smaller vertical and an equal fin on the lower side and no anhedral. The lower side fin, however, would have made the air launch from the back of the A-12 impossible.

All surfaces had sharp trailing edges. A wedge-like cross section like the tail of the X-15 only starts to make sense at speeds in excess of Mach 5 when using drag for directional stability is more effective than adding more tail surface.

Not the answer you're looking for? Browse other questions tagged aircraft-design wing supersonic or ask your own question.

17
Why are delta wings not commonly used in commercial airliners?
19
Why is the Tu-144 the only commercial airplane with canard configuration?
12
What are the advantages and disadvantages of a delta wing compared to a swept wing?
32
Why doesn't the Concorde have any wing fences?
12
Can a supersonic plane use a subsonic wing if the nosecone shock produces subsonic airflow around the wing?
4
What would the pros and cons be of this 'zig-zagged' high-sweep wing planform?
2
Why are there so many aircraft designs which look generally profoundly similar?
7
Could Mach 1.4 be a better design point for SST?