Drop the rope or drag the rope?

I was the safety officer at a glider operation earlier this year and we had a new tow pilot who forgot to drop the rope. By radio, I instructed him to drop the rope before landing. The downsides of this is that it would temporarily leave the rope in the middle of the grass field where an aircraft might run over it, and also someone would have to golf cart out to retrieve the rope.

Later, when he found out about it, the chief tow pilot got angry about this and said the tow plane should have landed with the rope attached and dragged it back to the launch location. I thought this was unwise because this could damage the rope, or if the rope were to catch on something as the plane landed, it could have dangerous consequences for the tow pilot. Also, I have seen loose tow ropes whip around. Considering that there is a metal buckle at the end of the rope, imagine that thing whipping around. If the plane landed with the rope attached, I was picturing that buckle whipping into a bystander or a parked plane.

Of course, the third possibility is that he could do a go around, fly all the back and do the rope drop correctly. The disadvantage of this is that it would delay the return of the tow plane for another 10 minutes while he did the go around, and we had multiple people waiting for tows.

What is the best procedure?

To start: I flew gliders for 8 years at a field on the northern edge of KPHL's mode C veil and never saw a towplane (purposely) drop a rope for a non-emergency. We operated out of a grass field surrounded by trees on most sides (maybe 10 miles south of KCKZ) and never had problems with towplanes landing with the rope attached.

There are some factors here that feed into this. That particular field (http://www.pgcsoaring.com/) has generally well taken care of and is a completely turf field. I think we added some lime markings to denote a landing box on our usual landing runway, but that's about it. I have a picture of the runways used for normal operations below. Takeoffs were started on the far right on runway 25 (picture has been rotated), and landings, typically, were facilitated on the runway marked by a dashed line. 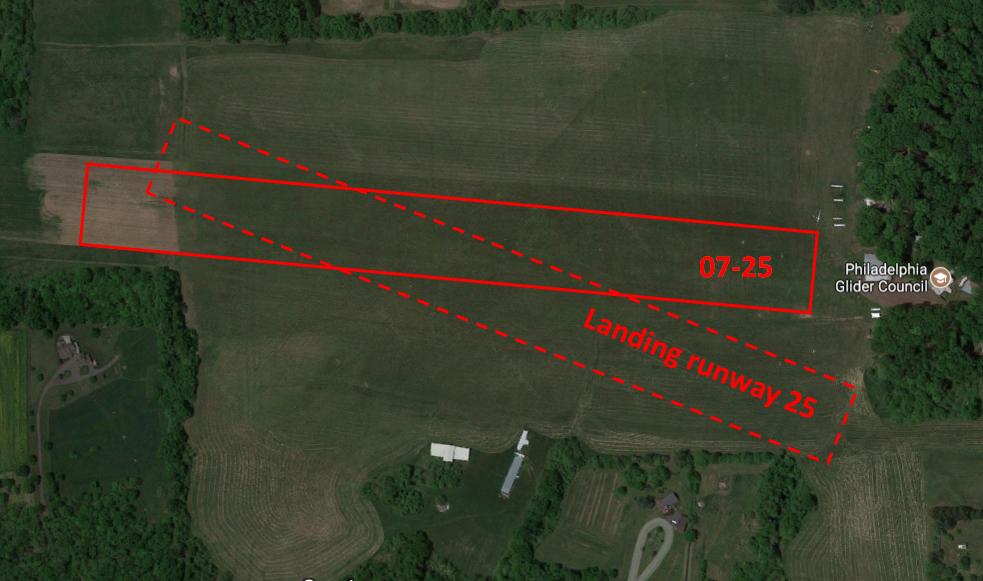 Now, something that isn't quite clear from the overhead views are the trees. At the far right hand side of 07-25, you have a stand of trees (and two hangers) that go up 40-50 feet. Landing over these, particularly with a tow line, can put you out in the boonies if you want to make sure that the tow line isn't dragging through the trees. The FAA Glider Flying Handbook (https://www.faa.gov/regulations_policies/handbooks_manuals/aircraft/glider_handbook/media/gfh_ch12.pdf) indicates that a 200 ft tow rope can "fly" about 130 ft below a towplane, so clearance in that dimension is critical. The pictured field actually has 3 operating runways (07-25, 01-19, and 13-31) and, on the approach to each (save 25), there are no trees near the runway threshold or the runway is situated at the top of a significant hill.

Insofar as ground abrasion goes, I'd see wear and tear on a towline over time, but it was relatively slow accumulation. Slow enough that you could track it by rope checks at the weak link (if in use) and tow hook prior to each flight...which you are probably doing anyhow. We always had a spare rope spliced and on a reel so that an in-use line could be quickly replaced during normal operations (maybe a minute or less during a regular takeoff if it was coordinated well). But that's more or less semantics: the point is, for the turf field we had, which was well-cleared of rocks, branches, or man-made debris, there were no problems with dragging a rope over the ground provided that pilots and line crew were doing the routine safety checks that they would be doing regardless. Not dropping a tow line also kept down non-airplane vehicle traffic on the field during operations (i.e., it eliminated the need for another runner to get the tow line, especially when aircraft are anticipated to be landing).

The Glider Flying Handbook has this much more to say about landing with a tow rope (GFH 12-10):

Landing with the tow line attached is not prohibited by regulation; however, the following points should be considered:

Besides, normally we were charged with getting to the ground quickly to get another tow up. So full authority slips, etc. all resulting in a steep approach with no danger of hitting the trees at the perimeter of the airport.

From my perspective there are risks either way, and I prefer not dropping anything prior to landing. For one thing, it takes time, and when 3 or four planes are towing, and there are gliders recovering, and now tow planes have to come in for a low pass to drop the rope, it gets even more chaotic. Chaos precedes stupid things happening.

The tennis ball trick is nice, but I just used a short streamer of surveyor tape. It kept people busy trying to figure out the color code (pink, orange, green, chartreuse, fuscia, you name it. I heard all kinds of theories, but each morning, I would just pick a 2 ft section of one tape or another from my trunk. Or let some young kid decide.

That streamer got more attention to where the rope was, though.

To add another datapoint, I flew gliders in Argentina for 15 years, in many airfields (both club operations and competitions with up to 80 gliders) and I very rarely saw a rope dropped by a tow plane. Our club often did 30 to 40 tows per day on weekends, so it would have made a big difference to have to retrieve the rope each time. Wear and tear from dragging during the landings was not a big issue; we had to replace ropes from time to time, but it was a very uncommon thing to happen as long as we avoided knots to stay on the rope.

I also flew for a few years in western Canada, where dropping the rope seemed to be the standard, even in fairly remote places where it was easy not to hit anything.

I have seen glider clubs do both. My preference is toward dropping the tow rope prior to touchdown, then having a recovery crew bring it back to the launch site in order to prevent abrasion and or grinding debris into the fibers causing structural damage. It also prevents damage to the line or the aircraft in the event the rope snags obstructions during rollout. Conversely, leaving the tow line attached does facilitate quicker turnaround time for the towplane allowing for multiple glider launches in minimal time.

Not the answer you're looking for? Browse other questions tagged ground-operations glider or ask your own question.

25
Is there a maximum lift to drag ratio?
3
What is the power rating of the ground power unit for Bombardier Dash 8 Q400?
7
How high do they cut the grass on airports?
2
How can I determine the amount of trim drag?
1
Is it possible to obtain the lift and drag coefficients of a 3D body in ANSYS Fluent?
5
What are the names of the vehicles to provide assistance to aircraft during the turnaround?
16
Is there an abnormal condition that could have caused this fatal accident involving a stall?
2
What's the difference between CPM and LDM?