Can one fly up side down while a glass of water keeps full due to g-forces?

If one makes a looping for example with a plane and the g-forces that the planes makes will keep the water in the glass, but if one is at the top of the loop is there still enough g-force to keep water in the glass?

Yes, as long as you continue the loop, and don't fly the plane in the upside-down position.

See, for example: Barrel roll with a glass of water on a glider

Can one fly up side down while a glass of water keeps full?

Yes, but given the speed of the aircraft, it must fly a more or less tight loop. For an aircraft at 160 km/h the radius of the turn must be smaller than 200 m. On the other hand for a fighter at 500 km/h, the radius may be as large as 2 km.

In both cases the force due to the turn is 1G positive (assuming the turn is "nose up"), that is the body and objects within the aircraft are pulled towards the outside of the turn. When they are at the topmost point of the turn, this force is vertical towards the sky, this 1G balances exactly the gravity and everything is weightless, as this dog.

Aircraft flying a vertical loop with a glass of water: 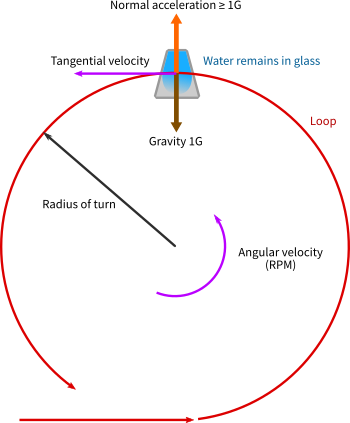 The interesting instant is when the aircraft reaches the top of the loop. Forces on water:

We must balance gravity

To prevent water from flowing out of the glass, forces exerted on the water must have a resultant (sum of vectors) which is going away from the ground.

As both forces are proportional to mass and accelerations, we can remove the water mass from the equation, and just keep the accelerations. This means we need to have a normal acceleration equal to or greater than gravity acceleration.

Calculation of the normal acceleration

Gravity acceleration is indeed a fixed value: 9.81 m/s². Normal acceleration $a_c$ itself is proportional to the radius $r$ of the loop and the angular speed $\omega$ of the aircraft (the angular speed is the RPM, but expressed in radians per second): $a_c = \omega^2r$. So to prevent being watered, we need to have an angular speed such that $a_c \geq g$, that is $\omega^2r \geq g$

Back to speeds and RPM

Given a radius, we must fly at some minimal speed to neutralize gravity. Or given a speed we must decrease the radius to a maximal value. Here is a table for some values of radius. At the corresponding speed normal acceleration balances gravity (the number of loop rounds per minute is also mentioned).

Flying at a higher speed or with a smaller radius will just push water deeper in the glass.

Special request for @DeltaLima, when flying a loop the size of the Earth, (well in practical this means flying horizontally but inverted), then to prevent gravity to empty the glass, you need to fly in excess of 28,000 km/h. That's what they do in the ISS. I guess we closed the loop on the topic.

If the loop is continued, the G at the inverted position is a function of airspeed and AOA demand on the aircraft (and the resulting nose track). If the airspeed is allowed to decrease near stall speed, it is possible for the aircraft to experience less than 1 equivalent G (causing the water to pour out of the cup). If the pilot flys the loop to allow for 2Gs across the top of the loop, the pilot will feel 1G into the seat (2 total Gs minus the 1G of God's G), allowing water to stay in the cup. Really, 1.01 G inverted at the top of the loop will result in a 0.01 equivalent positive G, keeping water in the cup.

Not the answer you're looking for? Browse other questions tagged pilot-technique aircraft-physics g-forces or ask your own question.

11
Why do we feel gravity on a plane?

11
How are aircraft controlled that have no forward view out of the cockpit?
3
What are maximum G forces humans can survive?
3
What does 'laterally aligned' mean in this description?
8
What exactly is a “coordinated” turn?
1
Forces “felt” by pilot, G-meter, inclinometer--are they the aerodynamic forces generated by the aircraft, or the sum of weight+centrifugal force?