Why does Turkish airlines still fly over Iraq, is it safe?

I realized that Turkish Airlines have a lot of flights over Iraq. For example, here is a flight from Istanbul to Maldives (TK 730). 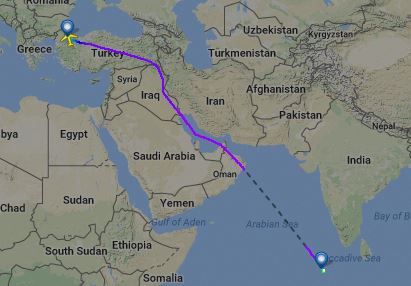 Do you know if it is safe to fly there? Till today I thought that flight space over Iraq was closed for commercial flights.

Flying over conflict zones has been a common practice at all times. However after MH17 was destroyed over Ukraine some changes occurred.

From an overall standpoint, EASA, the safety agency for the European Union, has an active information bulletin dated March 31, 2017, which is the extension of one issued on December 23, 2015:

Iraq airspace, all altitudes.
This CZIB applies to operators.
This CZIB is valid until 30 September 2017

Due to the hazardous security situation, with the presence of terrorist organisations and ongoing high intensity military operations, there is a risk of both intentional targeting and misidentification of civil aircraft. The presence of a wide range of ground-to-ground and dedicated anti-aviation weaponry poses a HIGH risk to operations at all flight altitudes.

Operators should take this information and any other relevant information into account in their own risk assessments, alongside any available guidance or directions from their national authority as appropriate.

It must be noted that Turkey while not a member of the EU, is still a partner of EASA and Eurocontrol.

On their side, the Iraqi Civil Aviation Authority states the sky over Iraq is safe.

Bottom line, operators have been informed of a high risk, and must evaluate their individual situation based on this warning and all other elements they can get on their own.

As mentioned by EASA, operators must comply with national directives if any.

In addition of Air France, many airlines have stopped flying in Iraqi airspace: press articles mention e.g. KLM and Qantas, Lufthansa and Royal Jordanian, and many other similar information can be found online.

The situation of Turkey is a little bit complex. Their have a southern border with Iraq and Syria, and the Sinai peninsula is also a conflict zone.

This may push operators to take more risks than others with southward routes.

Not the answer you're looking for? Browse other questions tagged safety airspace flight-path or ask your own question.

7
Apart from Kenya, what are the current dangerous / unsafe airspaces?

11
When do conditions permit doing a controlled fly-by over the runway of a commercial airport?
3
Under what conditions would a helicopter be allowed to fly at low altitude over populated areas?
8
How to reasonably determine minimum safe altitudes over city? (fixed wing)
9
Do modern flights and pilots have reservations about flying over the Bermuda Triangle?
30
Why does Turkish Airlines avoid Israel when going to Amman, but not on the return leg?
13
Why would Emirates fly over Iraq, avoiding Iran?
4
Why does Qatar Airways fly over Syria and Iraq?
4
When can airliners fly from Israel over Tunisia's and Algeria's airspace?
5
Is it safe to use a propeller plane to fly commercially over the Tibetan Plateau?