What's the benefit of this long flight (apart from marketing)?

The post Do promotional flight routes have a historical precedent? asks about previous occurrences.

I'm guessing this flight (shown below) was a test flight, as well as being a marketing attempt.

For a test flight, what would the benefit be? 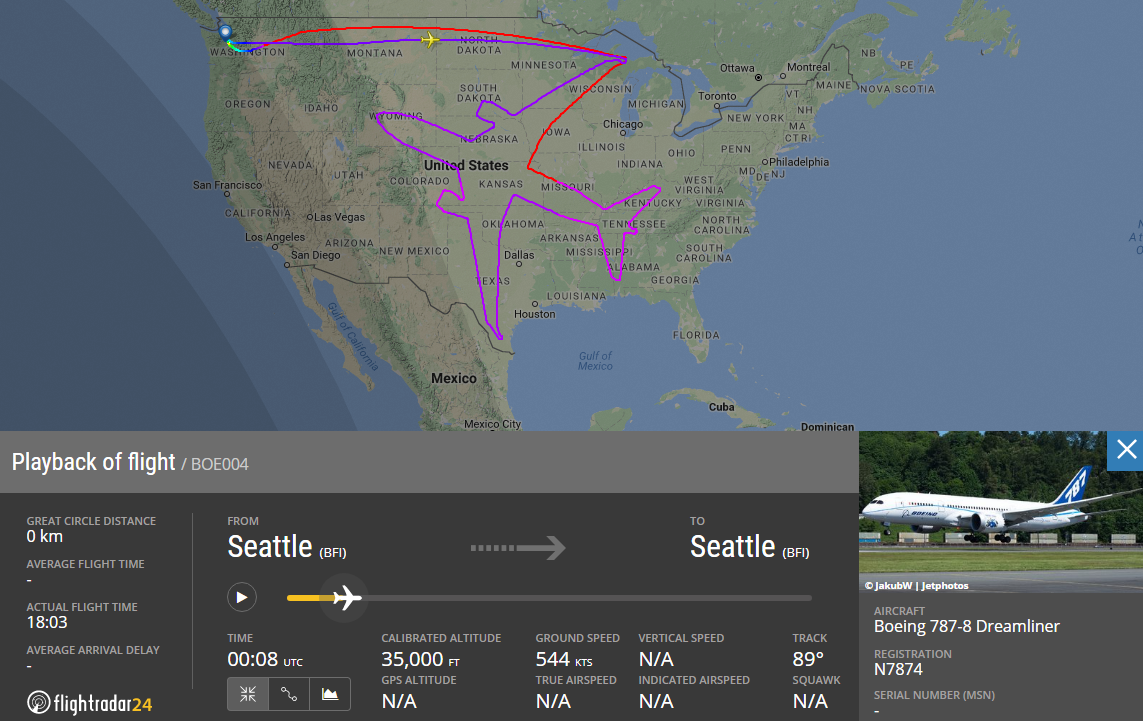 From the this link:

At 15:38 local time N7874, the fourth 787 built, departed Boeing Field in Seattle for an 18-hour, 22 state test flight. The crew spent the overnight hours above the United States performing ETOPS testing on the new Rolls Royce Trent 1000 TEN engine, which will power the 787-10.

Also this video from the above flightradar blog link.

The 18-hour flight was to test ETOPS, and there's no harm in some marketing as well. Also since the flight will be coming back to Seattle, it makes sense to keep the flight above the US, and near airports. Compared to venturing out in the ocean on a test.

Not the answer you're looking for? Browse other questions tagged flight-path flight-testing boeing-787 online-tracking or ask your own question.

11
Do promotional flight routes have a historical precedent?

10
Why do the engineers need to be on board during testing?
10
What are the busiest airways?
10
What is a “departure” in the context of flight testing / maneuvers?
3
How to completely track a plane, not a flight?
37
Can supersonic conditions be replicated on the ground?
3
Where can I find the planned and flown paths for certain flight routes?
3
What is the best way to retrieve (and transmit) location (GPS) of plane in real time?
0
Is public data available for routes that enter/exit a certain airspace?
4
How to find past flight routes between 1977/82 Latin America and the former Soviet Union?
1
What is the relation between altitude and vertical speed?