Why are fuel tanks in the wings filled first, and why are they used last?

It's for wing bending relief (for cantilevered wings). As the generated lift bends the wings upward, the weight of the fuel will counter that.

As the plane loses weight in-flight due to burning fuel, so does the need for wing bending relief (less weight → less lift), that's why the wing tanks are the last to be used.

For context, a Boeing 777-200ER can hold 29 tonnes of fuel in each wing, and each wing measures ~27 metres and is self-supported.

Let's say in our airliner each wing tank holds 100 units (200 total for both tanks), and the center tank holds 200 units, and you have a flight that needs 200 units of fuel.

Example for order of use (schedule):

Our flight needs 300 units, based on the above, we will fill the wing tanks, and fill half the center tank.

Related: How is fuel stored and routed on a trijet with one engine at the tail?

Having all the payload of a plane concentrated at the fuselage creates a large bending load on the wings in order to support that weight. Storing fuel in the wings allows some of that weight to be placed at the same place where it's being supported, in the wings. Distributing the weight into the wings reduces the loads where the wings meet the fuselage. 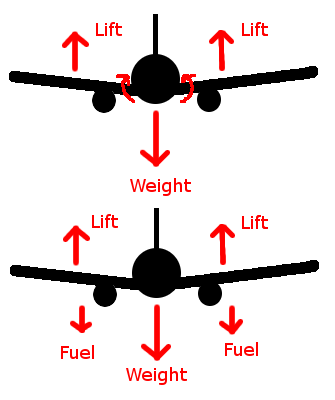 A minor point - keeping less of the flammable fuel in the body has a safety benefit.

Using up what's in the body first helps keep it further away from the crew and passengers.

In a crash you'd prefer the fuel to not ignite, but of the two locations, its better burning out by the wings than inside the main fuselage.

If you are topping off the aircraft, it won't matter if you fuel the belly or wings first. However, another consideration, which is not part of your question is weight and balance on the ground when the aircraft is empty. Some aircraft like the older DC8 has like 8 or 10 fuel tanks in various locations, some are forward of the CG and some are aft of the CG. However, the fuel tanks in the root of the wings are usually slightly forward of CG which helps to prevent tail tipping.

The simplest explanation is that the wings are designed to be the load bearing structure in the air and on the ground. So, you want the most weight to be in/on the wings.

In other words, you want to keep the weight stress on the wing structure as opposed to the fuselage because the wings are designed to carry weight.

Wing tanks are loaded first because:

Fuel is then consumed from the center tanks first to keep the most weight on the wings through the flight.

The weight from the fuel will counter the upward bending of the wings, as nothing but the wings alone must bear the load of the cabin, and all of its passengers/cargo. Using fuel from the wings last will decrease stress on wings, and the joints between the wing and cabin.

Not the answer you're looking for? Browse other questions tagged airliner fuel-tanks refueling fuel-systems or ask your own question.

53
Why are fuel tanks located in wings?
27
Why don't we see business jets with wingtip fuel tanks anymore?
13
Is center tank fuel required to start the 737-800 engines?
26
What is the lifespan of commercial airframes (in general)?
14
Why nitrogen generation system is only present in centre tank only?
14
How is fuel stored and routed on a trijet with one engine at the tail?
7
Why is engine No.2 started first, instead of No.1?
9
Why was the B-52's wet wing more susceptible to fatigue than its dry wing, and not less?
6
How does an aircraft's weight affect the V-n diagram?
1
What is the structural impact on the wing if no fuel is stored in the wings and just in the fuselage?
See more linked questions

11
What is the capacity of the vent surge tank in an A320?
54
Why do many GA aircraft not have a "Both" fuel selector?
3
How are fuel tanks tested and certified?
7
Why do aerobatic aircraft have separate tanks instead of a single acrotank?
53
Why are fuel tanks located in wings?
8
How can the fuel decrease evenly from both wing tanks when an A320 is running on APU only?
4
Where are the fuel tanks located in an Antonov An-225?