Why are bird strikes on approach or landing not as common as on takeoff?

I've heard about lots of bird strike incidents that occured during a takeoff roll or the early phase of takeoff climb but hardly heard of bird strikes on approach or landing.

This is always a dangerous thing. Only because you hear more bird strikes that occur on takeoff, it does not mean there are more at takeoff.

I found, for example, this report about bird strikes from the year 2000. It says:

That means there are more bird strikes during approach than on takeoff. I assume things haven't changed a lot since then.

This question is even answered in the Wildlife FAQ Section of the FAA:

Q: Do most bird strikes occur while in flight, at takeoff, or landing?

A: About 60% of bird strikes with civil aircraft occur during landing phases of flight (descent, approach and landing roll); 37% occur during take-off run and climb; and the remainder occur during the en-route phase. 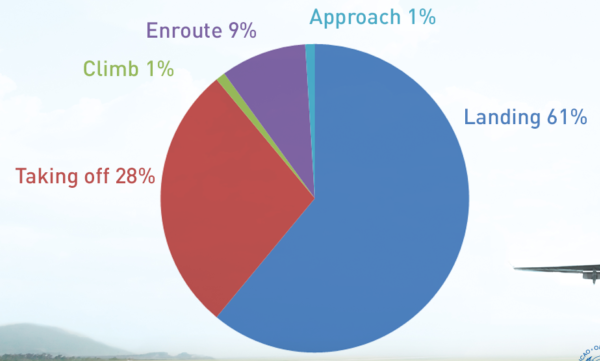 I thought a little about it and came to following possible reason: After a bird-strike on final, the pilots will continue landing. It would be unwise not to land immediately. For the passengers it will look like a normal landing. If the bird damages the engine, there is only a small change of sound, because the engines are running very low.

However, when a bird-strike occurs while taking off, there is immediate action taken by the pilots. And because the engines are at or near full thrust, the sound of a dying engine can be perceived by the passengers. Last but not least, a departing aircraft has a much higher speed than a landing one, which means more damage.

So, for newspapers, a bird-strike at take-off is more dramatic and drama sells.

A newspaper is not interested in a bird-strike on final, where everything went fine and no passenger noticed anything.

To support my theorem, I googled "bird strike" and clicked on the "News"-tab. I looked through every article that had to do something with an bird-strike incident. 5 out of 6 articles were about a bird-strike on take-off. That's over 80%.

If its true that birdstrikes are more common on landing, a possible reason for this could be noise.

Aircraft taking off at 100% power are making a lot more noise than an aircraft on final at or near idle. Birds flying through the air may not hear an idling aircraft coming from behind. Keep in mind that a bird flying through the air at 30 or 40 knots has a lot of wind noise around its head, (similar to sticking your head out the window of your car), so unless the aircraft is making a lot of noise (such as during take-off) the bird may not turn its head to see the 737 approaching from behind.

Not the answer you're looking for? Browse other questions tagged landing takeoff bird-strike or ask your own question.

31
What is the proper procedure after a bird strike in a single engine plane during takeoff?
21
Why do flaperons 'move down then up' on takeoff roll on a 787?
1
How should these translated takeoff and climb settings be interpreted?
13
In light aircraft, non-instrument flight, apply (nearly) full aft elevator before beginning the takeoff roll or at some predetermined speed?
50
Why don't jetliners maneuver to avoid a bird strike if spotted in time?
9
Can "a drone" damage the wing of "an aeroplane" to the extent it actually threatens its ability to fly?
5
Why, and how, are barometric altimeters accurate enough for approach and landing?
5
Does high density altitude affect your landing speed?