Why did the F-104 Starfighter have a T-tail?

My question is: is that really the reason why the F-104 had a T-tail? How does that help reduce inertia coupling? 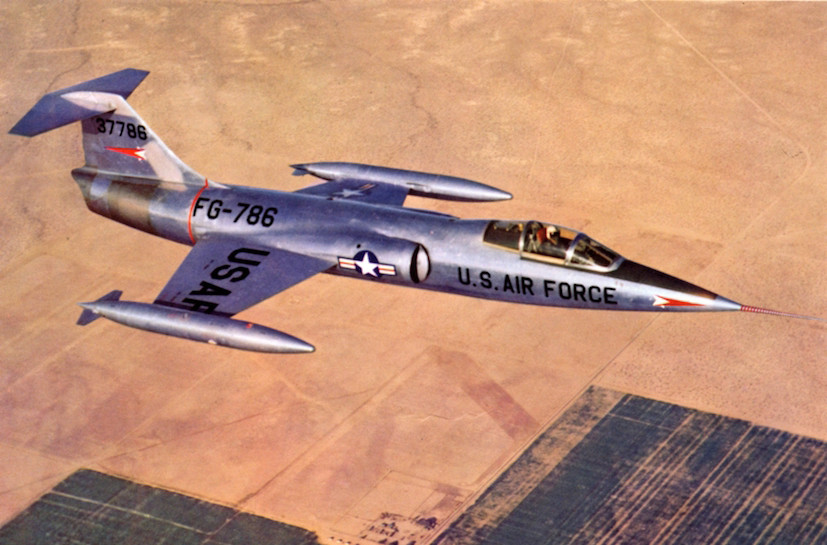 @aeroalias answer has many of the reasons for the T-tail. Had edited the question with some additional info, it was suggested to put this in an answer instead.

The initial preliminary designs had the horizontal tail in multiple locations (including in-line with the wing and cruciform), before settling on the T-tail by December 1952. The reason for selecting the T-Tail is given by Glenn L. "Snake" Reaves, Lockheed Production Flight Test Pilot in the F-104 Test Pilot notebook as

The high tail position was selected ... after extensive wind tunnel tests (which) proved that the location was necessary to obtain optimum stability and control about the pitch axis throughout the wide Mach range. The position also results in minimum transonic trim changes while accelerating to supersonic.

Another advantage was that the high tail on the swept vertical fin reduced interference drag. While the problem was inertial coupling was quite well known during 1950's, the design of the F-104 was frozen during the same period, so it is difficult to tell conclusively if that is the reason for F-104 having a T-tail.

The test pilot notebook also has some explanation about how the T-tail reduces the problem of inertial coupling:

If we now consider two facts about these rolling maneuvers, it will become clear how inertial coupling builds up:

The T-tail controls the the sideslip build-up by inducing a rolling moment. From the same document:

... the high tail position of the horizontal stabilizer raised the center of pressure. 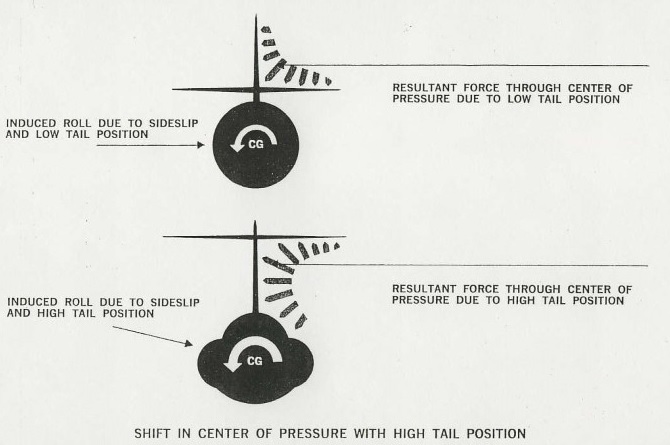 ... with any sideslip, the restoring force acting through the center of pressure does not act through the c.g of the aircraft. Therefore, a sideslip condition actuates the restoring force on the tail but at the same time, induces a roll. ... now that we have raised the tail and consequently the center of pressure and the positive dihedral effect has been increased considerably.

The Wikipedia article lacks a reference. It seems it's to keep the fin short while being effective, which reduces weight and drag. A classic use of T-tails. 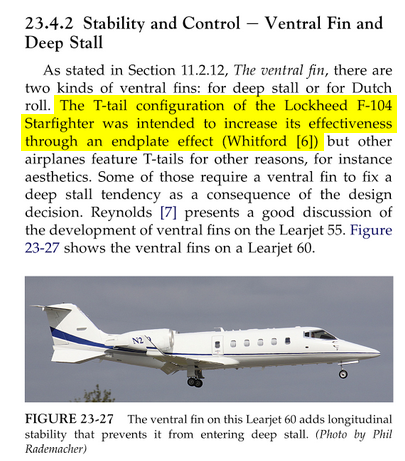 The cited Whitford I believe refers to this book.

@aeroalias answer contains a link to the F-104 test pilots notes, which explains:

According to the document, the T-tail provided better stability, control, and trim characteristics throughout the speed range. It also provided the same aerodynamic coupling effect as wing dihedral does, that's why the wings have anhedral.

Inertial coupling is not an aerodynamic phenomenon. It has occurred in one of the first satellites put into orbit, which was longer than it was wide, and over time started to wobble around the axis of rotation, a phenomenon called nutation. Airplanes with a long wing span can maintain a high roll rate without pitch and yaw being affected - the Starfighter was the first plane with short wings, and with a high roll rate came nutation, with undesirable pitch and yaw effects. And also a challenge when turning, judging from the famous phrase of a Canadian pilot: "Banking with intent to turn."

The T-tail is not really a solution to inertial coupling, only a longer wing span around the CoG is. Inertial coupling was prevented by limiting the roll rate. The T-tail did increase directional stability of the vertical tail due to the winglet effect, as did the ventral fins.

So contrary to the wikipedia statement, the T-tail was not primarily implemented to reduce inertial coupling.

31
How do conventional and T-tails differ?
26
Why does a T-tail produce a pitch-down moment in sideslip?

37
Why did the Junkers Ju-52 have corrugated external surfaces?
113
Why does it take so long to develop modern military jets?
11
Is the MTOW determined by the wheel maximum supported weight?
32
Why did the DC-3 have wing sweep?
7
Why would a stretch variant need a larger horizontal stabilizer?
2
Would the Concorde have been better off using a tailed delta wing?
9
What was the first aircraft equipped with a RAT?
7
Why was the A340 developed with four engines?
1
Why did the Wright brothers take steps to increase the amount of vertical surface area forward of the CG on some of their aircraft?