Is there no warning if landing gear is not retracted during flight?

I know that most aircraft have a warning system which makes beeping sounds if an aircraft tries to land without the gear down. After reading this news article about an Air India flight 676 flying without retracting the landing gear, I was wondering if there is a reverse mechanism which warns the pilots if the landing gear is not retracted during flight?

If its not there, why?

It's not there because it's like driving with the handbrake on.

[The flight] was climbing out of Kolkata, however achieved an unusually poor climb rate, was not able to accelerate to normal cruise speeds and leveled off at FL200 after a continuous climb for about 30 minutes (avherald.com).

And because the flight crew should have run the 'after takeoff' checklist, which includes checking that the landing gear is up and locked. 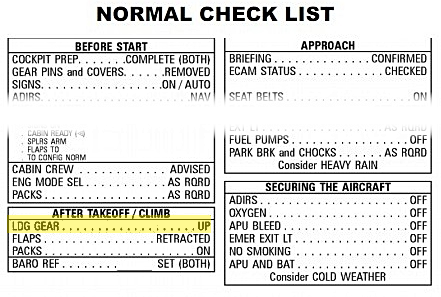 (Source) A typical Airbus A320 checklist.

Related: How much extra drag does landing gear incur?

I flew the light-attack, single-seat jet the A7-E while stationed aboard the Nimitz. The landing gear position indicator indicated both up-and-locked as well as down-and-locked. That doesn't mean it got much attention on the takeoff though.

I was a new pilot attached to the squadron when one of the senior JO's left for a cross-country. He was climbing to altitude when he called maintenance to discuss a problem he was having. "There seems to be something wrong with the engine," he exclaimed. Maintenance asked him what the signs were and he replied that it just wasn't generating enough thrust. "I can't seem to get above 220 KIAS, and my climb rate is very low." A series of questions followed: What is your fuel flow? Turbine outlet temperature? Altitude? Throttle position? Any unusual noises?

His answers seemed to suggest that everything appeared normal. Nothing was out of the ordinary. As we listened to the radio conversation a pilot off in the corner, with a big smile on his face, suggested he look at his lading gear position indicator.

"Hey maintenance, I found the problem. See you in a few days."

In either position, down-and-locked or up-and-locked there was no audible tone. There was just a visible indication. One was expected to follow their checklists and look at the indicator.

Some of the comments about that incident indicated there is an illuminated light, at least in some aircraft, indicating the gear is down, but not an audible tone.

There is a saying "There are 2 kinds of retract pilots - those who have already landed gear up and those who are putting it off until later".

To prevent this the Piper Arrow had a system which would actually lower the gear automatically if you got into a situation that it thought was landing (low speed, low power setting) but had not yet lowered the gear. Sounds great!

The main problem with this is that in the event of an engine failure, you would be in exactly this condition; but, since gear down is EXTREMELY drag producing (that being the point behind raising gear in the first place) it would severely limit how far you can glide (cuts it by about 70%). Several people had engine failures and unintentional gear extensions and were forced to make off-airport landings as a result, when odds were good they could have made an airport if the gear had stayed up until the last minute. Turning it off immediately became an additional step in the engine failure emergency checklist, the very last place you want additional tasks.

To my knowledge the Arrow was the only plane with this system on it. Piper never tried it again. Most of the Arrows I have flown have had the system removed (which is bad because some of them did and some did not so I would be extra-stressed in an emergency to lock out the system, but might not need to).

Not the answer you're looking for? Browse other questions tagged emergency fuel landing-gear or ask your own question.

9
Will the landing gear work mechanically in case of total power loss?
7
How does the squat switch work?
2
How much force can the landing gear of a Piper Arrow withstand?
22
Is there a landing gear system that extends automatically to prevent belly landing?
5
What defines a landing gear bogie?
8
Should an emergency field landing be performed with landing gear down or up?
6
Do the landing gear modules rotate?
12
What causes a Cessna 172 and its gear to shake violently after landing and braking?