I'm thinking: as the blades rotate, the tip moves faster than the hub. So to make the blades efficient, the blades are usually twisted. The angle of attack of the blades at the tip is lower than at the hub because it is moving at a higher velocity than the hub. The amount of thrust generated is higher near the tips than at the root. Engineers want the thrust to be equivalent on every part of the blade. Is that right? 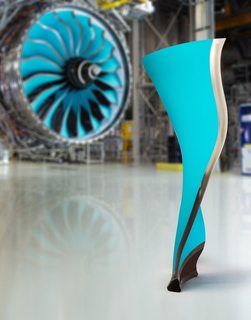 There's been patent wars regarding this invention.

What you show is not just a twist, but also a varying sweep. According to Rolls-Royce's patent from 1996, which was the subject of one of the lawsuits, a basic summary is as follows:

Forward sweep is employed near the hub 4 to counteract the rearward sweep of the outboard sections of blade 30 in order to make the design mechanically feasible.

If you look at the image in the middle, it shows how the blade angle changes, the higher the $S_n$ number, the farther from the hub. And with the two velocity vectors from rotation and airflow, it's clear the mid-sections will produce the majority of the thrust, which helps reduce the tip losses.

Another object of the invention, is "increased resistance to foreign object damage", "in particular bird strike"; with the majority of the blades's top surface not facing directly ahead, less impact energy is imparted on the blades.

I don't think it's accurate to say that the desired thrust is the same along the entire blade. For a large turbofan blade like the one in your image, the outer part is designed to act more like a propeller (efficient for the bypass air) while the inner part is designed to act more like a compressor (efficient for the core). You're not incorrect in stating that the twist does help optimize the angle of attack with the speed of the section, but that's more about not breaking the speed of sound at the tip than keeping thrust constant along the blade.

For any specific engine, though, the blades are highly optimized based on an incredible amount of complex CFD and wind-tunnel analysis for which there is no simple or intuitive summary. The design of a turbofan blade is driven by several factors, mainly

All of these go into the resultant shape, but you're unlikely to find specifics that are non-proprietary to the manufacturer and available for anyone to analyze. The twist specifically is just another parameter in the extensive, complicated optimization.

Your question is about fan blade twist, but actually the answer is valid for nearly all rotating blades. If a blade weren't twisted, the angle of attack would be very different from its root to its tip.

The angle of attack is the angle between airflow and blade chord.

For the blade to be efficient this angle must be close to the maximum lift angle, which is roughly around 15° for usual airfoils: 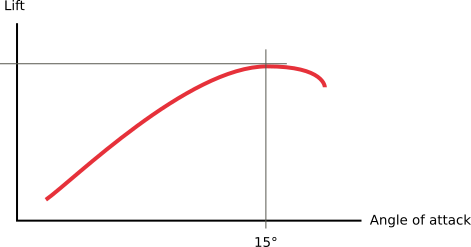 However we're talking about the direction air actually comes from, as seen by the blade. When the aircraft is moving straight and level, for the pilot air comes from ahead, but this is not true for the fan blade, due to blade rotation. 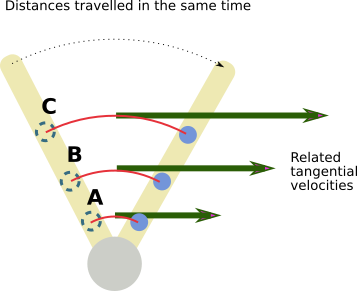 Let's imagine we have tweaked the blade angle of attack at location A. What happens at locations B and C if the blade is not twisted?

As we move closer to the blade tip, the tangential speed increases relatively to forward speed, so the sum (purple) gets more vertical. Angle of attack is now too small for locations B, and in C it is even negative, that is the blade pushes air in the wrong direction. 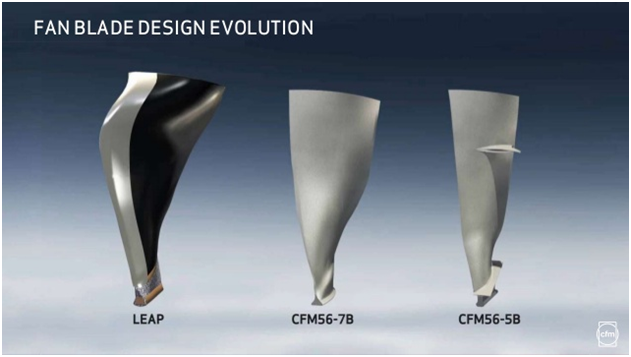 From what was discussed we are able to distinguish the actual angle of attack from the apparent angle, which is generally called pitch or incidence, that is the angle between the engine longitudinal axis and the chord.

On a twisted blade, incidence varies, and is larger at blade tip. However the angle of attack, which actually depends on rotational velocity and cannot be evaluated visually, should be more or less constant.

In turbofans, the fan acts on two separate flows: Primary flow, the smaller in mass which is used to produce gas to spin the turbine; and secondary flow, the largest which bypasses the engine core and propels the aircraft.

Accordingly, fan blades in such engines are designed in two sections. Near the hub, blades are part of the low pressure compressor, their role is to increase pressure. Elsewhere they accelerate air a bit to create thrust, like a propeller.

These two designs must deal with their own constraints and optimizations, this gives a particular shape. Modern fan blades are formed hollow sandwiches titanium/aluminum and composites, and are comparatively lighter and more complex. When rotating they are less stressed, in particular where velocity is higher, than heavier blades, and they can be wider without being subject to deformation. This allows to give them a more optimized shape, including twist, taper, dihedral, sweep, etc. The shape evolution over time is visible in the last picture of this answer.

(Hot section) turbine blades are twisted (in the chord wise direction) because they are partially utilising reactive aero mechanical design, and impulse aero mechanical design. (The blade is also twisted in the radial direction due to vortex flow. See the last paragraph of the development section here. This is also mentioned in Frank Whittle's book, Gasturbine Aerothermodynamics. Rolls Royce's book, "The Jet engine" says on page 50: "The reason for the twist is to make the gas flow from the combustion system do equal work at all positions along the length of the blade and to ensure that the flow enters the exhaust system with a uniform axial velocity.")

With fan blades, I am not so sure - I think your answer is along the right lines, (though it's better to say even pressure rise than thrust, although ultimately that pressure translates to thrust), but if that was the only factor at play, I think the blade shape would be a smooth arc from the hub to the tip, and that's not the case. Usually in a gas turbine, the outer fan case diameter is relatively straight, but the hub expands as the air flows though the fan, then into the compressor, the air travels through a bend. So, the air is moving in an axial and radial direction. This maybe an added factor that causes fan blades to be twisted. Fan and compressor blades have the difficult job of making the air flow in the direction of increasing pressure. Flow seperation will cause stall, so care needs to be taken to avoid any local flow disturbances. The air can also choke within a compressor, which is why sometimes air is bleed of the rear stages for stability control. To avoid choking in one region, the air needs to be distributed evenly. (This is more an issue in the booster or HPC than the fan however). Reducing fan noise is another requirement.

Note: Bits in () in 1st para added in subsequent edit, to include feedback in comments.

Because airflow will meet the leading edges at different velocities ( at the hub is slower and needs more AOA and at the external edge is faster and fine pitch is needed ). To benefit from the all available airflow and not get aerodynamic( for compressor) stalled air the twisting must be added to the blades. So to not have Stall of the blades is the answer.

Not the answer you're looking for? Browse other questions tagged jet-engine turbofan engine-design blade or ask your own question.

9
Why do some turbofan blade have forward swept tips?
5
What are the visual differences between Trent 892 and 900 engines?

29
Are the fastest moving pieces of a jet engine supersonic?
32
Why are the fan blades mounted loosely?
35
How does a fan differ from a propeller?
10
What is the function of the protruding outlet on the Trent XWB?
4
Do fan blades use bell shaped lift distribution curves?
4
How is a stator like a diverging passage?
6
Why don't turbofan engines have shrouds affixed to the fan blades?
1
Why are high-bypass turbofans faster than turboprops?
4
Why are jet engine fan blades painted?