Why are there no 4-winged airplanes?

With larger wings comes more drag. So why don't large planes have 4 smaller wings instead of 2 very long ones?

You need a certain wing area to support the weight of the aircraft. Now the question is: over how many wings will we distribute this wing area? For over 80 years, the answer has been: one wing (the two wing halves make up one wing).

The classical biplane is a thing of the past, however there have been incredibly clever aircraft builders who have looked at the long coupled canard configuration. This one really makes a lot of sense: 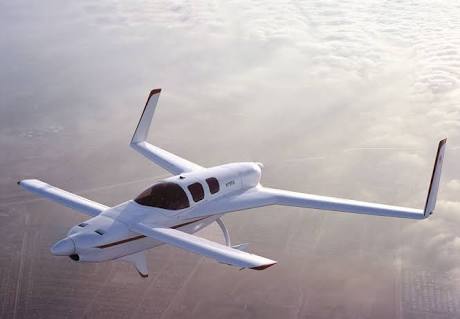 So to answer your question: there are aircraft with two wings. It's just that people don't buy them, and go for boring old Cessna's instead.

Biplanes are a thing and have been since the earliest days of flight.

However, they fell out of favour because they actually have more drag than a corresponding monoplane. Not only do you need essentially the same amount of wing but there's also the extra supporting structure.

Alternatively, if you're thinking of two wings one behind the other then the turbulence from the front wing will dramatically decrease the lift of the second.

Biplanes and other multi-wing configurations suffer from the airflow coupling of the wings. Specifically, lift is due to deflection of the air downwards by the wing. Another nearby wing now is dealing with deflected air, reducing its possible lift. As mentioned earlier, the real lift function depends on span per unit lift, regardless of how many wing (or horizontal tail) surfaces are involved. A Cessna wouldn't fly with 36 one-foot wings...

I think there are could be a couple of reasons why one wing is the norm. Firstly, from an induced drag perspective a longer wing, if structurally possible, will provide less drag than a shorter, fatter one. The longer the aspect ratio (the ratio of wingspan to the cord (width) of the wing) the less effect the wingtip vortices have.

Secondly, as mentioned in another answer, a wing behind another wing sees disrupted flow. How this flow is disrupted could be hard to predict when designing the aircraft

"With larger wings comes more drag" is not true - the opposite in fact (doubly so since you mean wing length, not area). Drag is a function based on many things, one being the coefficient of Drag (Cd) which is itself made of up many parts (friction, pressure, and parasitic losses) and which is greatly influenced by the shape of the airfoil sections that make up the wing, along with how the designer works to minimise tip loss vortices.

The more "ends" you have, the worse those are, so aeroplanes only have one wing that lifts (the back does not provide lift, so has negligible tip loss vortices).

25
Why are there no longer any biplanes?

15
Why are propeller airplanes still made?
20
Why are there no blended-wing passenger airplanes in operation?
15
Why do most commercial airplanes use hydraulics instead of electric/servo motors?
8
Is there anything wrong with this more symmetric aircraft design, and why isn't it used?
2
Why are smaller wings in the front with these VTOL aircraft?
4
Why are propeller driven aircraft commonly built with a higher wing aspect ratio and a straighter wing angle?
10
Why don't smaller powered airplanes have better lift-to-drag ratios?
20
Double deck vs wide body airliner, why would anyone build a double deck one?