Where can I find the full report of this controlled F-4 fighter jet impact?

They used an F-4 Phantom jet as a test article in a crash into a concrete wall at 500 mph. It wasn't actually a crash because the plane was not flying.

I would like to know the disposition of the components of the aircraft if possible. Since this was actually a materials science test and not an aviation test, I am unsure if that even exists. Where can I find the complete report of this controlled impact?

The test was carried out by the Sandia National Laboratories under terms of a contract with the Muto Institute of Structural Mechanics, Inc., of Tokyo. The purpose of the test:

... was to determine the impact force, versus time, due to the impact, of a complete F-4 Phantom — including both engines — onto a massive, essentially rigid reinforced concrete target (3.66 meters thick).

The reports on the tests can be found in these places:

Interestingly, the aircraft used in the tests were flyable. The report notes:

A flyable F4D aircraft was acquired by Sandia. The aircraft was modified slightly in order to support the aircraft at four locations with a special carriage structure. ... the aircraft weighed 12.7 tonnes (with some avionics removed). The impact weight was 19 tonnes, which included ... 4.8 tonnes of water that was added to simulate the fuel weight...

The target consisted of a block of reinforced concrete 7m square and 3.66m thick ... with a combined weight of 469 tonnes.

The aircraft was crashed with the engines and only a few parts removed:

A fully functional F4 was used in the impact test.Only the gears and flaps at the main wings were partly removed and replaced by a carriage structure and sleds.

This can also been in the following mass distribution diagram for the aircraft used in the test. 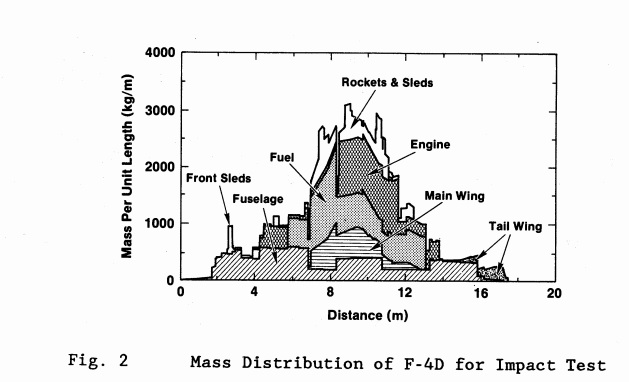 Finally, the test was for measuring the impact forces, not the strength of the wall, as stressed by Sandia:

At Sandia, a spokesman, John German, said the point of the test was to move the wall, as a way to measure the impact forces. ... as a preliminary step in building a computer model of such impacts, ...

Mr. German said: "That test was designed to measure the impact force of a fighter jet. But the wall was not being tested. No structure was being tested."

Not the answer you're looking for? Browse other questions tagged aviation-history f-4 or ask your own question.