How long can an average aerobatic plane sustain 0g?

How long can an average aerobatic plane sustain 0g safely?

An aerobatic aircraft (as well as any aircraft) can sustain 0g until the pilot pulls up, the aircraft hits the ground, or reaches terminal velocity.

In order to sustain 0g the aircraft must be accelerating towards earth at $9.8 m/s^2$ (meters per second squared). That means there isn't much time before the aircraft reaches its maximum speed. Once the aircraft can no longer accelerate at the same rate of gravity, then the occupants will no longer feel 0g. In sky diving (and physics) this is called terminal velocity, which is the velocity at which air friction prevents the object from falling any faster.

Acceleration is change in speed, so naturally you don't have to be going straight down to be accelerating towards the earth (we're talking about vertical speed). If you are going up at 200kts and begin to decelerate at exactly $9.8m/s^2$ you will "feel" like you are in 0g (free fall) even though you are continuing to go up for a few seconds. But this will only last for a few seconds before the aircraft momentarily reaches its apex and you and the aircraft begin moving towards the earth. If the aircraft can match exactly the acceleration of gravity, then you will continue to feel weightless (i.e. 0g).

But you can't continue to accelerate indefinitely towards earth without either reaching terminal velocity or exceeding the aircraft's maximum speed. So the limit of the sustained 0g flight is the pilot pulling back on the yoke and climbing to prevent the destruction of the aircraft and death of all on board.

However, even if the wings broke off of the airplane, and you were plummeting towards the ground in the fuselage of the aircraft, you would only remain weightless so long as the fuselage continued to accelerate towards the earth at $9.8m/s^2$. At some point, if you had enough altitude, the drag (wind friction) on the fuselage would prevent it from continually accelerating towards earth and you would reach an equilibrium speed where the force of gravity equals the force of drag and you would no longer feel 0gs.

The longest possible 0g experience is on a parabolic Flight http://www.asc-csa.gc.ca/eng/sciences/parabolic.asp.

As Devil07s great answer explains the time a plane can fly "at 0g" depends on its vertical speed at start of the 0g time.

Lets take a typical air acrobatic plane. Its maximum speed is 220knots ~ 400km/h. The plane looses some speed before entering the flight pattern (until it reaches 45° pitch) and gains some more speed before reaching 0° pitch after leaving the pattern, but lets ignore that for the ease of the calculation.

Choosing a higher pitch will create a higher entry speed by calculation but the entry speed will also be reduced by the longer "rotation time" and structural limits of the plane.

Now it follows the parabolic Flight pattern until it reaches the culmination point (0km/h vertical speed):

The plane needs exactly the same time to reach the "exit speed" of 400km/h. Therefor the total time an Extra EA-300 can fly in 0g is approximately:

That depends on a whole heap of things. Zero g is experienced during a ballistic trajectory. Wikipedia lists as time spent during ballistic flight: $$ t = \frac {2 \cdot V \cdot sin\theta}{g} \tag{1}$$ with V = starting velocity in [m/s] and $\theta$ the starting angle. The equation is valid for vacuum, which would be equal to our situation where thrust continuously equals aerodynamic drag. 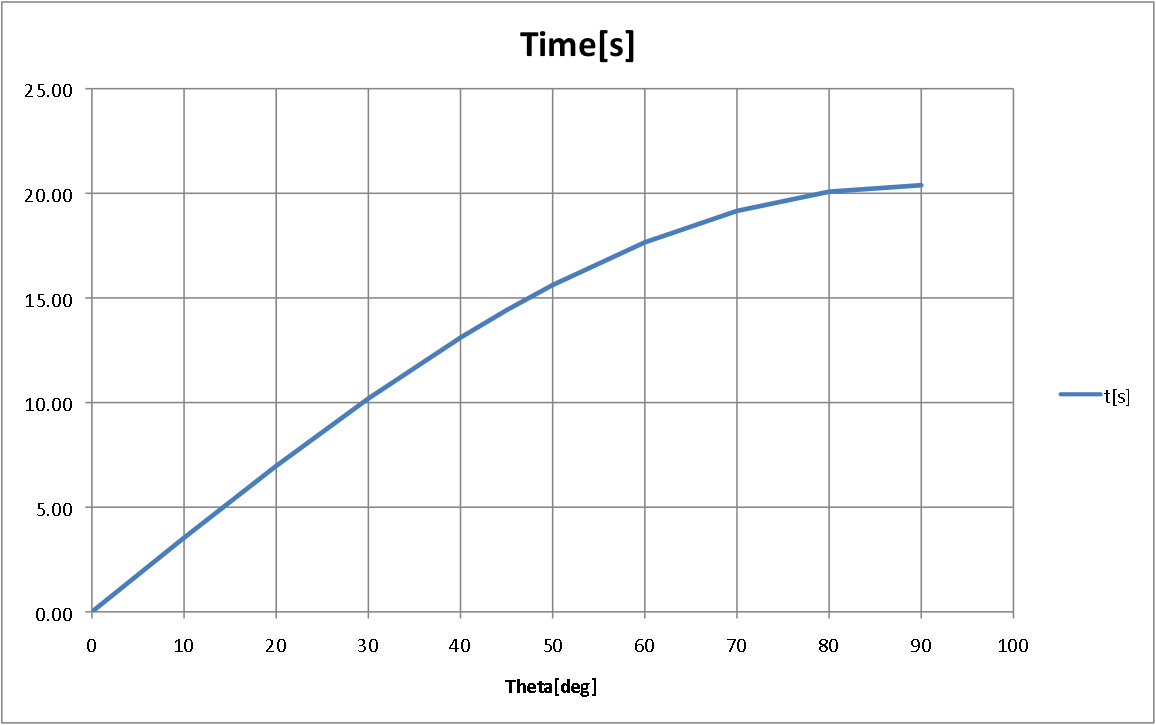 For any velocity, if we want to maximise time spent we need to start at 90 deg, as this plot shows: time in seconds as function of starting angle at starting speed of 100 m/s. But that creates a bit of a practical problem at the apogee, the aircraft will fall back tail first, do a hammerhead, and we're not in zero g anymore. So let's take an angle fairly close to the maximum where the pilot could maintain parabolic flight using his incredible skill: 60 degrees. 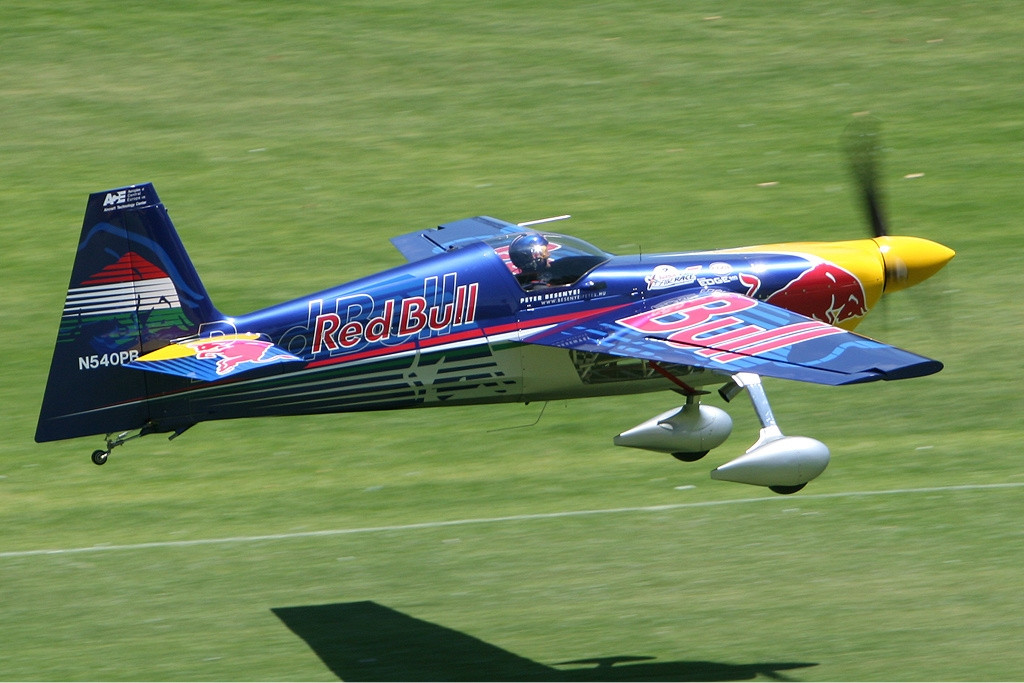 We're in an aerobatic aircraft, which is a very wide range actually: jet fighters are fully aerobatic as well. If we take a typical Red Bull Air Racer as one delimiter and an F16 as the other one, we have a speed range of between 100 and 600 m/s. For a ballistic flight path starting at 60 degrees, we get the following flight time as a function of starting speed. Between roughly 18 and 106 seconds. 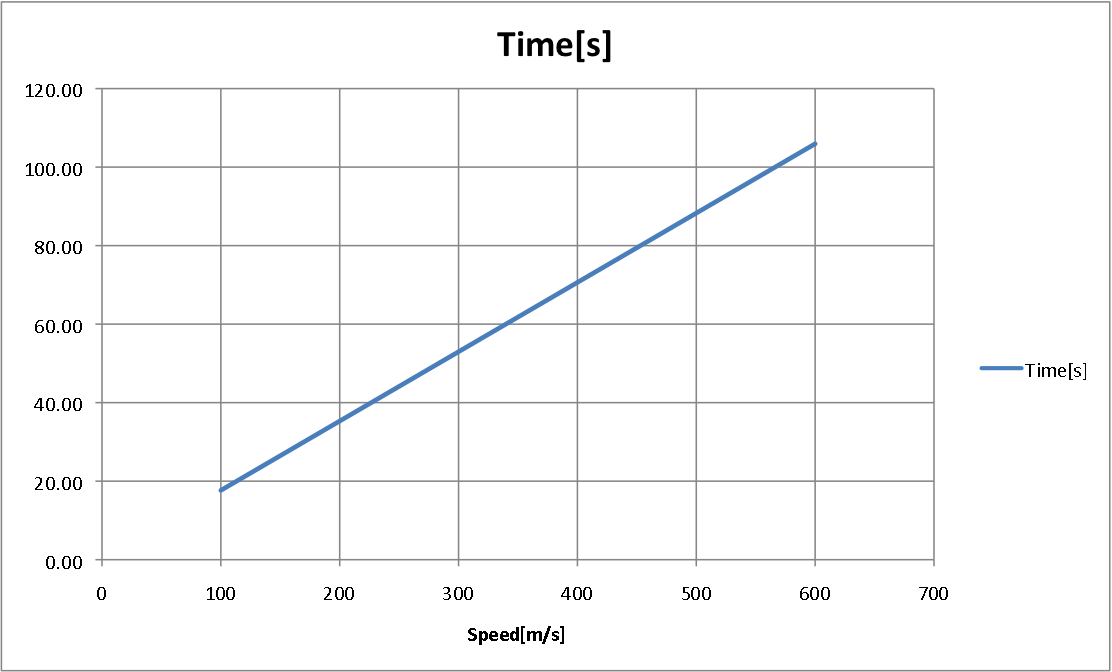 Not the answer you're looking for? Browse other questions tagged aerobatics or ask your own question.

15
What makes the ailerons on an aerobatic airplane different than the ailerons on a non-aerobatic airplane?
3
Aerobatics in "firm" IMC -- how would one do it?
4
How do GA glass cockpit attitude indicators handle aerobatics?
33
Are there full scale helicopters capable of sustaining inverted flight?
12
How do fuel trim and air bubbles prevention work in inverted flight?
1
What is the difference between a tail slide and a whip stall?
1
How do aerobatic aircraft land?
10
Which aerobatic maneuvers are most likely to make people airsick?