What is the purpose of aileron droop used in some commercial airliners?

As we know ailerons aid the aircraft to make roll movements and provide lateral stability.

But, what is the intent behind drooping them in some flight conditions, especially when deploying flaps?

The purpose of aileron droop is to use the ailerons as wing flaps. Wing flaps increase the lift generated by the wings at low speed. They occupy a good part of the trailing edge of the wing, except for the outer part, where the ailerons are. By deflecting both the ailerons downwards, they change the wing camber and act like simple plain flaps. They can still act as ailerons, by normal differential deflection. 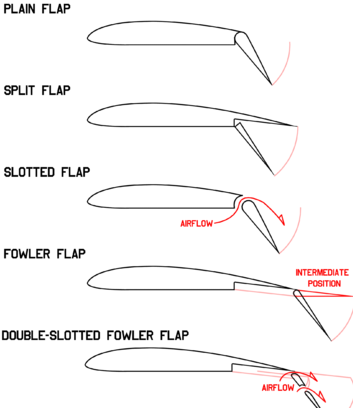 Many different types of aircraft (certain models of Airbus/Boeing, etc) are designed so that when flaps are extended (for increased lift at slower speeds - e.g., takeoff, landing) part (or all) of the aileron assembly "droops" to add to the benefit and efficacy of the flaps.

0
What does aileron droop help to do?
10
Do airliners stall first at the wing tip?
2
How much could you increase lift using ailerons alone?

24
Do Airbus pilots have to practice flying in alternate law?
16
What is the purpose of this aileron trailing edge strip?
5
How is the flight of a tricopter controlled?
6
Why is the 737’s aileron/spoiler authority reduced at low flap settings?
13
Why do aircraft have a crossover airspeed, and why does it increase at higher vertical load factors?
7
Why does the A320’s maximum allowable aileron deflection decrease, rather than increase, when the flaps are extended?
1
Why are the flaperons on the 787 located so far in-board?
5
Why is the 707’s yaw-damper-out lateral controllability marginal to nonexistent with flaps and spoilers extended?
3
What is the term for an aileron that’s also used as a ground spoiler?
5
How are the 737’s elevator and aileron cables attached to their control tabs without impeding the control surfaces’ motion under hydraulic power?