Why weren't the Airbus A330 engines designed with a system to stop their fans?

Why wasn't the Airbus A330 designed to stop its fans (with some kind of 'handbrake')?

To clarify, I am specifically talking about the aircraft that flew Air Asia flight D7237.

During the flight the aircraft suffered from a fan blade separation event and the the result was that the engine became unbalanced.

It's my understanding that the engine was immediately shut down, and that the cause of the vibrations was the fanblades freely turning as the plane moved very fast through the air (similar to blowing very hard into a turned off household fan)

But to me, it seems the whole situation could have been avoided if there was simply some kind of "brake" or 'locking' feature that prevented the fanblades from turning freely in the wind.

I feel as though there wouldn't exist another scenario where a plane could possibly experience more severe, prolonged vibrations than a windmilling event, and the windmilling event itself could be prevented if there was simply a way to lock the fanblades from moving freely.

The reason I say A330s in particular is because I am not aware of the features of every other jetliner, although I am aware some propeller engines can feather their blade parallel to the direction of airflow to prevent this.

Complexity and weight, what airlines hate most.

Has it been done before? Yup. A variant of the Convair B-36 Peacemaker was able to stop the windmilling when the jet engines were not needed (that variant had 6 piston engines and 4 jet engines). 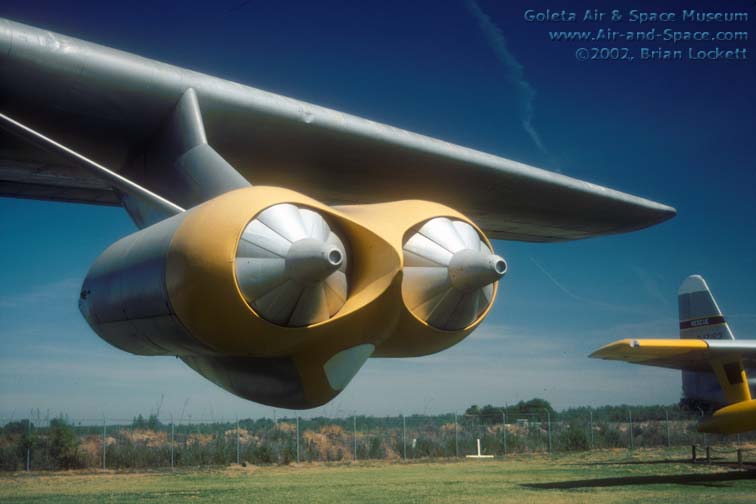 The metal petals filling the inlet prevented the jets from turning in the wind as the B-36 cruised for long periods of time with them turned off. The petals retracted to allow the jet engines to be ignited for extra thrust during take-off and high speed dashes. A strut braces the nacelle against swinging from side-to-side.

Scaling this up for the big diameter engines for that very rare engine failure is not cost effective. Instead planes can survive, and are extensively tested for, vibration and flutter.

How rare is very rare?

By the 1970s, advancing technology had set the stage for two-engine, turbine-powered airplanes to safely exceed the 60-min operating restriction [away from the nearest airport]. The result was ETOPS, which began in 1985 with 120-min diversion authority and the requirement for an average engine in-flight shutdown (IFSD) rate of just 0.05 per 1,000 engine-hours. With 180-min ETOPS authority, which followed in 1988, an even more stringent reliability target of just 0.02 IFSDs per 1,000 engine-hours was specified (Boeing, 2003).

Based on general engineering principles, there are multiple reasons why such a locking device could be unhelpful at best, and dangerous at worst:

Engine failures of any kind are rare, and, as was the case with this incident, often quite survivable. It's not worth the design cost, material cost, weight cost, maintenance cost, or training cost to have a turbine locking device.

In this case, the only thing that a brake would have accomplished is reduction in vibration. With one out of two of the engines down, the pilots would still have brought the airplane in for an early landing, and not continued on to their planned destination.

While this flight was not under US jurisdiction, the Rolls Royce Trent 700 engines used on the aircraft still have to comply with FAA regulations, if for no other reason than that A330 aircraft are flown in the United States. In particular, 14 CFR Part 33 is titled "Airworthiness Standards: Aircraft Engines", and says the following in §33.74 Continued rotation:

If any of the engine main rotating systems continue to rotate after the engine is shutdown for any reason while in flight, and if means to prevent that continued rotation are not provided, then any continued rotation during the maximum period of flight, and in the flight conditions expected to occur with that engine inoperative, may not result in any condition described in §33.75(g)(2)(i) through (vi) of this part.

(i) Non-containment of high-energy debris;

(ii) Concentration of toxic products in the engine bleed air intended for the cabin sufficient to incapacitate crew or passengers;

(iii) Significant thrust in the opposite direction to that commanded by the pilot;

(vi) Release of the propeller by the engine, if applicable;

Since I can not find any documentation to show that the Trent 700 has a rotor locking device, it must be designed to meet these regulations. Vibration is not listed as one of the hazardous conditions. It is true that vibration can be hazardous, but that's more for a running engine, and vibration monitoring systems exist to shut a malfunctioning engine down.

Other regulatory bodies no doubt have similar requirements. I picked the FAA since it is the one I am most familiar with.

Yes propellers can feather, a feature which is required for delivering thrust over a wide range of airspeeds. Fixed blade propellers had a problem with either delivering good take-off thrust, or limiting the maximum speed of the aircraft. Variable pitch propellers were invented before WW2 and widely implemented because of the limitations of fixed blade props.

Turbofans have a fan disk imside a shroud, which decelerates the air before it hits the fan blades. This setup can be optimised for cruise comditions, and still delivers good takeoff thrust. The jet engine core delivers part of the take-off thrust directly. The fan is fixed pitch because it can be - a variable pitch mechanism, or a brake for that matter, adds cost and complexity. Most present day airliners have these engines, including the A330.

However, the larger the fan in a bypass turbofan, the more efficient it is, and a large fixed pitch fan starts to have the same issues as a fixed pitch propeller. So now large bypass variable pitch turbofans are being developed, for instance the Rolls Royce Ultrafan. 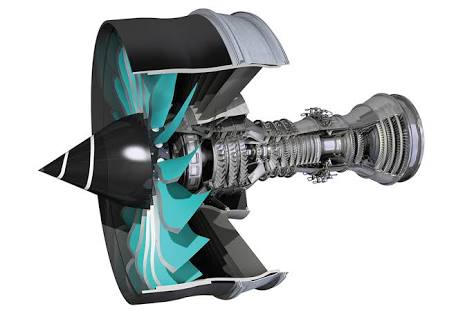 The variable pitch fan is actually not a new idea, Turbomeca developed the Astafan in the 1960s.

Windwilling of any fan, variable pitch or not, is not bad per se:

If it can be demonstrated that a windmilling engine with a broken fan blade only causes mild discomfort and no further catastrophies, and that the incidence is very rare, then there is no actual problem to solve.

Not the answer you're looking for? Browse other questions tagged aircraft-design safety jet-engine engine-failure airbus-a330 or ask your own question.

40
Why were the speed records set by seaplanes in the early thirties?
17
Does windmill restart often work for airliner engines?
7
What is the purpose of flutter testing?

53
Can the Airbus A380 safely fly with two engines out on the same wing?
18
Why is Airbus proceeding with both the A330neo and A350 XWB?
16
Why is the horizontal stabilizer root interface designed this way?
4
Why does Airbus continue with the A330-800neo despite only having 6 orders?
5
What was the first aircraft designed with a plug-system fuselage, and why?
38
Why can't an Airbus A330 dump fuel in an emergency?
8
Why does the A330 sit nose-down on the ground?
13
Are jet engines designed in a way to make an explosion result in the least damage possible?
2
What is the difference between an Airbus A330-200 and an A330-243?