What precautions are taken to avoid bird strikes?

According to this Wikipedia page on bird strike,

Note: This question does not concern the damages the airline suffers from bird strikes.

Update In Addition To Other Answers

Why jet engines are NEVER protected in the front?!

Humans are more important than animals by "most" societal standards. Therefore, bird safety is secondary to human safety (pilots and passengers). However, there are certain areas (in US) that are designated as protected areas for certain types of birds, such as in California where I have seen protected areas for the California Condor which requires pilots to fly at a certain altitude above that area. On VFR Sectional Charts the special conservation areas are depicted as indicated here: 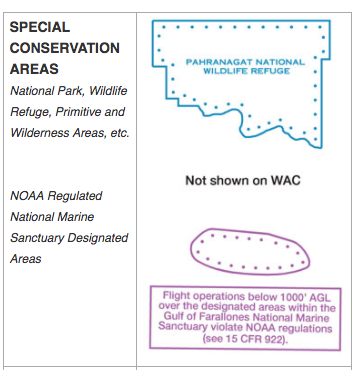 These conservation area restrictions are mostly to avoid disturbing the birds, but I assume it also reduces the risk of a bird strike by requiring the aircraft to fly higher over these areas.

One of the most important precautions is for pilots to remain vigilant and see and avoid, but that is not always possible when a flock of thousands of birds takes off near an airport when airplanes are landing and taking off.

Some airports use various methods (see links provided) to scare flocks of birds away such as using hawks, noise, and other methods. 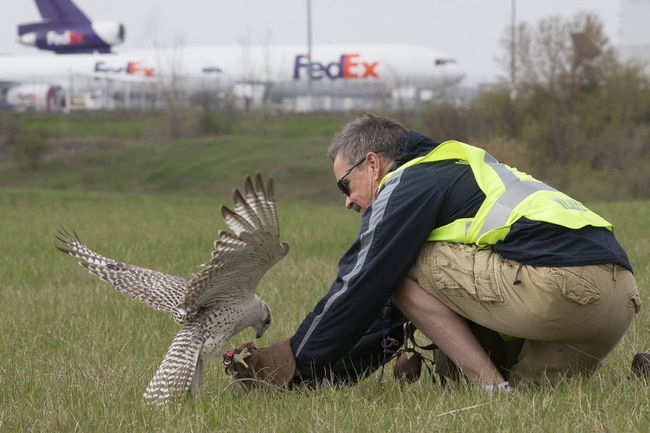 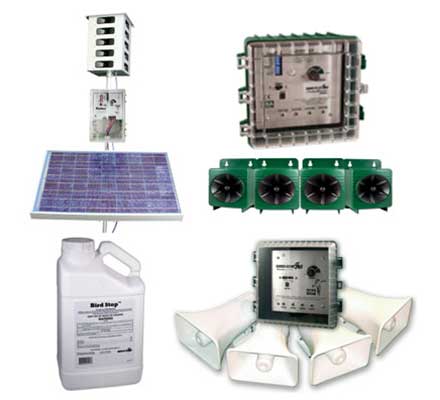 I don't know of any aircraft that are designed for the safety of birds. I believe this is a very low priority in aircraft design.

Try checking the Audubon Society website, they have a lot of information on risk to birds and statistics on such risks.

To prevent bird strikes at airports, several precautions will be taken.

Making birds not feel comfortable in the airport area

This will be achieved by doing following things:

In some cases, fireworks are used to evict birds from the airport area. But this happens very rarely, because the birds can get used to it.

At Frankfurt airport, they have even brought ten foxes to live in the airport. They hope they eat most of the mice, so birds will find even less mice to eat.

Another system in Frankfurt detects big swarms of migratory birds flying over the Main River. Because the Main River crosses the approach on one runway, they always have to know if birds are flying over the river. The system detects swarms and calculates estimated arrival at the runway track. ATC will be automatically warned.

The pilot is also not responsible when innocent animals get killed. It is impossible to avoid a bird. It is usually not seen before impact as well. I talked with a drone pilot from the Austrian army once. He said the crew of an airplane needs around 10-13 seconds to detect an object, to be able to take action. A bird strike can be predicted maybe 1 second before impact. A pilot can do absolutely nothing.

It looks like you like birds very much, me too, but in aviation, human safety is always the first priority.

There are also no aircraft that are designed for bird safety. I can't even imagine how something like that could work. Sorry to say it: aviation has so many other more important things to consider. Saving birds' lives is not important in this industry.

A pilot can face stiff fines or community service, though these penalties can be difficult to enforce, as the pilots and FAA rarely honor the results of the proceedings. 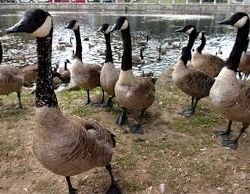 Jurors leave the "Massacre on the Hudson" trial after declaring a hung jury.

For instance in the famous "Massacre on the Hudson" trial, matters of poor airgooseship dominated the trial: Whether the inexperienced skein leader was in fact squawking, and whether he was listening to the advice of geese more experienced operating in the New York TRACON. Also, the gaggle had failed to check NOTAGs for the region, though no NOTAGs of concern had been issued.

Ultimately in a second trial, the jury declined to find criminal wrongdoing, and issued a civil sanction that geese should poop on USAir aircraft on the ground when practicable. This seems to have been effective, as such aircraft largely disappeared in 2016.

All in all compared to birds striking wind turbines, highway vehicles, etc., the amount of strikes against aircraft are relatively low.

Gives some examples for our local airport. But essentially:

Don't build airports in habitats that are unique and house endangered birds. Build theme where the birds can go elsewhere.

To Protect the people

All help keep the birds away.

To answer your question, “What precautions are taken to avoid bird strikes?” Pilots try to avoid birds and areas with high amounts of bird activity as much as possible. We don’t want to strike birds. They damage aircraft and risk human lives. Aviation wether reports, notices to airmen, airfield surface observation radio reports, chart supplements, and other information dissemination resources will note when bird activity is likely at airfields. When a pilot unintentionally hits a bird, there are no civil or criminal penalties in the US as long as the pilot was following acceptable airmanship practices. No aircraft mass produced at this time are designed with the safety of birds in mind. They are designed with the safety of humans in mind. Many organizations like the NTSB will track aviation incidents like animal encounters.

While I can appreciate your opinion and concern for this subject, and applaud your trying to start a dialogue to raise awareness of the issue, it strikes me as misplaced.

I am a pilot who lives next to a nature preserve. I can see first hand the circle of life happen everyday outside of my window. I see a similar circle of life happen at my local Class D airport of similar size. Airplanes contribute a disproportionately small impact on the total number of avian deaths. Nature kills far more birds in the nearby nature preserve than the random aircraft birdstrike.

My local Class D airport is a rather busy airport for its Class and size. Yet, we only see one or two bird strikes a month during some seasons and one a week during other, high bird activity, seasons. Compare this to the multiple birds per day being killed in the local nature preserve of similar size. These deaths are caused by domestic cats, feral cats, bobcats, foxes, lucky coyotes, snakes, snapping turtles, hawks, owls, and other predatory birds and animals. There is even a type of bird who destroys the eggs of other birds. Then, they lays their own eggs in other birds nests for the nest owners to raise. Considering the much larger number of bird deaths being caused by other animals, is there no concern for their death on your part? Especially those killed by domestic cats. These little murderers can kill several birds a day for sport and not for food or survival.

I can not put an exact number on how many birds are killed by other animals. But, a quick internet search will bring up how many birds are killed by man through food production and hunting alone. These numbers are reaching 100 billion birds a year. This makes the 65 thousand in a 3 year period killed in impacts with aircraft pale in comparison. This does not even take into account the birds killed due to the destruction of their habitats by encroaching human settlement.

You are trying to solve a very, very small part of a much larger problem. Your question might as well be what precautions are being taken to avoid innocent birds from being eaten by humans and other animals.

How Airports keep birds away?
Most airports combine a lot of methods to keep birds away, such as Standing Lasers, Pyrotechnics, Propane Cannons, Visual Effects, Natural Predators (i.e. Falconry), Traps and even adjusting the height of the grass at the airfield.

How does pyrotechnics work at airports to keep birds away?
The key of using pyrotechnics is combining sounds and visual effects to create a stimulus that attracts birds primary instincts. This can be done with a variety of pyrotechnics of varying range, colours, and blasts that can make birds fell that the place is not safe to stay. However, the correct training of bird controllers is also essential. A true specialist knows there is not a “silver bullet” in airport bird control. A complete toolbox and well-trained professionals are needed for a successful Wildlife Control Program.

What is a birdstrike?
It is a collision between a bird and an aircraft which is in flight or on a takeoff or landing roll. The term is often expanded to cover other wildlife strikes.

13
How are thermals found?
6
How many bird strikes are there per year? Any world-wide statistics?

8
Can bird strikes be dealt with by throttling down engines to idle?
18
Are composite materials, which are being widely used in newer aircraft, better at handling bird strikes?
11
What can happen if a bird strikes the engine during landing?
46
Why are bird strikes on approach or landing not as common as on takeoff?
14
What is "Bird Strike Speed"?
50
Why don't jetliners maneuver to avoid a bird strike if spotted in time?
3
Are there any preventive measures against bird strikes while in flight?
1
What maintenance actions are required after a bird strike?
15
Are gliders susceptible to bird strikes?