Are you required to have constant view of the runway when circling?

When you're circling, it has been said that you are required to keep view of the runway at all times below the MDA. However, sometimes this can be impossible due to issues with visibility, such as being banked to turn around for final, or because a flock of birds are circling between the airport and your aircraft. Are you required to execute the missed approach if this occurs or not?

A "circle-to-land" maneuver is basically a low-altitude traffic pattern - albeit one that you arrived at by being guided in on some instrument approach. The magic that makes this low (and possibly abbreviated) pattern possible is that the runway ends at airports with circling approaches have protected (obstacle free) airspace around them, which looks something like this: 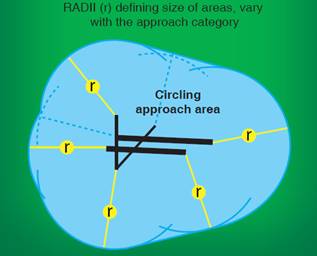 (A more detailed explanation of the size of the circling approach area can be found on this question.)

Since it's basically a traffic pattern my understanding is you treat it as such, and that as long as you stay in visual contact with the airport and within the protected airspace (by visually judging your distance from the field, and knowing your altitude) you're unlikely to hit anything, and you can do all your usual pattern maneuvering as long as you can ***visually* be sure you're within the pretty blue part of the image above (your GPS cant help you here).

To see what this means for an example approach with some turns, consider my liberally-stolen and slightly-marked-up diagram below.

If you lose contact with your intended runway end for a few seconds because of the turn/bank required at point "A" that's OK: as long as you can still maintain visual contact with the airport/runway environment when you roll out (say by looking out the back window), and as long as you can remain clear of clouds, and can maintain visual clearance from any potential obstacles you may continue the approach.

If you're flying out and on the leg from "A" to "B" and all of a sudden you look back out the window and the airport is gone in the haze and clouds, you need to go missed: You've lost the airport/runway environment, and can no longer judge your distance to stay in the "safe" airspace.

Similarly if you're in a high-wing aircraft and your turns at "B" and "C" briefly obscure the airport while you're turning you can still continue the approach - if you've any doubt where the airport is just pick up the wing like you would in a VFR pattern (and if the airport isn't there like it's supposed to be go missed!)

Regarding your bird scenario, that's an interesting one that I don't think is covered in any diagrams, but if a flock of birds causes you to maneuver in such a way that you lose contact with the airport (and you can't just pick up a wing and have it be right where you expected it to be) you're obviously going to have to abandon the approach and go missed. It's the equivalent of the airport disappearing in the haze on that A-to-B leg.

Honestly though, if a flock of birds shows up and hangs out in a way that requires you to start maneuvering around them while you're trying to shoot a circling approach in real IFR you may want to just go missed anyway (given the odds this probably won't cost you too many approaches).

In a real world situation with poor visibility, possibly precipitation, and likely a cloud ceiling really close to your altitude, do you really want to try to be maneuvering down low to avoid some stupid bird that couldn't even be bothered to call the tower?

Wouldn't you feel much better pointing the aircraft in a generally "upward" direction and following the nice friendly needle again for a little while?

I'm just starting my IFR training, but I think I'd feel better with that option :-)

I added the emphasis about the MDA, because 91.175(c) says that below the MDA you're required to have the runway environment in sight.

This FAA paper on approaches to MDA/DH has more information and also states that the airport must be in sight:

The AIM 5-4-21 explains how to get established on the missed approach:

Not the answer you're looking for? Browse other questions tagged faa-regulations safety approach circling-approach or ask your own question.

9
Why is the VFR traffic pattern area at some airports different from its IFR circling approach area?
8
When/where must a flight go missed on the JFK VOR/GPS 13 L/R approach?
11
When conducting a circling approach, how close do you have to stay to the airport (especially with the new FAA requirements)?
7
Do I need to descend towards the Minimum Descent Altitude if I have the airport in sight?

14
When flying a circling approach, is it permitted to begin the visual circling segment prior to the final approach fix?
7
Do I need to descend towards the Minimum Descent Altitude if I have the airport in sight?
10
Where is a missed approach point for circling while flying ILS?
13
Why is a procedure turn required if you are more or less on the final approach course?
7
What are the guidelines to execute a missed approach during circling?
12
What counts as "runway in sight" when flying an IFR approach to minimums?
9
When should I start turning in this circling approach?
5
Does a circling approach require "one continuous descent to land"?