What are the most significant risks to life for the airline passenger?

Suppose that I start taking long-distance airline flights, and that after each flight I immediately jump on to another aircraft that takes off for another faraway destination - and continue doing this, indefinitely.

In other words, I'm going to live the rest of my life travelling on airliners.

What's going to kill me first:

If the answer is old age, then let's suppose for the sake of the question that I'm also going to live indefinitely, until one of the other factors does me in.

I'm only interested in risks that are specific to flying. I suspect that breaking my neck falling down the steps or choking to death on an in-flight peanut might be higher, but they don't count, because I use stairs and eat peanuts regularly anyway.

I guess exposure to infectious diseases (and other risks associated with the airline cabin environment) should count, since air travel does increase those significantly.

The health risks of an airline food diet are excluded though, especially if I decide to fly economy class. So is dying of despair.

However, the risk of severe food poisoning should be included.

Finally, I'm only flying on scheduled flights on reputable airlines.

As you can probably gather, the device of the hypothetical permanent travel is simply a way of framing the risks for the sake of comparison. I'm not really interested in what it might be like to fly forever, but in the quantum of risks in airline travel.

On the other hand there presumably come a point where the frequency of travel means that some risks become disproportionately more significant (e.g. eating 70 airline meals a year might be simply unpleasant, but eating 700 would be to suffer from a genuinely unhealthy diet).

However I can't think of any risks of that kind that would start to increase at a rate greater than frequency of flying, within any normal flying frequencies.

I assume that flying is going to continue to become ever-safer, which could mean that the risk of an incident or accident will fall over time while (say) health risks don't. For the sake of a fair comparison, let's say that even into the far future the risks will remain as they are today.

Risks of dying of air travel are tiny. We can find data on direct risks of air travel, and there is an app for calculating how many years of continuous flying would lead to known aviation related chance of dying. Tiny. 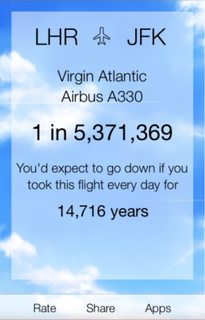 Some risks ore harder to quantify though. If you fly economy class, you may be exposing yourself to the health risk of excessive sitting. It damages blood vessels and may lead to Deep Vein Thrombosis which can cause sudden death. From this news article of 23 Oct 2000:

Emma Christoffersen, 28, died from deep vein thrombosis (DVT) believed to have been caused by sitting for several hours on the 12,000-mile flight to Heathrow from Sydney. Medical experts said she was one of the youngest victims of DVT, a sudden illness caused by lack of movement over a sustained period that claims the lives of a number of airline passengers each year.

Also, you're excluding the effects of airline food. An economy class meal costs between USD 2.- and 10.-, how good is that for someone to eat day in day out?

Air travel is not an activity that is good for health if undertaken on a daily basis. During a long economy class flight people should get up for a brief stroll every few hours or so, and once landed should be vigorously walking around in the sunshine over the course of a couple of days to reset their blood flow and health before taking another flight. Like pilots do.

One study compared adults who spent less than two hours a day in front of the TV or other screen-based entertainment with those who logged more than four hours a day of recreational screen time. Those with greater screen time had:

Air travel is very safe and mortality rates are low, as illustrated in this article from The Economist. It is a good thing though that most of us only take a couple of flights a year, with ample time in between flights. But it's not only economy class travel that is bad for health. I know people who used to be up in the air on an almost daily basis for years, flying business and first class. Unfortunately one of them is not here anymore, most probably due to DVT.

All we could say for this is that we know what historically has taken down airplanes and extrapolate from that data. This site seems to be a goldmine of data on this (http://www.planecrashinfo.com/cause.htm).

According to these guys if you are involved in a fatal accident involving traveling by commercial aircraft, of the following categories of accidents are most likely to kill you:

These other factors are a mixed bag ranging from improper loading to bird strikes.

So in theory, the riskiest thing in a commercial aircraft are the guys or gals at the controls of the plane.

But as the odds of being killed in an commercial airplane crash are extremely slim, somewhere around 1:4,000,000, your most likely killer would simply be old age, illnesses associated with old age or heart disease from such a sedintary lifestyle.

19
What percentage of airplanes are involved in a crash in their lifetime?

10
What are the risks involved when doing a classic zero-g maneuver?
19
Is it technically viable to reintroduce sleeping berths?
29
What is the bag for on a passenger oxygen mask?
6
For military helicopters, what is the typical fatigue life of the main rotor dynamic components?
5
Are solar / geomagnetic storms real risks for commercial aviation?
1
What safety precautions are taken for an airline prototype test flight?
7
How to safely handle AVGAS (100LL)?
13
Were propeller airplanes significantly more "scary" to fly in compared to modern jet ones?