Why is the front section of the Su-30 not aligned with the longitudinal axis of the body?

Please take a look at the picture of the Su-30 below. You will notice that the front section of the Su-30, from the nose to the canopy, is not in alignment with the longitudinal axis of the body. The canopy is raised vertically above the extended axis, and the front portion points downward. 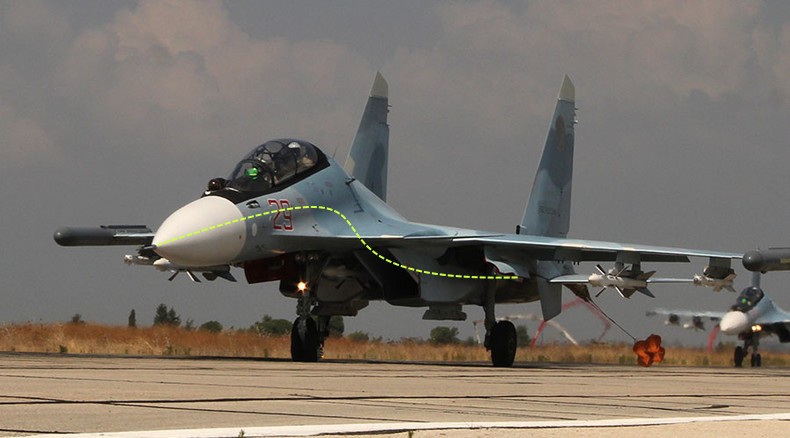 In US fighter jets like the F-18 the canopy is not raised vertically above the extended axis and the front portion aligns with the axis from nose to tail. 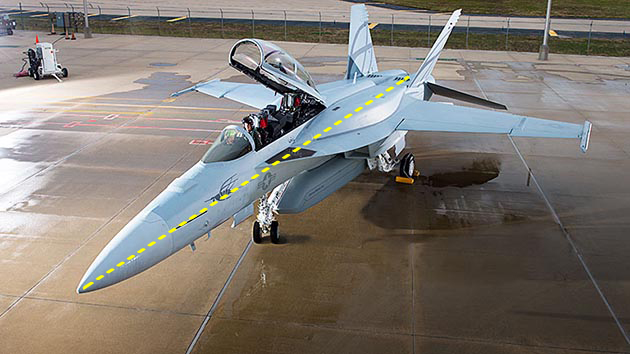 So why is the front portion of the Su-30 shaped in that manner? Is it to give the Su-30 any advantage over aircraft that do not have such a front portion?

This is not necessarily the best way to look at this airframe; it is better observed in a 3-view to understand this.

Viewed from the side and top, the main fuselage does not curve down but blends into pancake like lifting body which mates with the wings and empennage of the aircraft; the engines then are slung under the fuselage in a linear pylon which blends into the fuselage at the tail the design is beneficial for several reasons.

The forward action of the fuselage is based upon the the SU-27UB airframe with an aft crew station raised in order to better facilitate flight instruction in the airplane this required raising this section of the fuselage. The nose and radome appear to droop down but are laid out that way to increase the real estate for a large radar antenna in the nose radome for increased detection ranges.

Like most East Block war machines, the SU-30 is brutally functional, refined only where needed and passed up for utility elsewhere. While it may appear to 'curve' the fuselage is essentially straight and the engines aligned with the COG.

We are students of aerospace engineering at the University of Stuttgart. We don’t know if we understood you fully, but it seems that you mean the Su 30 nose, which is pointed downwards a little bit.

A typical design consideration of this type of aircraft is the field of view for the pilot. The F 18 is used for aircraft carrier operations, but at high angle of attack approaches the long nose reduces the forward visibility. With a shorter and downwards pointed nose, we don’t have that problem.

We can compare the Su 30 to the Concorde, which also has a downwards pointed nose for landing purposes. The problem of reduced visibility was so severe that the engineers had to design a mechanism to adjust the nose. Furthermore, the shape of the nose had a major influence on the strength of sonic booms. Probably the nose design of the Su 30 is somehow optimized to mitigate sonic booms.

The design of an aircraft’s nose is highly influenced by the radar. That could have also led to the resulting shape.

Just a guess: the SU-30 (unlike the F-18) is a two-seat cockpit. It derives from a "combat trainer", where the rear seat too presumably needs to see out the front of the aircraft (so the rear seat is much higher than the one in front -- to see over the front one's head.)

Its for energy-maneuverability reasons. Like everything else in engineering its a trade off. 1st important fact to understand is this: In airliners, and most previous gen combat aircraft, designs are (primarily) made for flying in level (ie cruise) most effectively. At this optimal cruise point/line, the best engine fuel efficiency and aerodynamic efficiency, the lift/drag ratio, are closely matched. This is the reason why airliners have much higher wingloadings. They are great at cruise, but has to solve the slow speed performance with overly complicated high-lift devices like 3 stage flaps..

4th gen aircraft are designed for preserving energy while turning, so they DO NOT actually cruise at near their best L/D ratio.

Points below are the mathematical part to explain the sentence above, feel free to skip to the next paragraph.. When calculated with data from MiG-29's aerodynamic manual;

-Even when Cl=0,85 which equates to pulling 5,86Gs, the MiG-29 is more aerodynamically efficient than cruising at same flight conditions.

-If payload or altitude get smaller, necessary Cl will decrease, or in other words, for the same Cl and L/D plane will pull even higher Gs. On extreme example, MiG-29 with 50% fuel at sea level is more aerodynamically efficient while pulling 9Gs at M0,85 than flying straight in level. (This is not to say it requires less thrust overall; it means it requires less thrust per lift generated.)

While all calculations about Cl may seem irrelevant to nose angle, it is not.. Cl is also directly proportional to angle of attack (AOA). Summary from all these calculations is this: irrelevant of weight or flight conditions, if you fly MiG-29 even at 12 deg AOA manuvering, it will be more efficient than flying it straight at just 1 deg AOA.. Point where Mig-29 is most efficient is maneuvering at 4 deg AOA, not cruising at 1 deg. This is a physical necessity for energy efficient maneuvering and applies to planes like F-16 as well.. An F-4E can turn well, but cannot really sustain that turn. These different design choices and optimizations is what "designed for sustaining high G turns" actually mean.

Getting back to Su-27/30.. I think the basic reasoning is quite obvious at this point. Nose of the aircraft doesn't create any meaningful lift, it creates only drag, reducing the L/D, and making the plane less efficient. If you make the nose sit at a certain angle like ~6 degrees in Su-27, it makes aircraft more efficient at around that angle of attack, but its less efficient at the others.. In the most basic sense, by pointing the nose downward, designers trade level flight fuel efficiency and acceleration performance at the higher speed + lower altitude parts of the flight envelope.. At the same time they get better sustained turn performance and better acceleration on the low speed high altitude part of the envelope. MiG-29, F-15 and F-16 also has their nose pointed slightly downwards by the way. Not as extreme as Su-27 so they are only visible in 3-view drawings but still..

From more advanced perspective, it gets even more complicated.. Su-27 uses airfoil sections throughout its body; its the only true blended wing + lifting body design ever created (Though MiG-29 looks very similar it isn't aerodynamically, its more comperable to F-16 than Su-27). A cross section of Su-27 from right next to its nacelles is still an airfoil. A cross section from its nose to the tail stinger is still an airfoil if you exclude the cockpit canopy. On a such complex design no one could say for certain how flow behaves for certain.. Su-27 is a true marvel of aerodynamics engineering, and since newer designs has to take other considerations like stealth shaping and have a fat fuselage with internal bay, it may very well be the peak of what aerodynamics engineering will ever create; as far as maneuverability is concerned that is.

A hypothesis could be drived from how the Su-27 and MiG-29 were developed. The Central Aerohydrodynamic Institute provided both projects with optimal wing studies. The wings were then "dirtied" with details such as cockpit, engines, fuselage for avionics and fuel, and empennages. The plane is basically divided along the wing plane - cockpit and fuslage above, nacelles below - with lifting-body characteristics (similarly found on the F-14).

Not the answer you're looking for? Browse other questions tagged aircraft-design military fighter su-30 or ask your own question.

3
Why is the nose cone of Russian fighters pointing slightly down?
0
What is the main source of yaw stability?

46
Why aren't airliner windows aligned with their seats?
5
Why do the engines of the PAK FA (Sukhoi T-50) seem not to be not aligned parallel to each other?
3
Why does a dual-axis autopilot not allow operation in single-axis?
32
Why does the A380 not have front windows on the top floor?
2
Why are smaller wings in the front with these VTOL aircraft?
3
Is it common for panels on a plane's body to not be perfectly aligned?
3
Why are winglets swept back and not front?
51
The F-16s that were scrambled to intercept United 93 did not have time to arm the jets, so the pilots were going to “ram it” how does that work?