What would the density profile of this shock wave look like, roughly?

The YouTube video titled Shock Wave Formation in Transonic Flight shows a hand-held video of a visible shock wave extending from the top of a jet engine near the front. The shock wave is visible by its refraction of features on the ground (muddy river bed) cause by the large changes in air density over short distances.

I would like to simulate the optics of this strictly for fun and general interest. If one made a simple plot of the density as a function of position crossing the shock wave, roughly what shape would have?

I've plotted six simple examples of shapes, perhaps one is appropriate, but perhaps something else is better.

below: some example guesses of the density behavior across the part of the shock wave seen to refract ground features in the video. 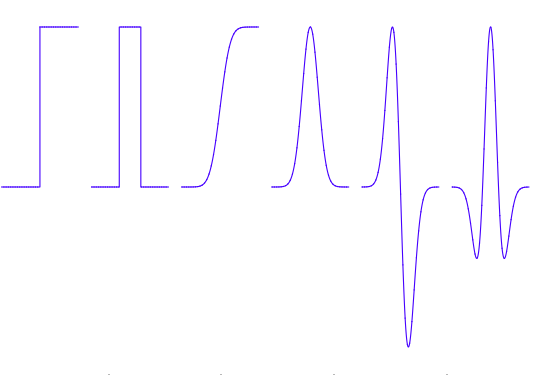 below: Description from this video.

Formation of a shock wave around the engine cowl of a Boeing 767 at high speed.

The aircraft itself isn't going supersonic, but it's going fast enough (probably around Mach 0.8) that the local airflow around the engine cowl is supersonic, in a small area. This is called "transonic," and results in the formation of a shock wave at a right angle to the surface of the plane. The air in front of the shock is supersonic, and the air behind it is subsonic.

The shock wave is visible because of the abrupt change in the density of the air. The change in density causes a change in the refractive index of the air, and so the scenery behind it is optically distorted. This is similar to how a spoon in a glass of water looks "bent" at the water's surface, due to the difference between the refractive indices of water and air. It helps that this is seen nearly edge-on... if I had been a couple of rows further forward or back, it might not have been visible.

The shock observed is effectively the same as the one over a wing. Compression waves are normally considered of infinitesimally small thickness, although due to the non-continuous nature of gases made of particles, this normally makes the shock on the same order of magnitude as the mean free path of a gas molecule (See here for the values at different altitudes).

For visualization's sake, here's a CFD from a transonic NACA0012 airfoil with a shock on the suction side, and a plot of the density gradient on its surfaces. The step in density is not a pure discontinuity, as it would be physically, due to the relatively coarse mesh used, but I hope it still delivers the idea. 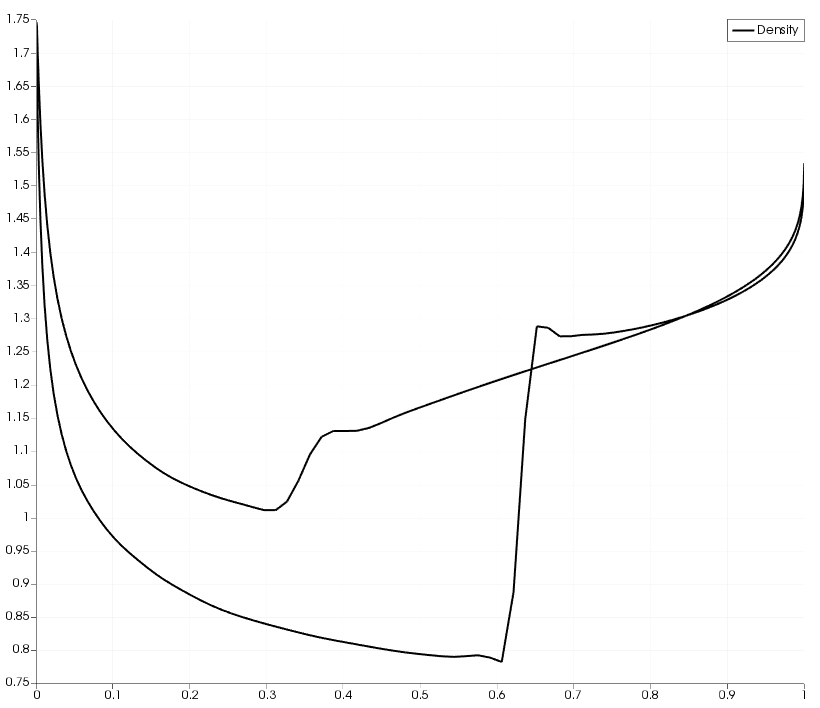 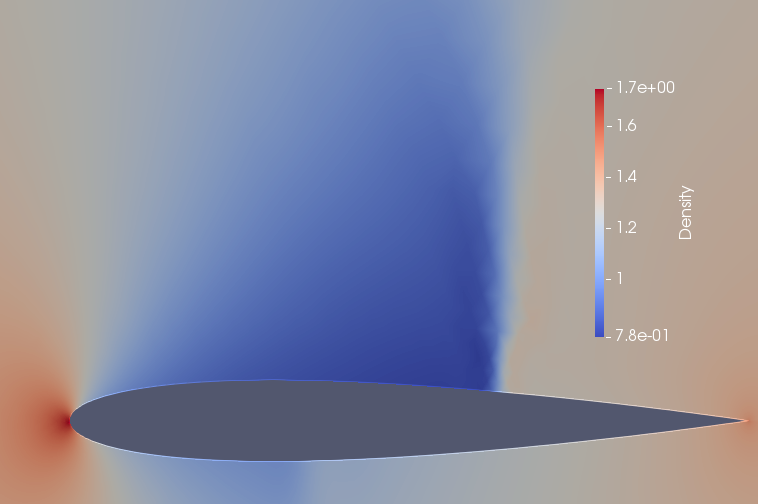 Not the answer you're looking for? Browse other questions tagged shock-waves transonic or ask your own question.

12
How is the camera positioned for these plane-to-plane Schlieren images of shock waves?

6
What do the components of a shockwave's visual artefacts represent?
7
Why is the flow ahead of a shock wave chaotic?
12
Can a supersonic plane use a subsonic wing if the nosecone shock produces subsonic airflow around the wing?
0
What happens to the pressure and density of air passing through shock waves?
1
What is the difference between a shock wave and an expansion wave?
1
What is primary cause of shock induced separation (shock stall)?
5
Why do 20-series Learjets have such an extreme susceptibility to mach tuck?
6
Why does the temperature rise in the boundary layer after a shock wave?