What is the APU actually used for?

What are the actual uses of the APU? When is it used? When does it go off? 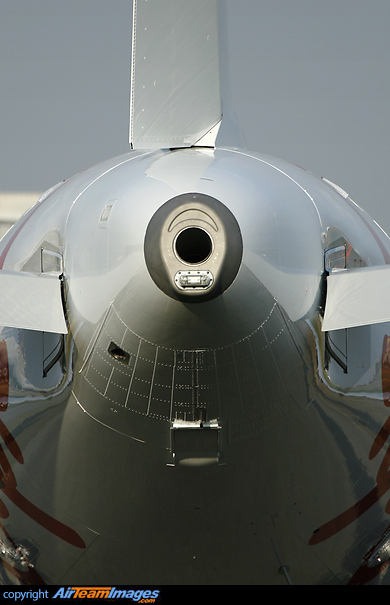 Assuming that electrial and air was not available from a ground cart, the APU on a cold airplane would be turned on when the airplane was opened up and turned off after the engines were going.

Prior to landing, the APU would usually be turned on a few minutes before landing. It would be left on until a ground cart (if any) was hooked up or until the aircraft was vacated and closed up.

Other aircraft types and operators employ their own procedures, and their APU uses may differ. 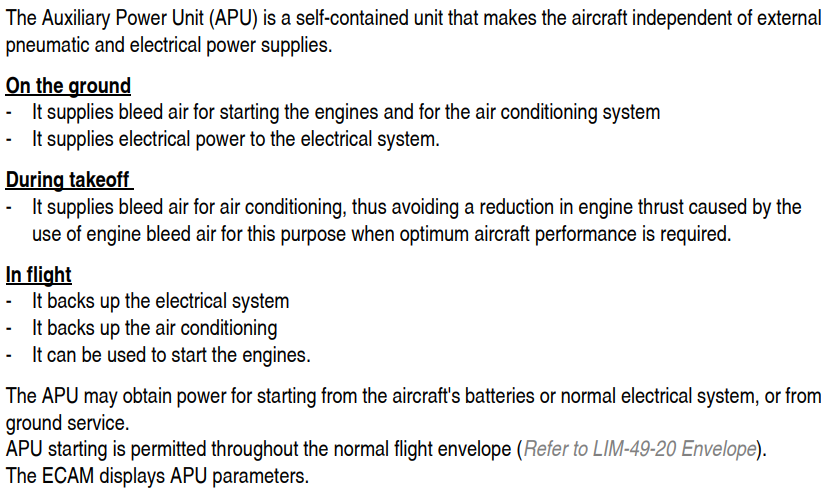 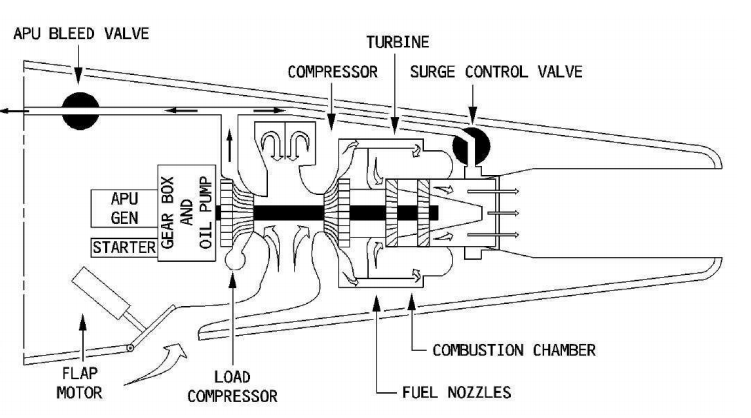 It provides the aircraft electricity and bleed air. In german APU translates to "Hilfstriebwerk". This directly translated into english means "Helping engine". That's why some german speaking people think this is an additional engine to provide thrust for the aircraft. The APU does not produce any thrust when running. However, it can help the engines producing more thrust, when turned on.

The main uses for the APU are following:

Providing electricity at the gate, when no engines are running

At most airports, big enough to fit an aircraft equipped with an APU, there are GPU's (Ground Power Unit) available. A GPU is the same as an APU, but is on ground, connected with the aircraft. 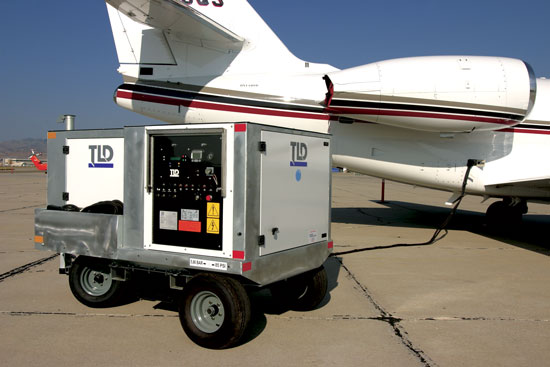 However, if the airport isn't equipped with such units or there is another reason they can't be used, the APU can replace all of them.

It is providing the electricity for the plane and the bleed air for the packs (air conditioning) and the engine start.

But note: The above mentioned ground units, usually don't replace the APU if they are available. Because usually, the engines are started during pushback, there can't be a ground unit connected to the aircraft.

To answer your question for this part, when the APU goes on and off: It usually will be turned on before pushback, or if there is no GPU, upon entering the cabin. After all engines have started and are stabilized, the APU can be turned off.

In case of an engine failure the APU is turned on, to assure the operation of all aircraft systems. The electrical power for the avionics and the hydraulic power to control the control surfaces.

Providing bleed-air to start the engines

All big jet aircraft are using pneumatic power to crank the engines. This can be done with the bleed air of the engine, the Air start unit on the ground or the APU. As mentioned above, engines are usually started during pushback, so the APU is mostly used to achieve this task.

Turning the APU on is also an item on the after landing checklist. As the APU needs some time to spool up as well, it is started after landing. When at the gate, the engines can be shut down directly. The APU just supplys electricity for the period between engine stop and connection of the GPU.

If you want to inform yourself deeper, you can look into the A320 FCOM. The APU section is starting at page 906.

The APU, auxiliary power unit, is a generator that provides electrical power to important systems of an aircraft when the engines are not running. During normal operations, the APU is used on the ground just prior to engine start, and sometimes on the ground after landing. In unusual situations, such as an airborne engine failure, the aircrew can also choose to turn on the APU to ensure power is supplied to critical systems.

Not the answer you're looking for? Browse other questions tagged aircraft-performance airbus apu or ask your own question.

18
What is this hole on the left wing of the Eurofighter Typhoon?
3
Is cabin air freshened when a plane is taxiing or on the ground?

21
In what conditions is the APU used in midair?
10
Can airliners operate without an operating APU?
5
What type of engine/motor is used in aircraft APU?
16
What is the purpose of the fin at the Boeing 787 APU exhaust?
2
What is the difference between an APU and an ATS?
16
What is an "all-electric APU"?
8
What is the fuel source for the APU on a B737?
4
In normal condition, is the Airbus A320 APU fuel supplied by the main engine boost pump only?
4
What does the PBY Catalina's APU look like?
1
What's the starting envelope of APU?