Is the number of private pilots increasing or decreasing?

My interest into aviation grows by every day and I seriously start thinking about working in the industry later, as I am very interested into avionics and pilot supporting devices in the general aviation field.

However, what's the trend in general aviation at the moment? Is the number of PPL stagnating, rising or even decreasing. It would be nice if you have data about Europe, the US and International.

The statistics for the number of pilots in the US is fairly easy to come by, The Aircraft Owners and Pilots Association published a report on the number of FAA certified pilots. This shows a general static trend over the 10-or-so years preceding the report in 2011

The graph shows the total number of pilots since 1929. 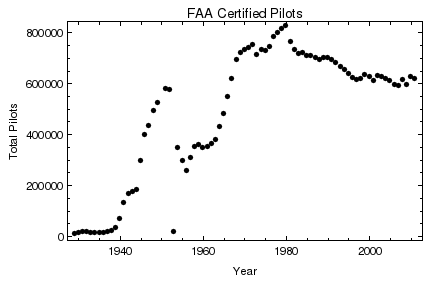 For Europe, this statistic is a little harder to come by. In general, Aviation in Europe is controlled by the European Aviation Safety Association to which pretty much all European countries are members, with a few having a working arrangement to sync up their procedures/licensing. The EU, and its associated agencies are typically bureaucracies at their best (worst!) and so there is unlikely to be a single register of the number of pilots.

For example, some elements of aviation (although NOT Licensing) is still managed by the UK Civil Aviation Authority. With all the various european and intra country agencies involved in European Aviation it will be tougher to get figures for the number of pilots.

Internationally your problem is moreso. With tens of different agencies involved in the Flight Crew Licensing, you may find it harder still to get some accurate figures.

Not the answer you're looking for? Browse other questions tagged general-aviation ppl or ask your own question.