Does the cannon of the A-10 deliver more thrust than the engines do?

The A-10 Warthog is built around a 30 mm cannon that fires depleted uranium rounds, 65 of them per second.

I heard from someone who worked on the flight controls a long time ago, that when the cannon is fired it provides more thrust than the engines. Is this true? What are the effects of this?

The original question was answered by @Gypaets: thrust of the cannon is comparable to thrust of one engine. The wikipedia article on the GAU-8 cannon mentions that effects of thrust of the cannon are well accounted for by placing the firing barrel at the centre line of the air frame. Ron Gordon's answer reveals some interesting side effects from spooling the cannon up and down when operating - the aircraft bucks. It's a big cannon. 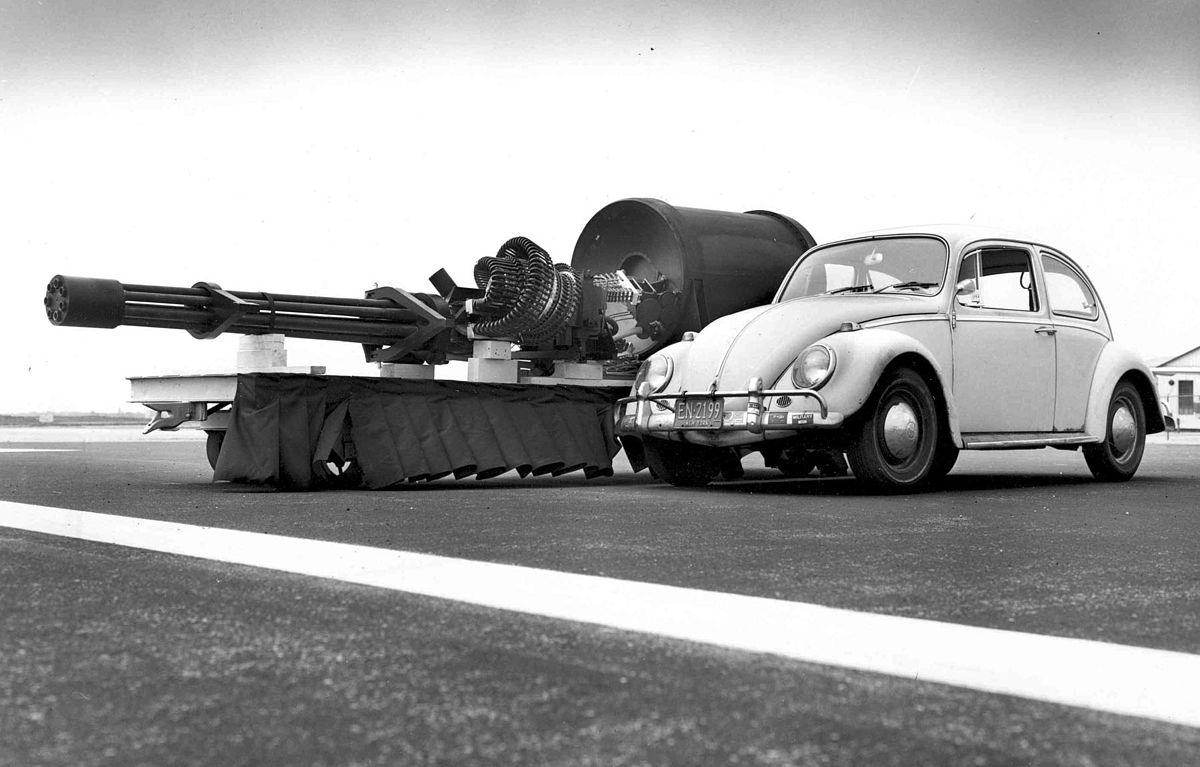 Not only does it affect air speed, but also angle of attack (AoA) and yaw. The gun is well forward of the center of gravity (CG); so add to the recoil vectoring a build up gyroscopic torque as the gun spins up and down. As air speed decreases, maneuvering approaches instability, thus placing a limit on the length of a safe burst determined by available energy (altitude, AoA and air speed.) However, grouping accuracy and ammo conservation usually are more limiting than the effect of gun "drag". Each A10's gun performance is distinctive. Once a burst begins, the aircraft will pitch and yaw in its peculiar manner. On the HUD you might find a wad of gum placed there by the pilot after his first aiming burst to show the direction of push.

The A10 employment scenario has always included battle field loiter to provide air cover, ensure extended engagement coordination, and provide tactical intel directly to the ground commander! Even low and slow, its hard to hit. Most infantry borne G-to-A missiles are IR guided. The A10's exhaust is hidden from below by the horizontal stabilizer; and the RAW/IRW system can automatically launch "angel flares" when the launch is detected, thereby negating any IR guidance system. Meanwhile you have just poked the bear and left your location for immediate response with an array of launch-and-leave air-to-ground guided weapons.

The average recoil force of the GAU-8/A is 10,000 pounds-force (45 kN), which is slightly more than the output of one of the A-10's two TF34 engines (9,065 lbf / 40.3 kN each). While this recoil force is significant, in practice a cannon fire burst only slows the aircraft a few miles per hour in level flight

Your statement is only partially true: two engines have more, but one engine has about 10% less thrust than the recoil force of the cannon.

As pointed out in a comment by @tj1000 the recoil of the GAU-8/A wasn't such a problem as the smoke from its shell propellant. If you're looking for the video mentioned in the comment (test pilot ejection due to engines out after firing ammunition with a new flash suppressor) this is the link (12:08-13:59).

As Gyrates points out, no. The recoil from the GAU-8 doesn't completely counteract the thrust of both of the A10's TF-34 engines, but it will definitely slow the plane down. That is a factor before firing the cannon - is your airspeed sufficient to withstand a slowdown?

The same holds true of WW2 fighter aircraft with multiple heavy weapons - firing at slower speeds could stall the plane.

One airplane that did battle serious recoil issues was the WW2 B25 variant that mounted a 75mm cannon in the nose. Apparently, the recoil from the cannon was quite severe, and definitely impacted airspeed.

AC130 crew report that firing the side mounted 105mm howitzer will boot the tail of the plane around quite a bit.

Not the answer you're looking for? Browse other questions tagged military engine fairchild-a-10 or ask your own question.

35
How much is airspeed reduced on an A10-Warthog when firing its cannon?
23
Why do modern fighter jets use 20mm guns?
13
What does the term “white-scarf Air Force” mean?
10
How does a combat aircraft handle the recoil force of a mounted gun?
9
Why can the A-10’s engines flame out merely from ingesting smoke from its gun?

6
Why is the 60-year-old NK-12 more fuel efficient than Europrop TP400?
18
Why do reciprocating aircraft engines have more than one spark plug?
16
How do rocket engines produce more thrust than aircraft jet engines?
17
Are turboprops more efficient than piston engines (thrust per fuel consumption)?
24
What is the purpose of the box between the engines of an A-10?
8
Does the A-10 Thunderbolt fly without the GAU-8?
6
Is the A-10's cannon effective against tanks?
0
How does thrust relate to horsepower on turbocharged engines?
9
Why can the A-10’s engines flame out merely from ingesting smoke from its gun?