We found this part of an aircraft recently and, in order to improve the safety levels at our airport, we would like to know what possible aircraft model (or models) are compatible with this cover so we can locate it. 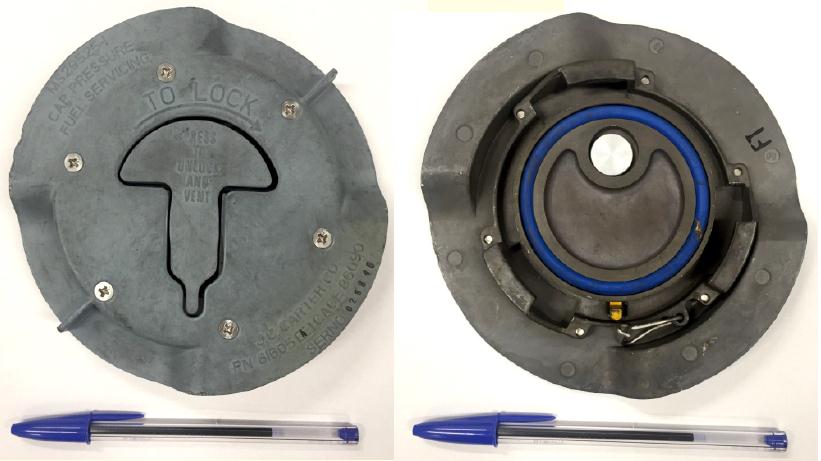 This is a Military Standard fuel cap, part number MS29525-1.

Here is the DOD page for the products: MS29525-1. It is most likely from a military aircraft or some kind of private ex-military warbird.

There really isn't much to say on it, other than it is used by the Air Force and Navy, as well as some British aircraft. It is a universal part used on many different types. It is a serialized part, you could try calling a local airbase and see if you can get records for it, but they will probably not care enough to track it down.

By the way, whoever is missing it, if a private party, paid a dear price for losing it. The cost of these caps in the private market range from \$600 to \$800.

Not the answer you're looking for? Browse other questions tagged safety feature-identification or ask your own question.

11
When do conditions permit doing a controlled fly-by over the runway of a commercial airport?
22
Would a roll cage plus a safety harness make a small GA aircraft accident more survivable?
6
How does one determine if an airplane meets airworthiness directives?
34
Is a helicopter ride unsafe for young children?
3
What construction standards are used to increase impact survivability of passengers in case of a crash landing?
0
What should I expect to happen when I get on a skydiving flight
10
What are these clip-like things?
5
What is this part on the Me 262?
10
What is this unit above the autopilot panel in Boeing test aircraft?