Was the miracle on the Hudson saved exclusively by the APU?

In the film Sully, (staring Tom Hanks) the APU is switched on straight after both engines rollback, why was this step necessary; Airbus said this was the "15th thing" to do on the checklist.

How or why did this step in particular prevent the loss of lives of over 100 people?

Yes, the solution to start APU was important.

The ditching procedure directs the use of maximum available slats and flaps for the final approach and touchdown (source, chapter 10.3). This is not possible without APU, as Airbus A320-214 cannot move flaps if only powered by RAT (only blue hydraulic line, same source, chapter 9.3). The running APU adds the green hydraulic line that can also move flaps.

Hence, without running APU, the optimal ditching procedure is not possible; that gives less chances for success.

The engines provide electrical and hydraulic power to the systems that control the flight path of the aircraft: elevator, aileron etc. If all power is lost, a Ram Air Turbine (RAT) is deployed which spins up and powers the systems from the airspeed. However, this creates extra drag.

The RAT deploys automatically upon loss of AC bus 1 and AC bus 2. This takes a while after engine fail since the engines spool down - if APU is switched on before the buses are detected down, the APU then powers the AC buses and the AC pumps that drive the Blue and Yellow hydraulic systems. Below 125 knots the RAT stalls.

The RAT was found deployed in the accident report. It has an automatic blade pitch adjust system that retains constant speed under load - if the RAT is deployed and needs to provide the backup power for Blue hydraulic and AC electrical, it extracts energy from the air stream and provides extra drag. If the APU provides power for electrical and hydraulic systems, the RAT windmills and there is less drag.

The A320 had just taken off and did not have much altitude yet. Aircraft without engine power can glide - the distance they can cover while gliding depends on the starting altitude of course, but also on Lift over Drag: the lower the drag, the further the aircraft can glide. Switching on the APU provided them with extra gliding distance due to less drag - although that may not have been the captain's main objective, it may have been an attempt at engine start.

They needed all the distance they could get, and all the clearheadedness that could be provided. And that is what the pilots delivered. Switching on the APU bought them time, and more choice in landing the plane at a suitable spot. The situation was not exclusively saved by switching on the APU, it was a factor in a chain of events where everything needed to be right - and it was.

No, the "Miracle on the Hudson" flight was NOT saved exclusively by the APU.

Airline flights are routinely dispatched with a non-operable APU. It is not needed or required to complete a safe flight.

On the Boeing B777 starting the APU(if avaialable) is number 5 in the checklist for dual engine failure. 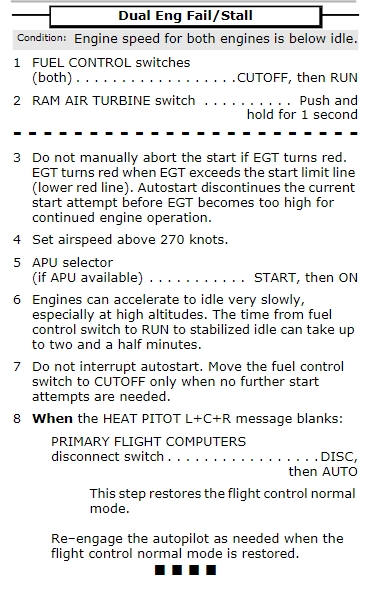 In my opinion the starting of the APU had very little to do with the success of the water landing and survival of all the passengers and crew.

Sully is on record as saying he started the APU to provide an addition electrical source: Sully Speaks Out

I had taken by memory the first two remedial actions that would help us the most, that we would later get to on the checklist over a minute later, over a third of the way through the remaining flight time, and that was to turn on the engine ignition so the engines would recover if they could (it turned out they were irreparably damaged), and I started the airplane’s auxiliary power unit, the APU, to provide a backup source of electrical power. Since this is a fly-by-wire airplane and there’s no longer a direct mechanical connection with the flight controls, instead you have electrical impulses that are fed through computers that then move actuators.

In this particular case the APU may have allowed a slightly longer glide, but that would just have meant touching down on the water slightly upstream from where they did touch down. 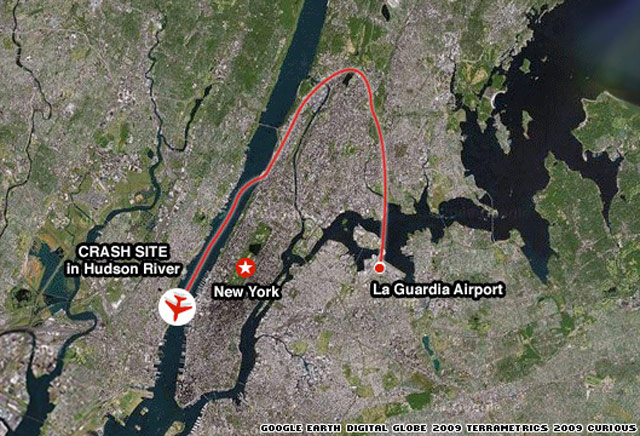 Jep, I think it was very beneficial to the outcome of this event. However I think that in addition to the reasons stated here, the APU also prevented Sully from stalling the airplane.

If I remember correctly, if all electrical power is lost/provided by the RAT, the airplane goes to "direct law" mode. This means, that all inputs by the pilots are translated directly into proportional movements of the flight control surfaces. The systems that usually keep the pilot from getting the plane into a unrecoverable situation are deactivated. As Sully pulled the plane up just before touchdown in order to execute a flare, he would have stalled the airplane, had the fly-by-wire system not prevented him from doing so. As this system would not have been active if he had not switched on the APU, he would have dropped into the water like a stone.

So yes, the APU saved the day, by reducing drag, burning a tiny bit of weight of, moving the flaps, and keeping Sully from stalling.

Not the answer you're looking for? Browse other questions tagged safety emergency flight-controls pilot-technique apu or ask your own question.

16
Can the APU provide emergency thrust?
4
Why is powering on the APU so low on the A320 emergency checklist?
2
Viability of Magnetically started engines

12
Where does the APU draw its intake air?
22
What scientific evidence is there about the effectiveness of pre-flight walk-arounds?
80
How miraculous was the miracle on the Hudson?
8
Why weren't the Airbus A330 engines designed with a system to stop their fans?
4
Why is powering on the APU so low on the A320 emergency checklist?
9
Flying VFR in uncontrolled airspace, what to do if one spots an apparently out-of-control fire on the ground?
29
Why is the most common hydraulic fluid so poisonous?
6
What switch was Skiles talking about shortly before the Hudson landing?
1
What's the starting envelope of APU?