"Arrival delays typically are absorbed at a metering fix. This fix is established on a route prior to the terminal airspace, 10000 feet or more above the airport elevation. The metering fix facilitates profile descents, rather than controllers using delaying vectors or a holding patterns at low altitudes."

I cannot get my head around this concept. So how does a metering fix work to absorb arrival delays? What's exactly a profile descent and how is it related to the metering fix? What merits does it have as compared to delay vectors and holds?

Definitions from this page.

A method of time-regulating arrival traffic flow into a terminal area so as not to exceed a predetermined terminal acceptance rate.

Airport adapted for metering and for which optimum flight paths are defined.

A fix along an established route from over which aircraft will be metered prior to entering terminal airspace. Normally, this fix should be established at a distance from the airport which will facilitate a profile descent 10,000 feet above airport elevation [AAE] or above.

But behind these definitions, that's a whole domain under research and experimentation to shape the future of air traffic management.

Metering methods are currently designed to respond to traffic increases, resulting airports congestion, and requirement for fuel saving and less nuisances from aviation. Solutions are known collectively under AMAN acronym for Arrival Management.

As said, this fix is established on a route prior to the terminal airspace, 10,000 feet or more above the airport elevation. It can be the feeder fix.

The concept is to manage cruise speed to arrive at the metering fix on time instead of holding/vectoring before (or in) the terminal area. ATC can determine in advance times aircraft will be allowed into the TMA, based on aircraft capabilities, traffic and weather). ATC is able to issue an "EXPECT descent in n minutes" to facilitate planning by crew using their FMS.

This allows for limited vectoring and holding prior to the TMA. When holding/vectoring is still needed, it happens at higher altitude, which is better for noise/emissions management. 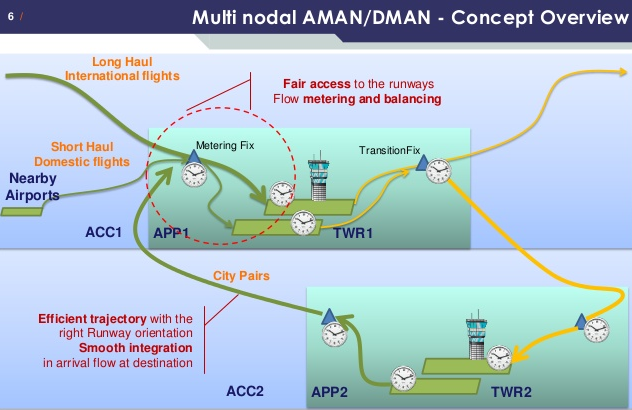 For example, there is a metering for arrival at Sydney. Sydney has a curfew at night, aircraft are descended in the order they arrive, which encourage crews of early flights to arrive before the end of the curfew and hold. But because many crews use this trick, waiting time increases. By using metered arrivals (ALOFT in-house system and MAESTRO AMAN from Thales), crews are provided with a narrow time window for crossing metering fixes, one at 160 NM from the airport, the other at 40 NM. Once you have the window, there is no need to hurry and then wait. The time crossing the first metering fix can be provided up to 1,000 NM before arriving at this fix.

What's exactly a profile descent and how is it related to the metering fix?

The descent profile is the curve of altitudes followed for descent. The most efficient way to descend is the continuous descent without level segments. The aircraft just glides with idling engines and clean configuration (less noise, less fuel, reduced wake).

This profile is only possible if nothing prevents descent at any point, e.g. congestion in the terminal area. By ensuring a free descent after the metering fix, this portion of the descent can be optimized for fuel saving and noise reduction.

So how does a metering fix work to absorbs arrival delays? What merits does it have as compared to delay vectors and holds?

The idea behind AMAN is to regulate traffic as far upstream possible, start sequencing early, and prevent wait time in flight. There is a complementary solution which is currently investigated too: DMAN for Departure Management, with transition fixes (also visible on the picture).

AMAN and DMAN systems can be coupled. As pointed out by @Lnafziger, metering fixes can be used farther upstream than the terminal area, up to departure. Such upstream fixes are visible on the picture. If we add Surface Management (SMAN), block-out times can be optimized effectively, minimizing taxi and airborne time, and at the same time minimizing delays and nuisances.

These systems tend to switch from distance sequencing to time sequencing. This field is currently being actively experimented, both in the US, Europe (LFPG experimenting coupled AMAN/DMAN) and Australia and a few other locations. 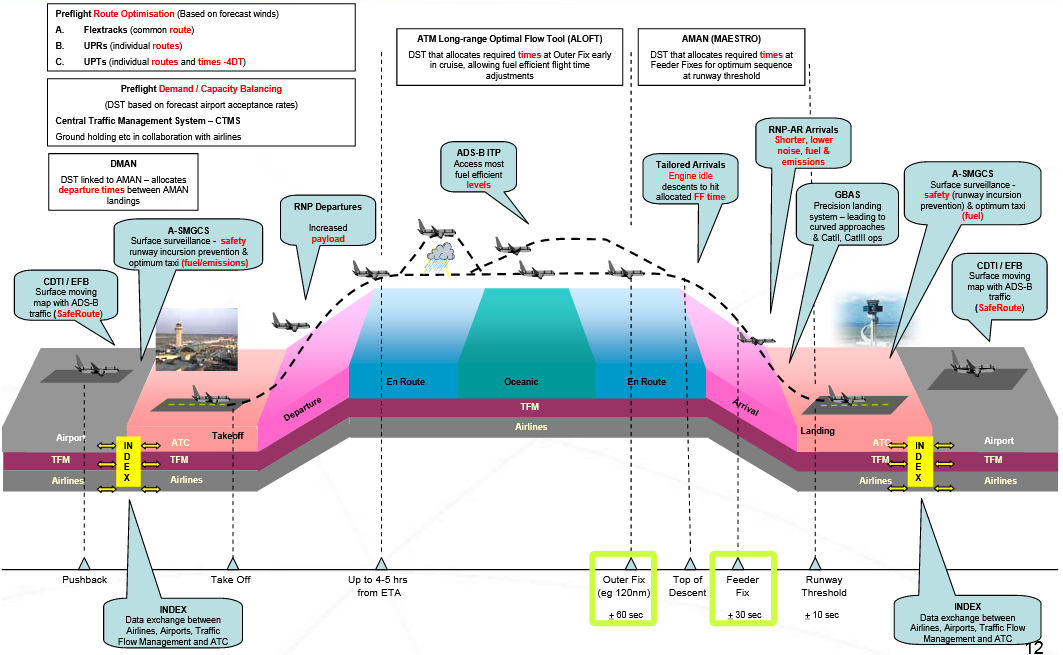 I hope @DeltaLima will show and provide additional elements for Eurocontrol.

Not the answer you're looking for? Browse other questions tagged aeronautical-charts sid-star or ask your own question.

6
What's the standard print size for a sectional chart?
4
What is a radar fix?
6
What's the precise meaning of "landing south (north, east, west)" in STARs?
1
Need help to clarify the terms "arrival", "departure", "approach", "terminal" and "transition" fix for US STAR and SIDS
5
What is the role of an intermediate fix?
1
How can I find a final approach fix (FAF)?
13
Gas Venting Stations: What's The Big Deal?
8
Can you change airways when they cross without a named fix?