Which specific version of English are international pilots and ATC required/recommended to learn?

Are international ATC and pilots technically required to learn British English, American English, or something else? I've heard it said that they are "supposed to speak ICAO standard phraseology, which just happens to be made up of English words," and that many ATC and pilots speak precisely as many English words as they need to scrape by. Even if they aren't explicitly required to speak AmE or BrE, they are still indirectly required to speak whichever version ICAO standard phraseology is based on, so if that is the case, which version would this be?

Some other things that I'm not asking about directly but might be helpful in providing a complete answer: a bit more about ICAO standard phraseology - is it considered a separate "controlled language" like Simplified Technical English, which was incidentally (or maybe not) developed for use in aviation maintenance manuals? Is it a subset of STE?

The FAA bases English proficiency on the ICAO Level 4 English Language Proficiency Criteria, which don't mention any particular dialect or variant of English. Instead, they focus on the speaker's ability to communicate and they explicitly accept that the speaker may make mistakes (emphasis mine):

Pronunciation, stress, rhythm, and intonation are influenced by the applicant’s first language, but only sometimes interfere with ease of understanding.
[...]
Basic grammatical structures and sentence patterns are used creatively and are usually well controlled by the applicant. Errors may occur, particularly in unusual or unexpected circumstances, but rarely interfere with meaning.
[...]
There may be occasional loss of fluency [...] but this does not prevent effective communication

It's clear that ICAO doesn't expect non-native speakers to be fully fluent, and once you accept that then there's no benefit at all in trying to enforce a particular dialect. Using standard vocabulary and phrases is the real key to effective technical communication, and you can see that in many other professional contexts too.

I've met plenty of non-English speakers who can speak effectively but not fluently about a specific technical domain, but they still don't have the vocabulary to talk about their holiday plans or other 'trivial' topics. Asking what dialect of English those people speak is fairly meaningless, but Globish might be the best answer :-)

Declaring an emergency would be one of the most critical conversations, however it would be limited to something like this:

The vocabulary and the grammar used are very simple and the exchange takes advantage of the prescribed phraseology.

ICAO Chicago Convention, Annex 10. recommends using English and the local language. For both languages, local dialects are accepted as the norm. So for English there is indeed no reference to British or American, or any other variation.

Since 2003, ICAO recommends to member States to check for languages proficiency, setting the minimum acceptable level to 4. Actual and detailed requirements are found in Appendix 1 of Annex 1.

Detailed scale is found in Attachment A, ICAO language proficiency rating scale. I show here only levels 4 to 6, as 4 is the minimum expected for operational personnel. 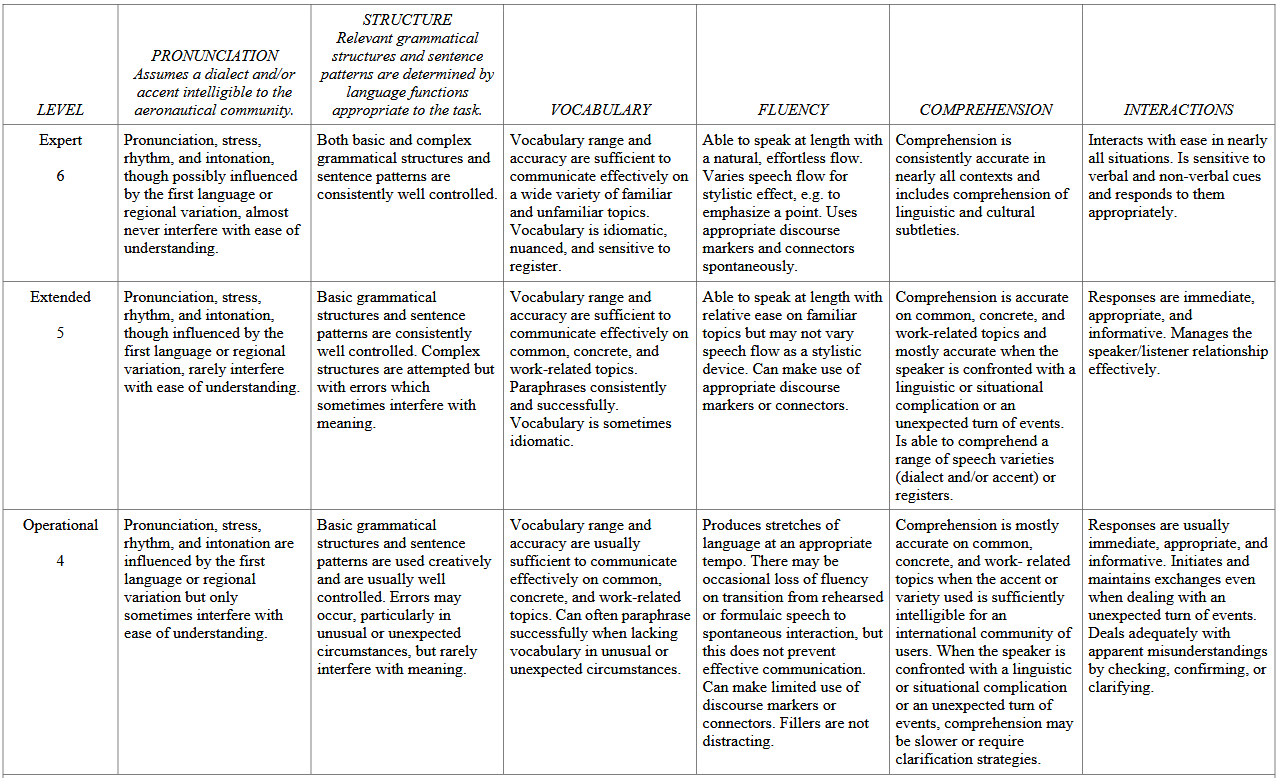 ICAO member States have agreed on a set of standard phrases that must be used instead of plain language, plain language is used only when this phraseology is not effective. There is no requirement, for crew and controllers, to study the language like an interpreter would do, they just need to be understandable.

To understand the type of conversation used in regular communications:

Chicago Convention is used at national level by member States. When recommendations are not exactly followed, this is mentioned in the local AIP, section GEN 1.7 Differences from ICAO Standards, Recommended Practices and Procedures. AIPs links can be found on this Wikipedia page.

The next paragraphs just provide the references in ICAO documentation. You may skip them if not interested.

ICAO documents can be downloaded from the the Switzerland Federal Office of Civil Aviation, on this page (in French).

Standardized phraseology must be used before plain language.

For the crews, two languages are available.

Pronunciation differences are taken into account, and there is a standardized pronunciation to be used for critical elements, like when spelling words and numbers, including when using English.

In 2003 ICAO adjusted its Annex 1 to the Chicago Convention to add language proficiency requirements:

This includes a requirement to demonstrate language proficiency, both for crews...

This proficiency has to be evaluated against a common scale.

Those that don't match the highest level will be checked again and again...

But the natives and assimilated won't be bothered. They just need to show they are understandable by the international aeronautical community.

Note that Aviation English does not specify an accent (American or British or any other). The ICAO standard phraseology words have been specifically chosen to minimise confusion that might be caused by different accents.

Not the answer you're looking for? Browse other questions tagged radio-communications icao-sarps or ask your own question.

12
What standard of English are Air Traffic Controllers held to?
3
What are ICAO English language requirements?

7
Which types of aircraft are required to carry ELTs?
69
Why do English-speaking pilots and ATC say "Niner" instead of "Nine"?
16
Which countries allow pilots to fly over the age of 65 for International Part 135 Operations?
7
Are pilots legally required to verbally declare an emergency to invoke §91.3(b)'s deviation authorization?
15
Are "Tally-ho" and "no joy" acceptable ATC terms for civil operations?
77
How do civilian pilots and ATC verify that other people on the radio are who they claim to be?