What is the difference between side-by-side vs under-cockpit engine intakes?

What is the main difference between these two engine configurations?

What are the differences between planes that have the intakes below the cockpit as compared to those who have them on the sides?

What are the aerodynamic differences?

How does this affect the speed/radar signature/maneuverability of the aircraft?

These two configurations are used for almost every existing type of small military aircraft, be it a fighter, an interceptor, ground attack or a bomber - why so? It would be interesting to know why some aircraft have the configurations that they do. 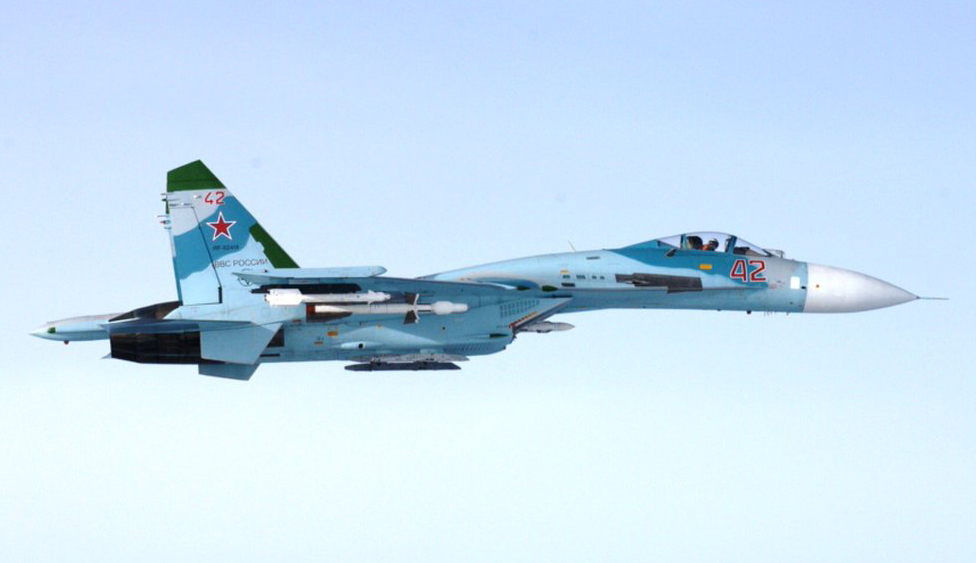 I wouldn't call the Su-27 small, but that is another issue.

The main difference is the wing planform. The Su-27 wing is optimised to work over all angles of attack up to 120° with very little pitch moment change. This requires the addition of strakes which create vortex lift at higher angles of attack. With this planform the straight side intakes would be impossible. But there is more to it.

At high angles of attack and high transsonic or supersonic speed, when thrust is needed most, the precompression below the strakes increases the efficiency of the intake.

While the F-15 was optimized for speed and transsonic agility within the usual angle of attack range, the Su-27 (and MiG-29, which uses the same basic design) are optimized to be flyable over all possible angles of attack which might be encountered in air-to-air combat. The F-15 designers stopped when the planform and intakes were good enough. TsAGI only stopped until they could not improve the design anymore.

Now to your many detail questions:

What is the main difference between these two engine configurations?

There isn't one, it comes down to details. Both designs support long, afterburning engines, show little yaw when one engine fails and the intakes allow Mach 2+ speeds. The details are less sideslip susceptibility in case of the F-15, because the fuselage helps to adjust airflow, and better high angle of attack performance in case of the Su-27.

What are the differences between planes that have the intakes below the cockpit as compared to those who have them on the sides?

Again, the main difference is in off-design performance.

What are the aerodynamic differences?

Now I run the risk of repeating myself. One is better in yaw, the other in pitch. You may decide for yourself wich is more helpful in air combat.

How does this affect the speed/radar signature/maneuverability od the aircraft?

This are actually three questions, wrapped into one. In speed the F-15 intake has a small advantage if the greater freedom in adjusting intake geometry to Mach number is taken advantage of. This means that the upper lip can be adjusted, not only the lower lip and the ramps inside, as is the case for the Su-27 intake.

For radar signature, both designs are a poor choice. They are basically corner reflectors, just like the vertical tails. You can see that stealth was no consideration in both designs.

For manoeuvrability, it is the wing planform that counts most. Here the Su-27 wins hands down.

29
What is vortex lift?
15
What are the differences between the MiG 31 and MiG 25 (if any)?
9
Why do the F/A-18 and the F-22 Raptor have horizontal stabilizer as well as canted rudders for pitch control?
7
What type of supersonic intake does the Dassault Rafale fighter jet have?
12
What is the meaning of “Docile pitch behavior” in the context of Pugachev's Cobra?
3
What drives the shape of an engine's intake on a fighter jet?
4
What different intake designs are there, and what are their pros and cons?