Why is the FOV of the Synthetic Vision of the Prodigy Flight Deck asymmetric?

Why is the FOV of the Synthetic Vision of the Prodigy Flight Deck asymmetric?

I am just reading through the manual of the Prodigy® Flight Deck 100 and came to the chapter about the synthetic vision. The document states:

According to the FAA's AC 25-11B, there is no requirement for the asymmetrical SVS field-of-view.

It's not a feature either, as in there is no benefit. Whereas an Enhanced Vision System (EVS) system benefits from an offset overlay to match the sensor's deviation to the different flight deck seat positions.

With that said, here's my guess on why it sees 5° more on the right side.

From the FAA AC linked above:

Which would explain the equal distances shown in white below. They could have been adjusted to allow a centered attitude indicator with the altitude tape being wider than the speed tape. 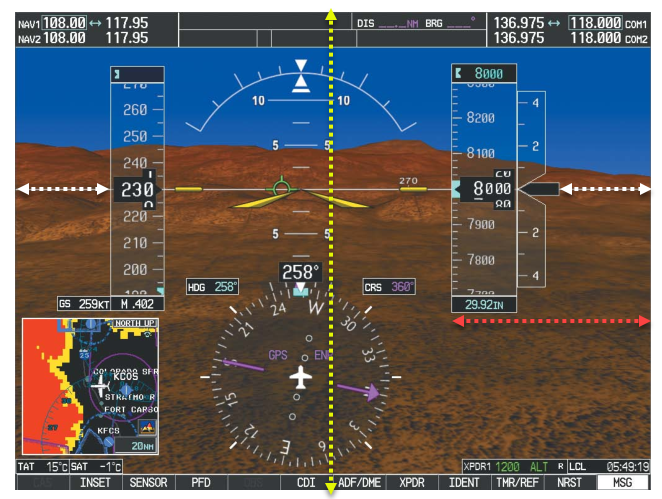 * My conclusion is based on the assumption they would want the SVS graphics to share the center of rotation of the attitude indicator. This poses a question with regard to the right seat, because as I can see from this image, the seating position is not accounted for (unlike with EVS).

But since SVS is not meant for barnstorming, I just might be overthinking it. Also, SVS does not need to show everything:

SV depictions on the PFD have the potential to provide pilots with enhanced terrain and landmark awareness during non-precision and precision approaches. However, the display may not provide depth perception and may not provide a field-of-view for pilots to know what is to the left and right of the display view area.

Not the answer you're looking for? Browse other questions tagged avionics synthetic-vision or ask your own question.

20
Why are critical flight computers redundant?
19
What exactly distinguishes a beacon light from a strobe light?
1
What dictates the shape of the attitude indicator display on the PFD?
9
What is an Enhanced Vision System?
3
What Electronic Flight Display is this?
1
Is the flight management system software independent from the hardware?
0
Should I connect the AR6203 COM radio to the GMA324 audio panel using symmetric or asymmetric wiring?
1
Are there any non-bureaucratic hurdles preventing more widespread adoption of synthetic vision?
1
Can an airline order a 777 with 787 flight deck avionics?