Can a runway turnpad be used as a runway holding position? 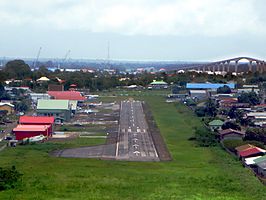 Can a turnpad also be used as a runway holding position?

No, since you must have been cleared to enter the runway to be on the turn pad. It is part of the runway.

From the point at which an aircraft is cleared to enter the runway, until it reports vacated or departs, the runway is occupied.

Not withstanding Simon's answer, the answer would be that it depends on the runway. The runway in the picture above has a displaced threshold and what appears to be a hold short (runway exit) line separating the runway from the turn pad.

The hold short line would indicate that the turn pad can be used as a place to hold while waiting for clearance for departure. With or without the displaced threshold, ATC could clear you to backtaxi onto the runway in order to reach the turn pad. Once there, you would begin holding short once the entire plane is beyond the hold short (runway exit) line. Holding there would not be an impediment to either arriving nor departing aircraft.

For departing aircraft, ATC could use the turn pad as extra room when having multiple aircraft performing Line Up And Wait maneuvers, preparing for departure. A scenario with a displaced threshold would put aircraft on the turn pad far away from the start of the Landing Distance Available.

Without a hold short line, ATC would not be able to hold the aircraft on the turn pad. Although, they could still issue a LUAW instruction by having the aircraft back taxi on the runway. It would probably then be up to the pilots discretion on where to perform a 180 turn around and where to hold as long as it is before the AER demarcating the beginning of the LDA.

Not the answer you're looking for? Browse other questions tagged runways ground-operations or ask your own question.

17
In the U.S., Is it ever legal for an aircraft to occupy the runway turnaround area while another is taking off or landing?

22
Should landing light be off during line up and wait position?
6
How are runway conditions measured?
6
What are runway Aiming Point markers used for?
5
Can we use the term CONTAMINATED RUNWAY for other meanings, such as: oil spill or debris on the runway?
3
What materials are used to build a military runway?
4
What is the runway holding short line on Taxiway B between B2 and B3 at KFAT for RWY29L?
35
Why are months (e.g. December) used to notate a runway?
3
Close Runway 16/34 from one direction
5
What is the difference between stopbars and Intermediate Holding Position Lights?