How to read the pressure diagram of an airfoil?

According to most authors, "lift is the result of the difference of pressure on airfoil sides".

My question is not about how this difference is generated, but only about the representation of the pressure around the airfoil. In particular, diagrams like this are frequently seen when talking about airfoils: 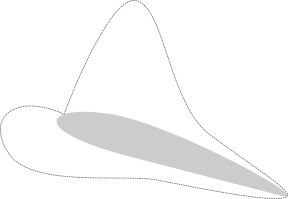 From Bernoulli or Newton's Laws for Lift?

Being not an aerodynamics engineer, I'll like to understand what can be deduced from this diagram.

4
How to plot the pressure distribution over an airfoil?

30
Principle of aerodynamic lift: are misconceptions also taught in flight schools?
3
How should the pressure coefficient distribution from a wind tunnel experiment be interpreted?
6
Should the pitching moment be up or down?
3
How to read representations of pressure around an airfoil?
0
How to calculate the drag on an airfoil from momentum equation (Fundamental of Aerodynamics 5th edition, J.D.Anderson)?
5
What is the effect of flow separation on lift, pressure distribution and drag?
14
What amount of lift would be created in the fallacious “lift from equal transit time” theory?
9
What is the physical meaning of circulation found in Kutta condition?
1
Aerodynamic Pressure Loads in FEA of Lifting Surfaces - Query