No tail rotor: use of a ducted fan within the helicopter's body, and venting the air through the side of the tail boom to get the desired anti-torque.

One big advantage is simplicity and ruggedness: no tail rotor to get damaged, no tail rotor gearbox or driveshaft to wear and/or malfunction.

Another is noise: NOTAR is quieter.

One possible disadvantage might be fuel consumption - it is quite possible that the ducted fan and the air turning a corner isn't as efficient as a propeller, so fuel consumption might be higher, but not that much higher. I haven't seen any figures on that, one way or another.

As of today, only Boeing (via purchase of M-D) uses the ducted fan in three MD helicopters, and even they haven't sold that many helicopters with this design. In all my aircraft watching, I have seen only one MD 520N in flight.

I'm just curious - other than maybe patent royalties, is there a mechanical reason this design hasn't been more popular? On the safety and maintenance aspects alone, it seems like a winner. And for military helicopters, the lower vulnerability and lower radar return would seem like big advantages.

Though NOTAR looks simple from outside, its actually a bit complicated. Let me use the following figure to elaborate on this point. 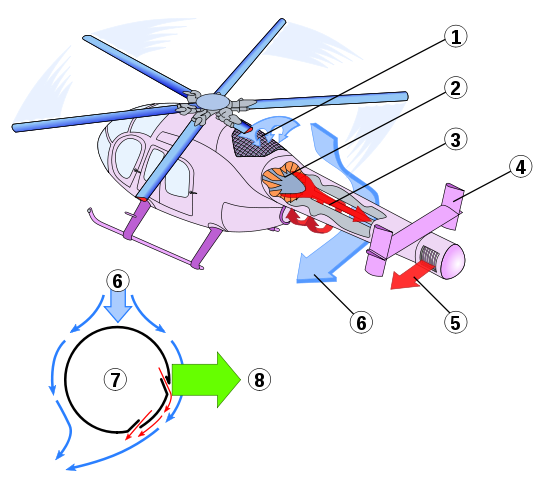 You have the ducted fan (2), which is driven using power from the gearbox, which is used to produce the anti-torque effect through Coandă effect. Note that this fan has a variable pitch, which is adjusted similar to the tail rotor.

The Coandă effect actually provides only about two thirds of the required anti torque. The other one third is provided by the directed jet thruster (5) which rotates about the tail boom axis (that is why it is projecting outside) like a rotating can.

The problem is that in cruise, the effect is markedly reduced by the airflow over the tail boom, which is overcome by making the vertical stabilizers (4) adjustable. So basically, you have three systems for adjusting the anti-torque, compared to one in the conventional tail rotor. More systems translates into more parts, more complexity, more chances of failure and more maintenance, not to mention that this makes the helicopter tail heavy. For example, when using the same engine, the NOTAR MD 520N is heavier than the conventional MD 500E (from which it was developed) (Source:1, 2).

As you've noted, this system is not as fuel efficient and sacrifices speed and range for lesser noise and improved safety. Its a tradeoff and most operator would take the better performance over others.

In case of military helicopters, the main problem for helicopters, the infra-red detection, is improved in case of NOTAR only if the engine exhaust (or part of it) is routed through the fan, as the South Africans did with the Aérospatiale Alouette III III in their Cirstel (Combined Infra Red Suppression and Tail rotor Elimination) project.

As the site explains,

The Cirstel principle splits the high pressure air from the engine for use in the Coanda slots, while the low pressure air is bled-off for the tail thruster and to mix and cool the engine exhaust. The thruster nozzle is a Denel-patented clamshell design, unlike McDonnell Douglas' `rotating can' concept.

As you can see, the system is further complicated. In addition, routing the hot air through the tail boom brings its own headaches and is better avoided. So, even in that sense, the advantage is not striking.

The fan-in-fin has been very popular with Eurocopter, most of their models have this arrangement, which they call fenestron. This one is from the EC-135, photo from the wiki page. However, they mount the fan sideways in the open, not hidden in the tail boom. One could argue that the fan-in-fin is functionally identical to a tail rotor - it has some of the advantages that you mention like lower noise, less susceptibility to blade strike, flow not impeded by vertical tail, and tail flow shielded from forward airspeed. 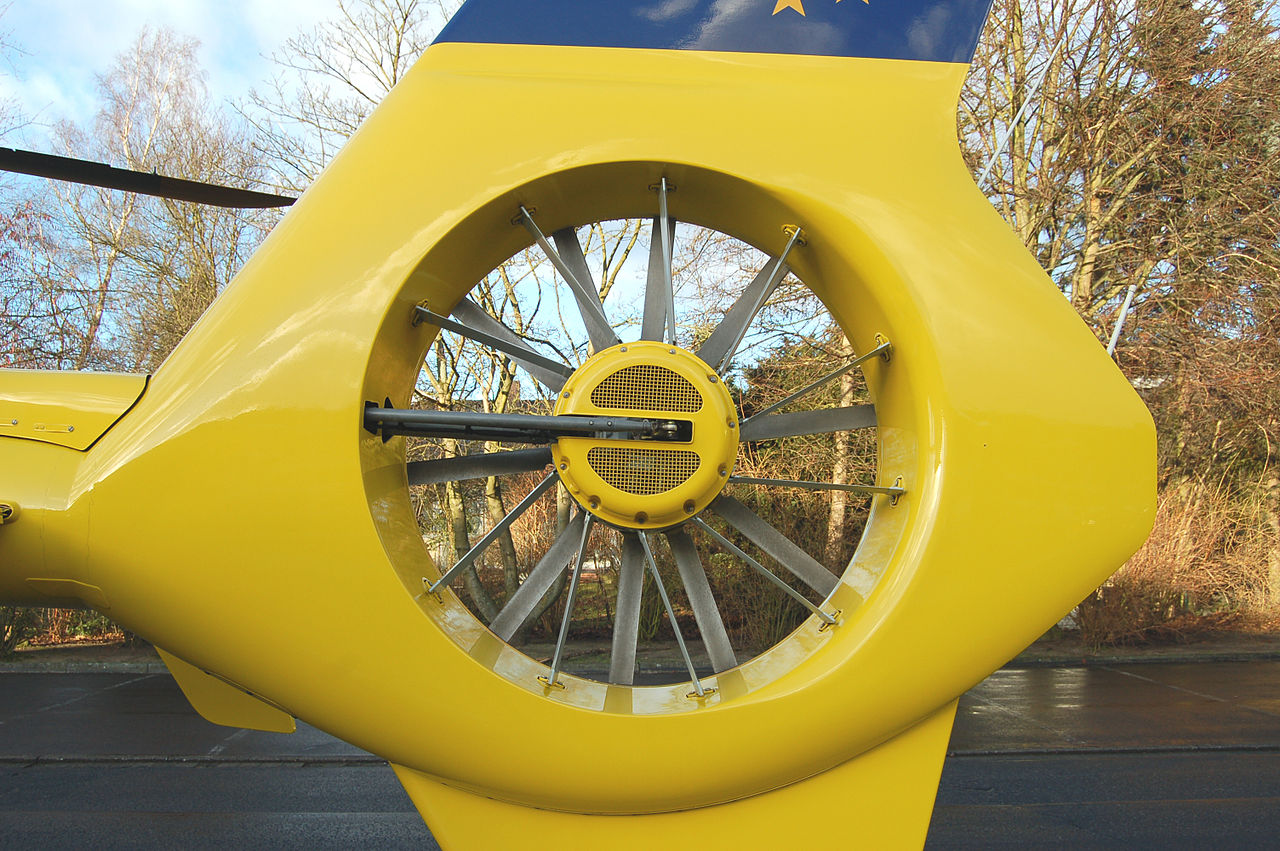 The MD 520 is a true NOTAR, it does not have an external fan but a kind of side jet out of the tail boom. Early designs used a straight jet which was kind of expensive, the Hughes design uses the Coanda effect to deflect the main rotor downwash sideways, thus providing a side force in the hover. At higher forward velocities this becomes less effective and the vertical fin needs to take over directional stability, together with a jet thruster.

If the turbine exhaust can be used directly for the NOTAR arrangement fuel economy would definitely be better than tail rotor, if the NOTAR fan is driven by the gear box there is no clear advantage over fan-in-fin other than the sound issue:

Your question on why true NOTAR is not used more frequently probably boils down to proven concepts being more trusted than innovative concepts in the field of aeronautics, if there is no very clear advantage. One could ask: why mount the fan internally, why not in the fin?

Image from Principles of Helicopter Aerodynamics by J. Gordon Leishman.

15
Why does a turbine helicopter need to spin a tail rotor?

20
Why aren't modern helicopters quieter?
2
How to calculate optimal prop diameter, pitch, torque and power coefficient given required thrust?
17
Are helicopters reinforced asymmetrically?
4
Can a contra-rotating helicopter simply tilt its entire rotor set instead of using a cyclic?
2
Is there a disadvantage to the "fan in fin" design seen for the tailrotor on many Eurocopter helicopters?
2
Why do No Tail Rotor (NOTAR) helicopters use an enclosed variable pitch fan?
4
What are the fins near the tail of a helicopter called?
19
How does this RC helicopter keep itself upright?
0
Are there any helicopters with tail rotors where slip-skid ball may be centered even when fuselage is streamlined to the airflow in cruising flight?