Is induced drag caused because of the tilt of the wing backwards?

In this question: Why is induced drag less on a high span wing?

In the answer it was stated that wing tip vortices do not cause induced drag. If this is the case then what causes the induced drag.

Thinks about this for 10 minutes

What if the Induced drag occurs because of the tilt backwards of the wing. Do the vortices just make the induced drag worse but, not cause it.

Is induced drag not caused by tip vortices?

I look at it from two different perspectives. The airfoil is designed to accelerate air thus creating the pressure differentials that make the plane fly. The higher pressure areas will try to push the wing toward the lower pressure areas. The overall sum of these forces is called the resultant force. 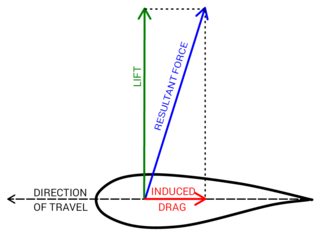 That resultant force will have an amplitude and a direction or vector associated with it. The goal of designing an airfoil is to orient those forces upward to counteract gravity. So the designer will make the low pressure areas on top of the wing and the high pressure areas on the bottom to make the vector point upward. A perfect airfoil would create a vector pointing directly upward, 180° from the ground and 90° from the direction of travel. In reality, nothing is perfect, so that vector is always pointed backward to some degree. So we break that resultant force into two components. The part we're trying to accomplish, which is 90° from the direction of travel is called lift and the remaining part which is 180° from the direction of travel is called the induced drag since it is induced by the creation of lift. Even a wing producing lift at a 0° angle of attack will still produce a certain amount of induced drag.

Now we come back to your explanation. Although any time a wing is producing lift it will also produce some induced drag, as you increase the angle of attack the vector of the resultant force tilts back with it. Not necessarily at exactly the same rate, but usually not far off. Since we are still defining lift as 90° from the direction of travel and drag as 180° from it, the ratio between the two changes. For every bit of lift produced there is a lot more drag the further you tilt the wing back. 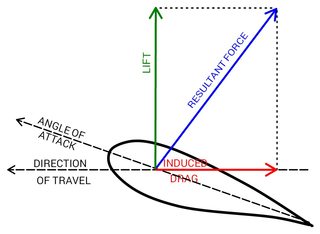 The second way of looking at it is from the inertia point of view. The intent of the wing is to accelerate air downward. Once again, a perfect airfoil would accelerate the air straight down, but in reality it will always accelerate it slightly forward also. And as you tilt the wing backwards you will produce more forward movement and less downward.

You're on the right track. Induced drag is caused by a rearward component of aerodynamic force. And to be certain, whenever there is lift, there is drag. 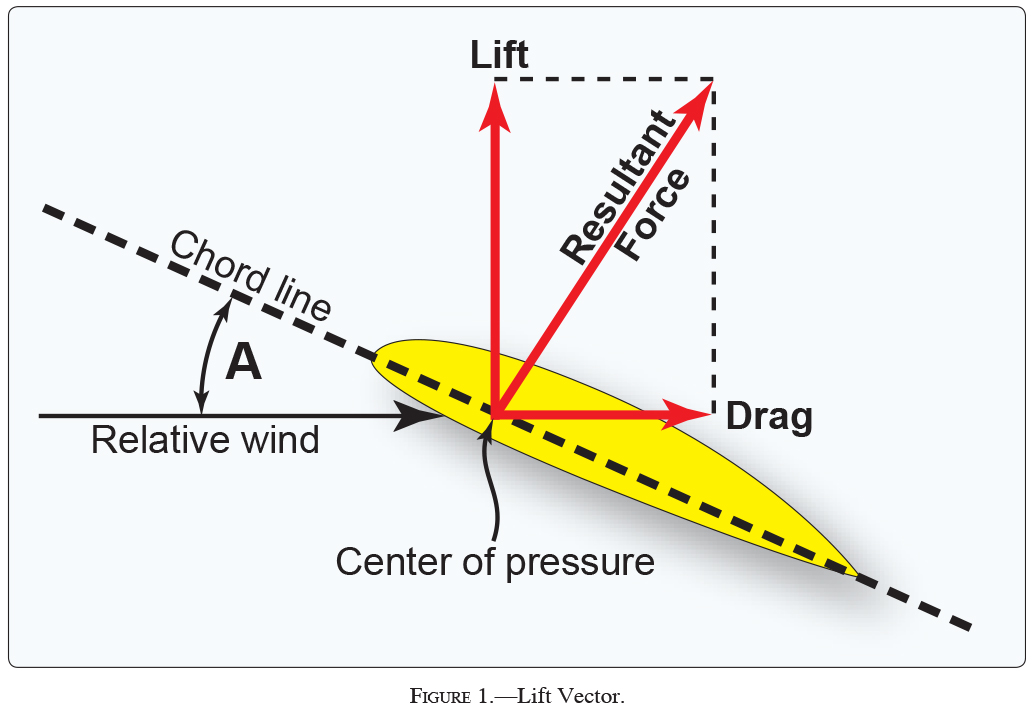 The more a wing "plows" at slow speed, vs "planes" as higher speed, it will create more induced drag.

So? A short wing deflects less air so does so at a higher deflection compared to a long wing. In other words, high aspect ratio wings (sailplanes) have a higher lift to drag ratio than low aspect ratio (stubby) wings, all else being equal.

All of which is why the vector points back a bit - and there's a drag component.

Not the answer you're looking for? Browse other questions tagged wing lift drag angle-of-attack wing-tip-vortex or ask your own question.

37
How does an aircraft form wake turbulence?
11
Does the downwash created by induced drag increase or decrease lift?
9
Is induced drag essentially nothing more than a specific type of form drag?
4
How does the aspect ratio of a wing impact its lift?
7
How to recognize the horizontal winglet in the Horten design, or the experimental glider in this video?
6
Why is induced drag less on a high span wing?
8
Is induced drag not caused by tip vortices?
2
What is formula for induced drag in stalling regime?

6
Why is induced drag less on a high span wing?
8
Why do wall-to-wall airfoils in wind tunnels produce no (or infinitesimal) downwash?
0
Do wingtip vortices cause a decrease in the lift component of aerodynamic force, and do planes need to pull more AoA to compensate?
3
Does shrouding a propeller minimize induced drag by equalizing the downwash velocity along its blades?
2
How do endplates reduce induced drag?
1
How does wing aspect ratio influence lift and drag?
2
Why does the effective alpha/CL increase at wingtip of swept wing?