How large are the banners that are trailed behind small planes for advertising?

How large are the banners that are used for aerial advertising, and how much do they normally weigh? 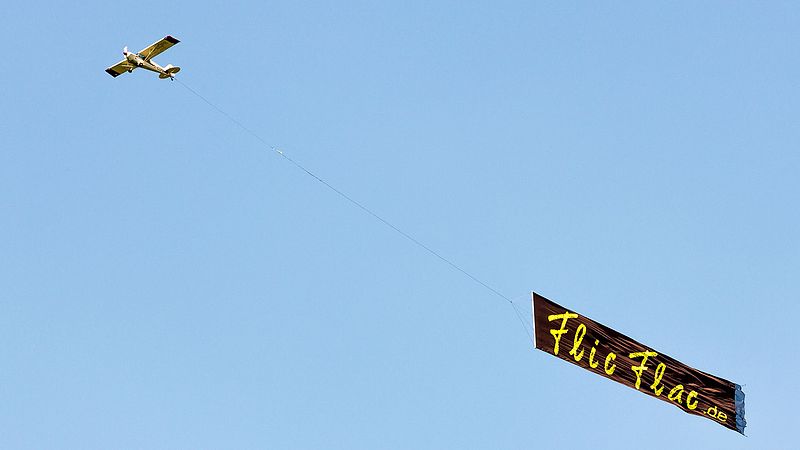 Pre-911 I towed banners, and towed them with a C172 and a C182. Parasitic drag of the banner is the limiting factor. We had different letters, and for the C-172, the letters were about 1.5 meter block letters, during the spring and fall, when the temps were below 20C about 18 to 22 letters was the max. Climb performance in the 172 was about 150 FPM. In hot weather, up to about 40C, the max was about 12 letters with the C172. The C182 could handle longer banners, and was used the most during the summer.

The weight of a 20 character banner was about 135 pounds. The banners are made up by a crew on the ground, and then hooked on a low pass over an area adjacent to the runway. Similarly, a low pass would be made to drop the banner.

The letters we used the most were red synthetic rip-stop fabric, and they were repaired with a sail / parachute sewing machine. Later, just before 9-11, we got White / Black letters which were out a spun fabric like Tyvek. The banner business died in 2001 due to 9-11, with TFRs (Temporary Flight Restrictions) over major sporting events. NFL did not like banners being towed near games, and the emergence of TFRs effectively blocked banner towing.

FWIW, banner towing is more risky than glider towing, even though the gliders weigh more, they have less drag. (Although I used different aircraft for each.) Also if a letter tears, or gets loose, the flapping and increased drag can substantially impact the drag, and climb performance.

The letters and spaces can be made of a soft nylon type material that is extremely light. (there are different materials available, but all are made of durable, light-weight material).

The number of letters and spaces vary based on the type of tow airplane being used. My experience many years ago was with a Cessna 172 (150 HP) and it could tow up to 32 letters and was about 5 feet tall. The problem was primarily the drag caused by the banner and not so much the weight. Operating the engine at the top of the green arc (engine rpm) resulted in 80 kts airspeed.

To add to mongo's and 757toga's answers, during my time towing in Central Florida in the late 00's, in addition to the 5' letter banners, we also had 8' letters that we often used when towing over Orlando, which often made it impossible to fly below 1000'. The 5' letters would have been too small to read at that altitude, so we used the 8's. We used a Husky and later an Agcat to do this. The operation had also previously operated a -172 and I heard the operation also picked up a couple of SuperCubs in the years after I left. For 5' banners we usually stuck to ~40 characters or less, while for 8' banners we'd go with 18-20, which usually ended up being just the name of the business or website we were advertising.

I don't remember weights off the back of my head, but by far the heaviest components were the lead poles themselves (the letters were quite light by comparison), and I don't remember really struggling with any but the absolute longest ones, on the hottest days of summer; I only weighed about 150 pounds myself, so I'm quite certain that a 20-character, 5'-letter banner no longer weighed the 135 pounds mongo quoted by the late 00's.

FYI, the picture shows an example of a billboard, not a letter banner. Billboard are built to order from a printing shop, and are far less draggy, so can be made significantly bigger than letter banners. It is also possible to combine the two; we had a couple of billboards, for some of our regular customers, that featured attachment points for letter banners so they could add a custom message on each flight (usually special events or sales)

Personally, I liked billboards better than letter banners, not least because I hated building the letter messages. Large billboards could be an unholy pain to pack up on windy days, however, especially if you were working by yourself.

Lastly, the banner towing business is still very much alive, even though it's down from it's late 20th-century heyday. Sporting events still advertise, including the major ones (e.g. we towed in Tampa for the '09 SuperBowl, and the Daytona Beach-area racing events, along with Orlando-area college football matches were one of most lucrative sources of repeat business), though they do typically require that towing activities stop when the TFR goes up, about an hour before the event starts. The TFR around Disney also got significantly reduced and it is now possible to tow much closer to the park.

There's no denying that the 00's were very rough on the industry and many operators have left, but from what I've seen in social media feeds of folks I worked with and that are still doing this, it looks like things have reached something of an equilibrium.

35
How do airlines pay for their planes?
40
Why don't airlines load their passengers like freight?
9
Are tripropellant jet engines a viable way to increase fuel efficiency for large commercial airplanes?
5
For a large commercial plane on landing, does the L/D ratio increase, decrease, or not change much?
2
What is the difference between landing weight and end-of-mission weight?
3
Which are the requirements for the water supply on board?
27
Why are airlines so concerned with checked baggage weight?