What are possible explanations for fuel being expelled in this video?

In another question, I asked about whether or not a fuel spill would be reportable or not. The answer was "no", because the aircraft was not in flight.

What are the possible causes of the spill demonstrated by this video? 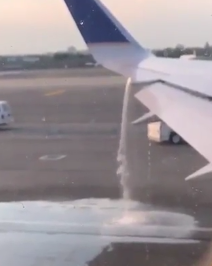 I can think of 4 possible causes, 3 of which can probably be discounted.

This is the only authoritative source I could find showing the fuel jettison switches.

All supposition of course but a strange incident. I'm sure there may be other possible causes and I'm sure that comments and other answers might expand on this.

Not the answer you're looking for? Browse other questions tagged fuel incidents fuel-systems fuel-dumping or ask your own question.

2
What is a possible reason for an L-1011 wing fuel tank overflow?
6
Would a “fuel leak” at the gate be a reportable incident?

43
When are aircraft required to dump fuel for emergency landings?
6
What factors determine where an aircraft can dump fuel?
28
Was this flight a fuel emergency?
9
What is the minimum altitude for dumping fuel?
3
How does this fuel pump work?
6
What is the fuel consumption of an aircraft in a holding pattern?
3
What are the dimensions of an NPT pipe for fuel systems?
6
Has fuel boiling ever been an issue for high altitude aircraft?