How does a large cargo plane like the C-130 Hercules take off and land in such a short distance?

So I was at an air show and saw a C-130J Super Hercules showcasing its capabilities.

The take-off distance it covered was amazingly short (I guess equal to fighter jets), even though it uses propeller based engines. The landing was also super short.

Takeoff and landing distance have a lot of variables.

One is certainly thrust. The plane is designed such that it has enough thrust to reach takeoff speed within the available takeoff distance. For landing, the propellers are able to reverse the thrust and add extra braking power to stop in a shorter distance.

Another variable is landing and takeoff speed. If you lower takeoff and landing speeds, it takes less distance to get going and to stop. Being a propeller plane with a straight (non-swept) wing, it is designed to fly slower than jet aircraft. This means the plane needs less angle of attack to fly at slower speeds. The C-130 also has very large flaps for this purpose, and they contribute to lowering takeoff and landing airspeeds in two ways. First, the flaps are very large, which adds more wing area and also deflects more air downwards, increasing lift. Second, the flaps are placed directly behind the engines, which allows the flaps to direct some of the engine thrust downwards, further increasing lift.

Weight is also important. While the C-130 is designed for good performance at 155,000 lb, and can fly at up to 175,000 lb, it will be much lighter in a demonstration. From an empty weight of 75,562 lb, fuel and crew will still leave it well below its typical operating weights. The lower weight means that takeoff performance will be increased by better acceleration and a lower liftoff speed. Landing performance will also be better with a lower landing speed and better deceleration. 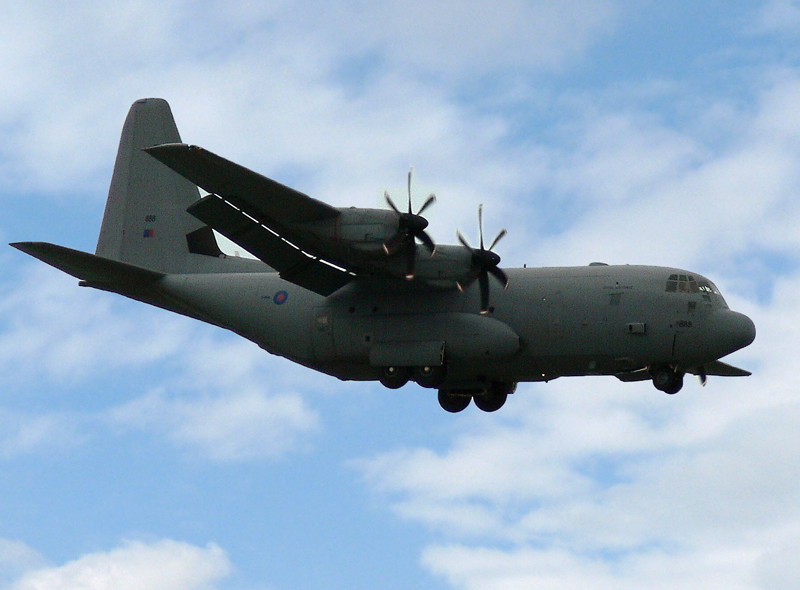 This is a significant reason for the C-130's performance that you witnessed. "Assault" takeoff/landing speeds are lower than normal speeds, and closer to stall speed. Also there are some weight limitations. Further, the crew must be specifically trained.

Any idea of a smooth landing is thrown out the window. The intent is to "plant" the wheels at about 300 feet down the runway. That is, transition immediately from approach attitude to actually landing rather than assuming a touch-down attitude and letting the aircraft float down to the runway.

The nose gear is pushed to the ground and the instant the wheels are on the ground the props are thrown into full reverse, now pushing air forward. At the same time the pilot puts all his might into mashing the brakes. He would "stand on the brakes" as we say. The yoke is also pushed full forward which puts as much weight as possible on the landing gear. The anti-lock brake system is critical here, preventing skidding out of control and blown tires.

In Vietnam, in combat conditions, 130 pilots would put the props in reverse before touching down. If you've seen the video on YouTube of a C-130 landing on an aircraft carrier, they did it there too.

J's Props are a Huge factor

The performance boost of the J models thanks to the new prop and engine is amazing vis-a-vis the older models. But fundamental airframe limitations are still there. Nonetheless more blades (6 vice. 4) and the "un-ducted fan" design simply pushes more air.

An empty airplane with a light fuel load of course maximizes the short takeoff and landing performance.

Not blown flaps. Just because the props push air over the wing does not make it blown flaps. Otherwise, yes, the C-130 was given lots of flapage precisely for this purpose.

the props are turbo props (more specifically the Rolls-Royce AE 2100 with 4.6k shaft horsepower) and very efficient propeller blades. This combines into a takeoff distance of 953 m at 70 ton, and at the air show they would have kept the plane nearer the empty weight (which is half that) which shortens the needed takeoff length.

To compare the Lockheed C-130 Hercules has a slightly longer takeoff distance at the same weight but only needs half that when the weight is reduced to 36 ton.

These propeller blades can change their pitch which can reverse the thrust direction, plus the wheel brakes (even large jets use mostly wheel brakes see this answer)

Propeller driven aircraft usually have a better acceleration/deceleration rate compared to similar jet driven aircraft. This, combined with a straight/tapered wing, instead of a swept wing, and large blown flaps (as stated by fooot) make an aircraft which is able to take-off and land on very short runways.

Not the answer you're looking for? Browse other questions tagged aircraft-design landing takeoff c-130 or ask your own question.

30
For large jets, what is the primary means of slowing down after landing?

22
Is it legal and safe to take off or land in zero visibility?
11
How did the Wright plane takeoff/land?
8
What are the meanings of various reference lines and sections in a take-off distance graph?
4
What runway length and width is needed to land a G650 and take off?
16
How does a taildragger take off? Does it rotate?
6
Under which conditions is full rated power instead of METO power required for takeoff (DC-3/C-47 with Pratt&Whitney 1830 twin wasp engines)?
6
Is there any way to reduce the noise and vibration in a C-130 Hercules?
29
Why do most airliners have underwing engines, while business jets have rear-mounted engines?
10
What are the disadvantages for using short-field take-off technique?