What causes a "BATT DISCHARGE" CAS message on the Phenom 100E?

In the Phenom100 POH the descriptions for the "BATT DISCHARGE" CAS message is "During a normal system operation, at least one battery is discharging."

I'm a bit confused as to what exactly does normal operation mean.

And most important where can I find this information? I have not been able to find it in the POH or any other manual

I've also found this video on youtube but it seams to be from an older version and while it is showing the message during the first engine start it doesn't show it for the second when BATT1 should be discharging for sure because it's used to power the DC buses. Moreover this video contradicts what I know for sure from the EV and the simulator.

I am not into the Phenom 100E nor the avionics.

However, me and many others think that there is not much space for interpretation on this message. 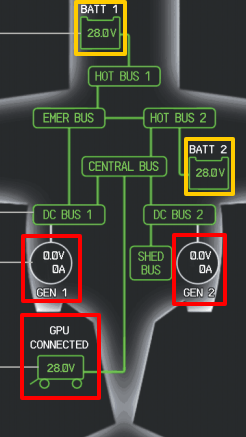 This is the electrical status page as shown on the G1000 of the Phenom 100E. I marked the batteries yellow and all parts actively generating electricity and affecting load of the batteries in red.

When will BATT DISCHARGE pop up?

BATT DISCHARGE will pop up, if the load on the batteries is higher than the charge. This applies in following situations:

What we see in the video

Unfortunately the video doesn't show, when engine Nr. 1 has started and is stabilized. It would be interesting.

As already said, I am not a pilot nor an engineer and only have the knowledge I have self-taught. On this knowledge-basis, I would say following looks most logic for me:

The GPU delivers only a small amount of electricity to the plane. It can't balance the load of the battery. I don't know if this is possible, but looks logic for me. After engine start, the generators of engine Nr. 2 provide the aircraft with lots of power, enough to charge the battery and to start the other engine.

So, when I look at the facts, it looks like a weak GPU for me. However, there is still one question: Why is there no BATT DISCHARGE when starting Nr. 1? My theory is: It looks like there is some sort of delay in the CAS-System. As we have seen in the video, the GPU is already indicated to be disonnected on the MFD, but the CAS still says it is connected. Maybe the message BATT DISCHARGING hasn't appeared because of the delay. We lack the last seconds of the video, so we don't know if the message maybe appears or the generators provide electricity early enough, before appearing.

(I think this question needs more attention. It's a nice puzzle question that deserves much more upvotes.)

The shed bus powers non-essential aircraft systems. In the case of the phenom 100 this is things like the air conditioning, passenger power sockets and entertainment systems, the toilet and some lighting.

The shed bus is the first thing to lose power (be shed) should the aircraft not be generating enough electricity through, for example, a generator dropping offline.

From my question about the shed bus by sp1.

Not the answer you're looking for? Browse other questions tagged aircraft-systems avionics electrical-system embraer-phenom or ask your own question.

3
How to interpret the electrical information on a G1000 T206H?
0
What does "ENG 2 REV PRESSURIZED" ECAM message mean in the Airbus A32F?
13
What causes the phase to change in a VOR?
13
What is the shed bus in the Phenom 100?
6
How does the automatic battery cut off logic prevent complete battery discharge on ground in the A320?
9
What are possible causes for the flaps not deploying on a Cessna 172?
0
What are the ASTERIX CAT010 message types 005 and higher?
6
What would cause a Cessna 182T G1000 to show red X's on Manifold, Fuel, M & S Batt Amps?