What is this white rectangle painted on runway 23 at KCRW?

(Related to this question.)

Runway 23 at Charleston, WV (KCRW) appears to have a (roughly) 500' x 50' white rectangle painted on the touchdown zone (I've added red arrows pointing at each end of the box): 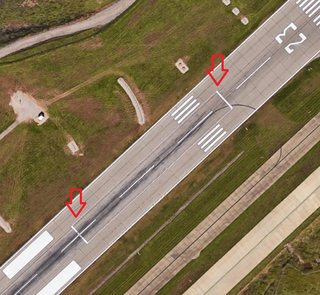 What is it used for?

Seems to be touchdown zone markings for assault landing practice by C-17's. For assault landings, the standard is to touch down in the first 500' of the Landing Zone (LZ), and to go around if your mains aren't on the ground by the 500' point. On a dirt LZ, there will typically be panels set out to mark the threshold, the 500' point, and the far threshold -- that way the combat control team which is marking the LZ doesn't have to put out lots of panels, but there are enough for the crew to get what they need. The 500' markings on the main runway would give enough information to the crew to simulate landing on an LZ, even though the actual runway is far longer & wider.

This frame below shows examples of C-130's practicing assault landings, and you can see orange panels at the threshold and 500' points in them:

Some places, KLRF (Little Rock Air Force Base) for example, had an actual 3500' long paved strip for crews to use for assault landing practice, with permanent markings at the threshold and 500' points (2013 imagery shown below):

Most airports don't have the budget to create a separate runway for this specialized requirement, so some sort of markings on the main runway are used instead.

17
What does it mean when a runway's safety area is not standard?

25
What is this runway marking on Kirkwall Airport's runway?
22
What are these symbols on the runway?
30
What are these large yellow circles painted across the runway?
12
Why five touchdown zone markings for only one aiming point?
10
How do pilots use stopway, EMAS, clearway and displaced threshold?
9
What is this pattern on this runway?
10
What are those markings on runway 25L at Frankfurt Airport?
10
How will aiport operations at KOAK be affected when taxiway W is promoted to a runway?
2
Why aren't runway numbers painted in a higher aspect ratio?
18
(Updated) Why do vertical distances appear much larger than horizontal distances?