Why does the helicopter's nose go down when the cyclic is pressed forward (in a hover)?

Helicopters have hinges on top of the rotor mast, allowing the rotor to be tilted longitudinally (forward/aft) or laterally (sideways).

Why does the helicopter fuselage tilt up/down when the cyclic stick is moved longitudinally? It should not be influenced by what the rotor does due to the hinge, right? 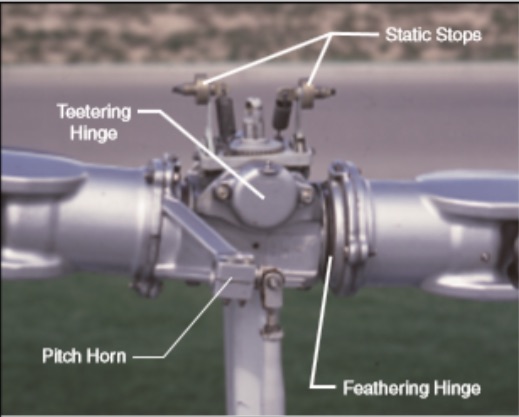 I think you might be confused by what the hinges do. In the example you show, the teetering hinge, which is only present in 2 blade rotors, causes both blades to tilt, or "teeter" or see-saw, together. It is not possible for both blades to rise or fall in normal operations. The feathering hinge is not really a hinge at all. It is a bearing in the blade cuff which enables to blade pitch angle to change, caused by the position of the swash plate, by rotating the blade within it's cuff.

Consider a helicopter hovering in a no wind situation - simply because adding wind needlessly complicates the explanation. I will also assume a counter-clockwise rotating rotor. Simply reverse the explanation for a clockwise rotor.

The total thrust vector of the rotor is vertical, perpendicular to the centre axis of the disc. It has a zero horizontal component so no force is applied longitudinally or laterally to the helicopter and it remains in a fixed position.

When you push the cyclic forward, the pitch of the blade at the leftmost position is increased, increasing the angle of attack and therefore the lift. Due to precession, the blade rises at the back of the disc and falls at the front, tilting the entire disc forwards.

The total thrust vector remains perpendicular to the disc and since the disc is tilted with respect to the fuselage, is now comprised of horizontal and vertical components. It is the horizontal component which accelerates the helicopter in the direction of the tilt.

So there is a force (lift) lifting the rear of the disc and lowering the front. This force is transmitted through the rigid rotor drive shaft and pushes the nose down and pulls the tail up. Another way to think about this is that you are applying a force at the top of a lever, the drive shaft, which is above the centre of gravity and therefore causes the fuselage to rotate in pitch. The helicopter will continue to accelerate until the additional drag equals the horizontal component.

Helicopters also employ horizontal stabilisers which produce lift to push the tail down with increasing airspeed so the nose down pitch in cruise is reduced.

Therefore, pushing the stick forward and holding it at some attitude (when flying VFR you select a speed by adopting the nose down attitude for that speed which is learned from experience and practice followed by small trimming to hit the desired speed) will cause the nose to pitch down and the aircraft to accelerate until the trimmed speed is attained.

For the same reason you are pushed back into your seat when you press the throttle in your car but the speed hasn't increased significantly yet. Also known as horizontal acceleration. As soon as the rotor plane tilts forward, it applies forward thrust which creates forward acceleration. The rest of the vehicle is hanging below the rotor so its inertial mass delays its motion, causing it to swing behind. The angle is the arctangent of the horizontal acceleration divided by the vertical (i.e. gravity, 9.8 m/s^2 or 32 ft/s^2).

The question did not mention a hover condition, and it should have. It is answered partly by:

But there is a much more direct cause of fuselage tilt in the hover, which is mostly overlooked in the discussion panels: rotor hinge moment. Deflecting the cyclic causes the rotor tip path to deflect, due to flapping. Fuselage tilt is used as a feedback cue to cyclic input, by use of rotor hinge offset.

The rotating blades are subject to centrifugal forces, which pull the rotor hub in the plane of the rotor deflection. As soon as the rotor plane changes as a result of cyclic stick input, the resulting rotor hinge moment will change fuselage angle accordingly, providing the desired feedback cue.

A teetering rotor such as on Bell 212 and R-22 does not produce this mechanical rotor hinge moment. In flight, a helicopter is suspended from its rotor, with the Centre of Gravity underneath the centre of lift, unless the rotor can apply a hinge moment to the fuselage. With a rearward CoG and no hinge offset, the following could happen:

The helicopter has taken off vertically, nose tipped up first, and cyclic forward was input. If the rotor had a hinge offset the fuselage would tilt forward, but with a teetering hinge like in the question there is no centrifugal force acting on the hub, and fuselage position now depends only on CoG location. The upward nose angle has consumed some of the useful forward tilt of the cyclic stick. Visibility is impeded. Fuselage tilt provides no direct feedback of the cyclic position. 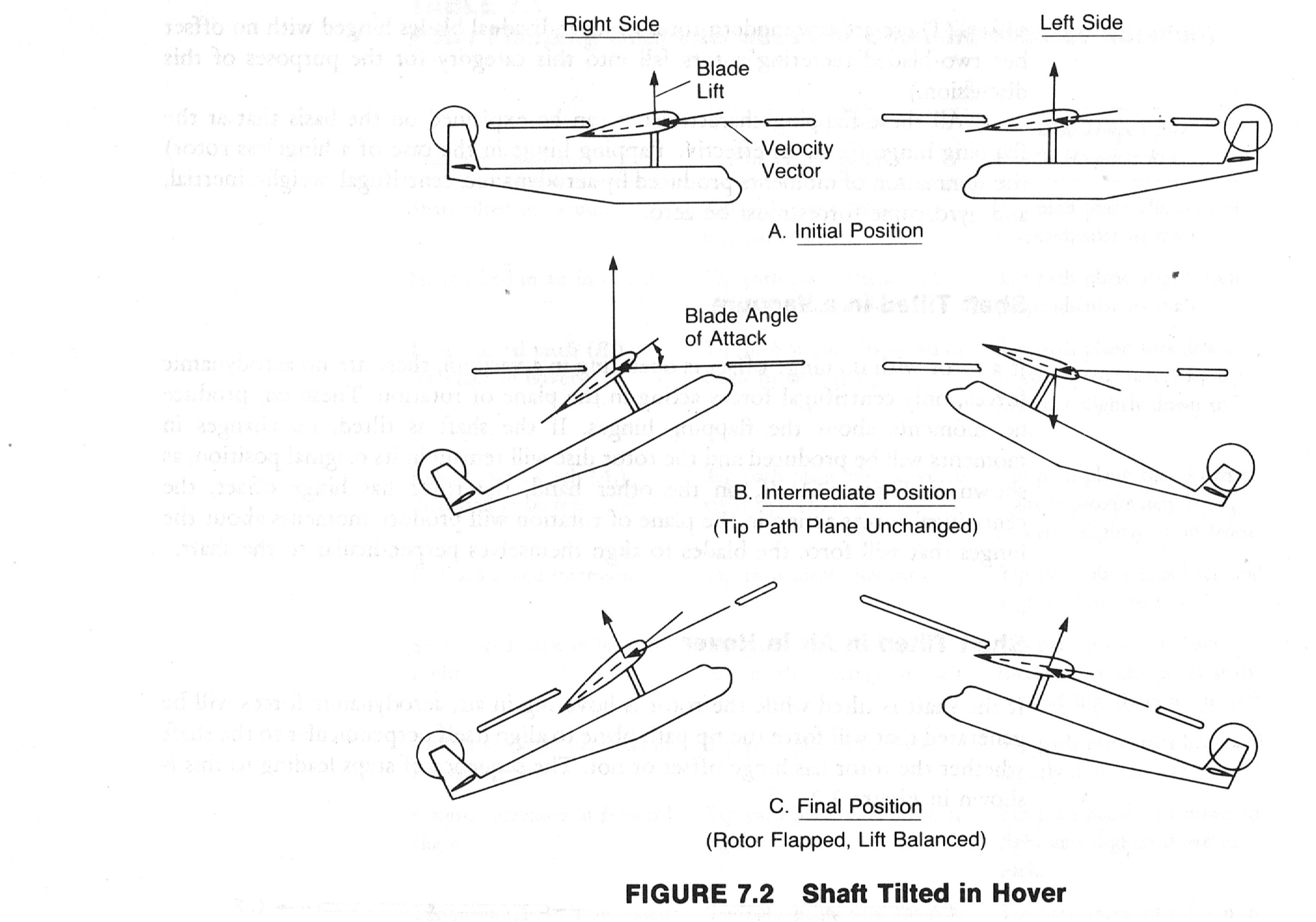 Fortunately there is an aerodynamic rotor hinge moment, created by the aerodynamics of flapping. The picture is from Helicopter Performance, Stability and Control by Raymond Prouty. It shows that at first, the rotor acts as a gyroscope and stays in its plane. But the blade feathering is referenced to the shaft, and angle of attack of the right hand blade is increased, left hand blade decreased. The rotor will then flap until it is perpendicular to the shaft. With teetering rotors, there is an indirect aerodynamic coupling between fuselage and rotor shaft. This provides the same cues as the hinge offset solution but at a slower rate.

No fancy drawings to accompany this, but...

When the cyclic is pushed forward, it is the same as pushing forward on the stick of an aircraft. The nose will drop. In the case of the helicopter, it drops because the pitch of the main blades is altered only on a portion of its arc, resulting in a lift on the back end and a push down on the front end.

One thing that makes a helicopter different from fixed wing aircraft is - it gets forward propulsion from directing the lift from the rotor disc slightly forward instead of straight up as in pure hover. So, to move out of hover, one puts the nose down to get forward propulsion and acceleration, and adds power and overall rotor pitch (collective) to counteract the loss of pure vertical lift from tilting forward.

The helicopter moves forward until it picks up enough speed that the airflow from forward speed over the spinning rotor disc produces lift (the spinning disc now acts like a wing), and the helicopter enters what is known as forward flight mode - it now flies in a manner similar to a fixed wing airplane. Takes a lot less power to hold a helicopter in forward flight than in hover, because the forward flight airflow over the rotor disc is producing lift, instead of using the rotor's pull (powered entirely by the engine) to produce all of the lift.

26
Would a helicopter with the blades on the bottom fly the same, if at all?
5
How does a helicopter hover?
3
In helicopter's forward motion, how is the forward pitching moment taken care off?
3
How are pitching and rolling moments transferred from rotor to the body?
2
What methods are used for calculating maximum takeoff windspeed of a helicopter?
0
Are there any helicopters with tail rotors where slip-skid ball may be centered even when fuselage is streamlined to the airflow in cruising flight?

9
How do helicopters handle P-Factor?
13
What causes hunting movement in helicopter rotors?
18
In helicopters, why not have electric motors controlling blade pitch?
8
Can a helicopter be "stalled" by pulling too hard?
7
What is the best word for lateral translational movement in a rotorcraft?
18
How does this RC helicopter keep itself upright?
1
How Helicopters Change Attitude (Gyroscopic Precession or Thrust Vector Tilt)
0
Are there any helicopters with tail rotors where slip-skid ball may be centered even when fuselage is streamlined to the airflow in cruising flight?
3
In helicopter's forward motion, how is the forward pitching moment taken care off?
3
How are pitching and rolling moments transferred from rotor to the body?