ETOPS 330 vs ETOPS 370 etc; how are the exact minute ratings derived?

What extra abilities would the 370 type have demonstrated that the 330 didn't have? Was it just that the test flight on single engine was longer? Or something else in the design limits the type to a 330 minute rating while on the drawing board? Is it the MTBF of a component? Or is the 330 minute time back calculated based on actual empirical testing and the associated failures?

On ground and maintainance procedures is there any substantial difference when dealing with a ETOPS 330 aircraft vs and ETOPS 370 aircraft?

If there is a formula currently used to generate an ETOPS time, no regulatory agency has made it public that I can tell. ETOPS originally grew out of a "60-minute rule" that was the result of earlier distance-based rules (see this report for a thorough history). My guess is that 60 minutes was a case of "well, that sounds good" rather than the result of any rigorous analysis. From there, it's mostly been manufacturers slowly pushing and getting approved for longer and longer extensions (usually just a percentage increase that results in round-ish numbersâ€”again, this is policymaking, not engineering).

However, take a look at the formulas on pages 9â€“11 of this report. I hesitate to declare them the way to generate an ETOPS number because the report is thirty years old and a lot of it is critical of the methodology, so the regulators may have changed their approach between then and now. In fact, the report does not explicitly state that the formulas within were in use at the time, either. Nevertheless, if there is a formula in modern use, it likely uses a similar approach of quantifying the probabilities of failure and using a factor to convert them into a do-not-exceed diversion time.

The difference between certification at 330 minutes (777) and 370 minutes (A350) may be due to FAA vs. EASA methodologies and/or decreases in inherent failure probabilities as technology matures. With that, I doubt there is much difference in maintenance of a 777 vs. an A350 (at least as far as ETOPS goesâ€”obviously their construction necessitates very different maintenance programs), as that 40-minute increase for the A350 was approved without any in-service maintenance data. It may be different for the 787, which was not initially certified at 330 minutes.

Going forward, I have no doubt we'll see ETOPS 430 and above. Airbus already toyed with 420 minutes for the A350, and perhaps we'll see that after some time in service. At 420 minutes, there are only a few non-compliant routes; I expect that, eventually, any new twin will be able to fly unrestricted between any two points within its endurance.

The answer ETOPS minutes categorised arrived from the Engine failure diversion range and the time is calculated based on OEI (One ENgine Inoperative) max range distance or other speed selected by applicant. I do agree with previous answer there is no point to go to 300+ minutes. see image. 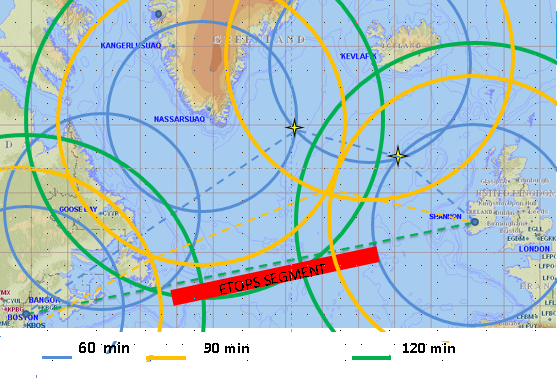 The north and south pole concern is more critical and additionally there is Polar certification where the operator have to prepare the polar survival suit for crew member and additionally passenger arrangement incase they divert to this remote airport in advance (such as food, clothing, accommodation, etc)

Not the answer you're looking for? Browse other questions tagged etops or ask your own question.