What is the practical usefulness of a small home made wind tunnel?

The short answer is NO!

To be more clear if, as an example, one has a small wing and measures its drag coefficient, with the help of a small wind tunnel, this coefficient is simply useless for a wing of the same shape but with a surface: 25, 50, 100 times larger.

"Scaling from the tunnel to the Wright Flyer ... showed the Wrights’ drag prediction to be 300% too high, resulting in highly inaccurate efficiency predictions. ... the Wrights’ quantitative data was not applicable to full scale design." (From the study of Michael Gary Dodson)

The Wright Brothers just wasted their time with the wind tunnel they had built. They could not have used the numerical data obtained from such experiments for designing large wings.

The two inventors from Dayton just copied the Voisin - Farman - Delagrange wings, which they saw in 1907 when they spent about 6 months in Europe, and then built a plane in 1908, powered by a French engine, Bariquand et Marre, and flew for the first time near the town of Le Mans, on August 8, 1908.

For more information you can read this new free book:

A. I. Root, the liar number four after the Wright Brothers and their mentor, Octave Chanute 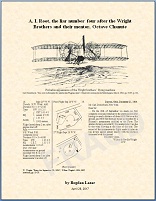 The main two witnesses of the Wrights, Amos Ives Root, from Medina, Ohio and Octave Chanute from Chicago did not see the two inventors flying on September 20, 1904, and October 15, 1904, respectively, as they claimed.

The December 17, 1904, "successful" trials performed near Kitty Hawk (an isolated place far from civilization) represent nothing in comparison with the 105 flights at Huffman Prairies (near Dayton), claimed by the two brothers for the year 1904. No credible witness saw them flying that year.

There are some things about this wind tunnel that are not as good as the best wind tunnel experiments for actual aircraft. Obvious concerns are that the wing is very close to the bottom of the wind tunnel (relative to the size of the wing), which means there will be a kind of "ground effect." (Notice how at the high level of attack shown in your photo, the airflow underneath the wing is almost completely pinched off.) The relative nearness of the top of the tunnel could have an effect too. The setup shown will not tell much about what happens at the wingtips of an aircraft--an airplane with huge vertical plates attached to the end of each wing (which is what this setup models, with its wing tip practically flush to the side wall of the tunnel) will fly differently than an otherwise identical aircraft without those vertical plates. Merely testing the wing also doesn't tell us anything about the aerodynamics of the fuselage, which will affect how well the aircraft flies.

There are also scaling issues having to do with things such as Reynolds numbers and (for jet aircraft) Mach numbers. Practically all wind tunnels have these kinds of scaling issues. The "aircraft" that are tested in them are generally scaled-down models. This is something that wind-tunnel experts have learned to deal with (see Peter Schilling's answer).

But while those are things of concern to people building the latest passenger jets and fighter aircraft, where flying just a little better than the competition is very valuable, I think a wind tunnel experiment like this is meant to investigate more basic properties of wings. When the Wright Brothers were building their first aircraft, for example, the aerodynamics of wings was not very well understood at all. Even a few years ago, incorrect notions about wings were widespread (there are whole pages of the NASA website debunking them). If a wind tunnel like this gives you information about the forces on the wings that is 30 percent more or less than the "true" values, you're still way ahead of someone who is basically just guessing about the forces by combining naïve intuitions about the dynamics of the airstream with calculations based on actual speed, density, and so forth.

My biggest complaint about the design of this apparatus is that the arrow attached to the wing, pointing to the angle scale on the back wall, cannot measure negative angles of attack. This could be fixed by mounting the angle scale with the straight edge of the scale vertical instead of horizontal.

The Wright brothers certainly thought so, and with obvious results. I highly, highly recommend McCullough's book if you'd like to learn more:

Though such apparatus did not look like much, it was to prove of immense value. For nearly two months the brothers tested some thirty-eight wing surfaces, setting the “balances” or “airfoils”—the different-shaped hacksaw blades—at angles from 0 to 45 degrees in winds up to 27 miles per hour. It was a slow, tedious process, but as Orville wrote, “those metal models told us how to build.”

For a more contemporary look at scaling methods, see this paper (there are many others, too).