What are “ground-based navigation systems which provide vertical guidance” and how do they compare to altimeters?

I am a total layman when it comes to aviation but for a school presentation I am trying to understand the reasons why Air Canada 624 crashed while trying to land on runway 05 at Halifax (CYHZ). I have read the investigation report and the press release the Air Canada pilots union have published. The press release says:

ACPA strongly advocates for all major airports to have the necessary equipment to offer both lateral and vertical guidance and high intensity lighting to allow pilots to orient aircraft for landing.

Many runways at Canada’s largest airports lack the ground-based navigation systems which provide vertical guidance – that is, the distance between the aircraft and the ground – to orient an aircraft for landing.

I was under the impression that an altitude reading is always available through the radio altimeter or the barometric altimeter.

Why would such a "ground-based navigation system" that provides "distance between the aircraft and the ground" be needed? What can it provide that the regular altimeters on board cannot provide?

An ILS consist of:

An ILS is usually coupled with an DME (Distance Measure Equipment), which tells the distance between the aircraft and the runway threshold. Using the glideslope angle together with the horizontal distance, one can compute the height above runway level.

From page 12 of the report:

AC624 was then cleared for the straight-in LOC approach ...

Which means only the lateral (left or right) component is available, there is no signal which tells the pilot whether they are high or low relative to the ideal descent path.

A radio altimeter is not very useful when the approach path leading to the runway has uneven terrain. It tells the height above the ground directly under the aircraft.

A barometric altimeter needs to be calibrated by a reading at ground level. It tells the height above sea level.

Both of these altimeters cannot tell the height above runway level. Therefore the pilots must rely on other data to monitor the descent profile, which increases the pilots' workload. In a situation such as low visibility and high crosswinds, this presents a very challenging situation.

If both vertical and horizontal guidance is available, then the pilots can simply follow this guidance all the way to the runway. They can also program the autopilot to follow this guidance, if suitable equipment is installed on the ground as well as onboard the aircraft. 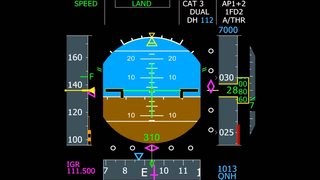 It is possible to compute the relative height by using a DME and a barometric altimeter only. For example, I am now 5.5 nautical miles from the runway threshold, and according to the approach chart, I should be at 1,800 feet. Right now my altimeter reads 1,600 feet. That means I am too low and I should reduce my vertical speed to slow down my descent. This calculation has to be done by the pilot himself and not by a computer. Furthermore the pilot must fly the plane, i.e. adjust the control surfaces, run landing checklists, visually verify the alignment with the runway, talk to ATC, set the flaps etc. A pilot is trained to do all this, but increased workload also increases the chance of making an error.

Not the answer you're looking for? Browse other questions tagged landing approach accident-investigation altimeter non-precision-approach or ask your own question.

4
What are the differences and benefits between/of time-based vs distance-based separation?
2
Barometric altimeter data during high vertical g-forces?
3
Do any aircraft have a “self-contained ILS”?
5
Why, and how, are barometric altimeters accurate enough for approach and landing?
7
Why can a localiser be used without a glideslope, but not vice versa?
32
What does “Ground loops are costly. Fly them until they stop” mean?