The second link given on a Google search for "Breguet Equation" is to a PDF document from MIT. On page 7 of this document is a chart showing L/D ratios for various commercial aircraft (turboprop, regional jet, and "large aircraft") plotted against the year the aircraft entered service. Below is an image of this chart: 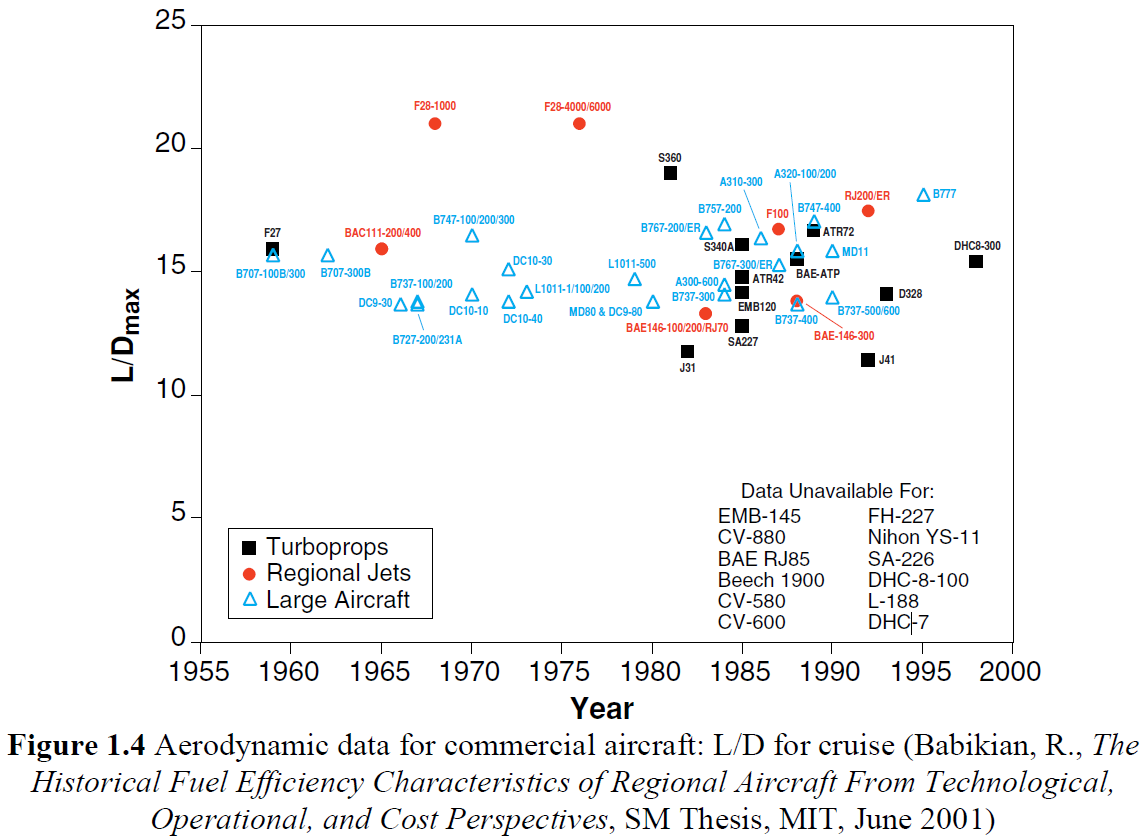 What appears to stand out (at the top of the chart) is the Fokker F28 aircraft.

From an engineering and operational perspective, what enabled that aircraft to have such a high L/D ratio?

Also, I thought that the F50 / F70 / F100 aircraft had the F28's wing (or an evolutionary version). Why didn't these aircraft have an equally good L/D ratio?

Taken as I am with the little Fokkers because I used to walk around the flight line and see them being built, I reckon that's a mistake. The F-28 having a better L/D ratio than the F-27 with its long slender wings doesn't sound right to me. The F100 with its supercritical wing definitely should have better L/D than F28.

The two entries for F-28 in figure 1.4 seem very similar to the entries in Figure 1.9 of the MIT document that you mention.

There is one possible explanation in the analysis of the airfoil and the airspeed it is flown at. A cambered wing, such as the Davis or the DAE-21, will produce superb lift to drag ratios, but at much lower airspeeds than supercritical wings fly at.

The Breuget Equation is as follows:

The faster, heavier plane with the lowest fuel flow rate becomes "tops of the charts" in any year. The graph, though interesting, seems to only point out the F-28 lifts more weight/drag at the speed it flies at per given unit of time, but not per given mile. I would ask more of MIT.

Not the answer you're looking for? Browse other questions tagged aircraft-design lift drag efficiency fokker-f28 or ask your own question.

25
Is there a maximum lift to drag ratio?

4
How to calculate the Glide Ratio from Drag & Lift?
7
How can the Airbus A380 have such a high lift/drag with a relatively low aspect ratio wing?
1
How can I calculate effective wingspan of a high aspect ratio model airplane?
4
How does the aspect ratio of a wing impact its lift?
1
How to scale the data of a wing aspect ratio to correspond to the case of another aspect ratio?
1
How does wing aspect ratio influence lift and drag?
6
Why can’t the F28 be deiced with one or both engines running?
1
What was the lift-to-drag ratio for WWI biplanes?