Why do planes have cross-feed switches or circuits?

Why do planes have cross-feed switches or circuits? Are they to move contents of one tank to another (feed the tank) or to supply the engine with fuel from left side to right or vice versa (feed the engine)?

The fuel system in aircraft generally includes a left and right tank within the corresponding wings. Each tank generally provides fuel to the engines on that wing. The crossfeed valve is used to temporarily connect the two sides of the system. This system allows the shortest route for the fuel and keeps the systems separate, so a leak on one side cannot drain the entire system. The crossfeed valve is generally kept shut for this reason. A couple scenarios illustrate when opening the valve might be necessary.

To keep the plane balanced, both wing tanks should have about the same amount of fuel. However, for various reasons, they could become unbalanced. The crossfeed valve allows fuel to flow from the tank with too much fuel to the tank with less fuel.

Another scenario would be the loss of an engine. In a twin-engine airplane, the remaining engine would need to be able to draw fuel from both wing tanks.

Note: especially in larger aircraft, fuel systems can be much more complicated, with multiple tanks in each wing and also in the fuselage. Fuel transfer also becomes more complicated.

Using the 737 as an example, this is the fuel system control panel with the crossfeed switch in the center. With the crossfeed valve open, turning off the fuel pumps on one tank will cause more fuel to be drawn from the tanks on the other side. 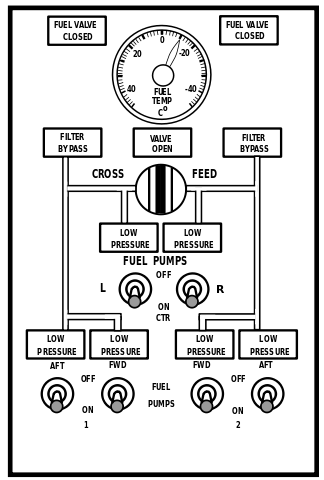 The purpose of the cross feed valve or cross feed circuit in the airplanes is to separate the fuels in different tanks, especially in the wings (both left and right wings and fuselage) so that one tank will not affect another in terms of leakage.

The other purpose is for the emergency use. If left fuel pump encounters a problem, the right fuel pump will pump fuel from right tank and supply fuel to both engine one and two, through the crossfeed that is automatically opened. Vice versa to right fuel pump.

40
Is fuel moved around during flight on a passenger or cargo plane? If so why?
2
How the fuel in the wings is managed in case of an engine failure?

16
What could cause uneven fuel levels in a Cessna 172?
12
Cessna 172/182: Should I set the tank selector to the R.H. tank after parking the airplane?
4
How prevalent are anti-explosion bladders in fuel tanks?
8
What are the differences between intertank valve and crossfeed valve?
12
Can we eliminate the center tank of large passenger planes?
13
Was there a design flaw in the fuel tanks of the MiG-15/17/19/21?
0
How do they fill fuel in big aircraft?
4
Why do the A320's centre tank pumps stop working 5 minutes after the low level has been reached?
6
How is fuel drawn from drop tanks in WW2 airplanes?